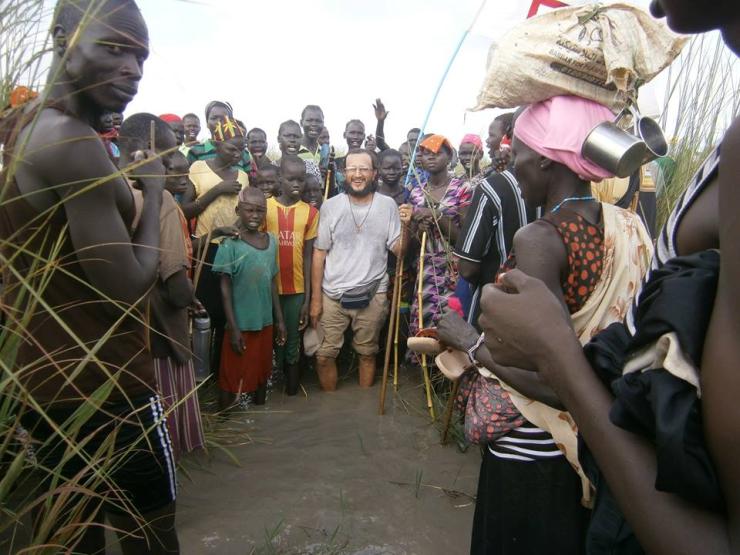 This October, Comboni Missionaries Father Fernando Galarza and Sister Lorena Morales organised a pilgrimage for peace – a ‘Peace Caravan’ – in Leer County, South Sudan, to give thanks to God for the Compromise Peace Agreement that was recently signed by the two warring parties.

The Catholic parish of St. Joseph the Worker is a large mission territory in Unity State which falls under the Diocese of Malakal, in the northeast of South Sudan. It has been entrusted to the pastoral care of the Comboni Missionaries. This mission consists of the four counties in southern Unity State, three of which have been badly affected by the current conflicts, as outlined in a previous article.

The Peace Caravan took place in Panyijiar County, the area which is less affected. The two missionaries who led it, Father Fernando Galarza and Sister Lorena Morales, were accompanied by a few helpers, among them the local senior catechist Michael Makuey.

The Caravan covered about 120 km (75 miles) on foot, and its intended purpose was to bring a message of peace to people affected by perennial conflict. The Missionaries visited 13 Christian communities and held prayers in each of them. Because the pilgrimage took place during the rainy season, they often had to wade through knee-deep water and mud. They had to cross rivers and face a lot of hardship, but they managed to deliver the message of peace to the four corners of that county, which hosts a huge number of internally displaced people who have fled conflicts in the neighbouring counties.

The youth was strongly present, performing their traditional marches and songs of praise. Crowds of thousands gathered at each of the 13 prayer services. Schools in the area cancelled their classes to allow students and teachers to join the peace pilgrimage and attend prayers – supported by the local authorities.

Conflicts began in South Sudan in December 2013. According to the UN Office for the Coordination of Humanitarian Affairs (OCHA), the current conflict “has been marked by brutal violence against civilians and deepening suffering across the country”. Insecurity and active hostilities constrain civilians’ freedom of movement. The humanitarian consequences are extensive. There has been widespread displacement due to the violence, high rates of death, disease, and injuries, disrupted livelihoods, severe food insecurity, and a major malnutrition crisis. Some 5.8 million people are estimated to be to some degree affected by food insecurity. The count of internally displaced people has risen to 1.65 million. Tens of thousands are held in Protection of Civilian (PoC) bases provided by the UN. Over 630,000 people have become refugees in neighbouring countries. There are no clear figures for the number of dead in this conflict; but it is believed that they number over 30,000.

Comboni Missionaries and Comboni Missionary Sisters continue their supportive presence among war-affected communities in the most isolated areas of South Sudan. Their presence of solidarity gives people hope and encouragement in this time of war, fear, despair, and insecurity. A Compromise Peace Agreement has been signed and is under implementation. People hope, with caution, that peace will prevail.