Christmas in Mexico: A Multicolour Feast 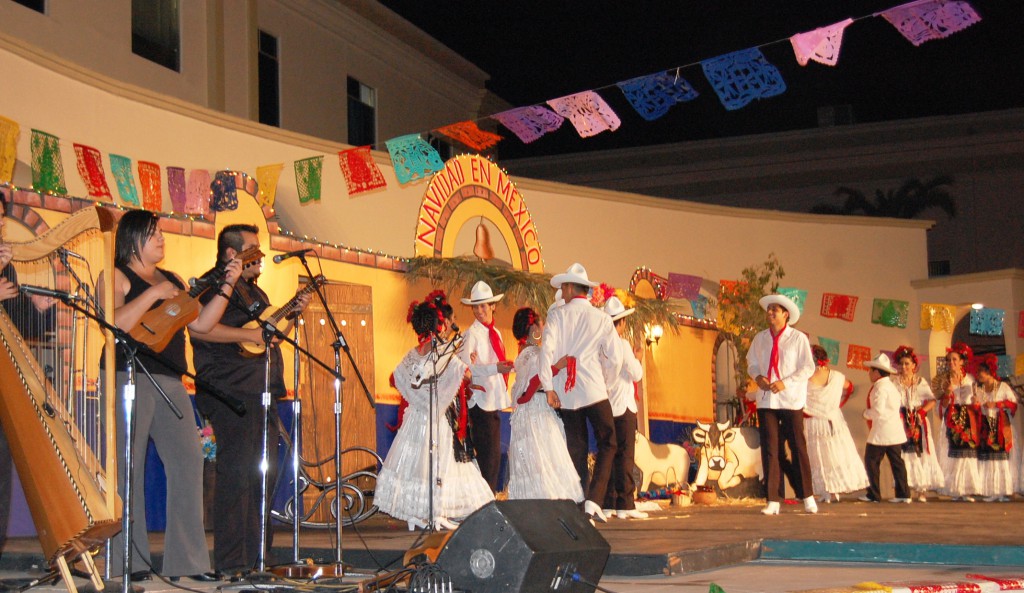 The Mexican Christmas celebration is a combination of Christian spirit and indigenous traits – a fiesta featuring colours, dancing, songs, and joy.

Even though the official liturgical preparation for Christmas begins with the First Sunday of Advent, and December 25 remains the centre of the liturgical and secular celebrations in Mexico, the celebrations begin long before those dates and continue until the beginning of February.

Once the Holy Saints’ Feast ends, Mexico begins to transform: local commercial activities, streets, and houses become colourful. As December begins, family and personal schedules become hectic with dinners, posadas, and pastorelas – gatherings of friends in which good wishes and gifts are exchanged. The celebration of Our Lady of Guadalupe takes place on December 12 – energising the joyful Christmas season.

The Feast of Light begins with poinsettia pots appearing out of nowhere, an enormous number of lights flashing in the city, lanterns, coloured paper, and many more outdoor decorations – even make-believe “snow-covered windows”, at a temperature high enough to melt the icing on cakes!

Through all these events, we see the different elements of a unique “formula for joy” come together. The main distinctive elements of the big Christmas celebration in Mexico are the posadas, the piñata, the rama, and the Noche Buena – explained below.

In the posadas, people gather in a different house every day to re-enact Mary and Joseph’s quest for lodging on their journey to Bethlehem for the census. All the posadas must be attended – and you can meet friends and relatives there whom you might not have seen since the previous posada! Two children pretend to be Mary and Joseph, knocking at (usually two) different doors. They are refused entrance by the first two owners. Then, at the house where the posada is going to take place (usually the third one), the doors open and the celebration begins. People gather to eat and drink traditional Mexican Christmas delicacies like ponche, a water-based drink in which seasonal fruits and cinnamon sticks have been boiled for hours; sometimes alongside a strong alcoholic drink.

There is no real posada without a piñata. The traditional piñata celebration involves the breaking of a paper container containing gifts, especially for children. The piñata sometimes looks like a mere pot filled with fruits, dangling above the children’s heads. Blindfolded, taking turns, they will try to break it. The spectators sing songs and cheer the kids along.

Some of the traditional verses sung are, “dale, dale, dale! No pierdas el tino porque si lo pierdes, pierdes el camino!” (Strike, strike, do not miss your aim, because if you do not hit it, you will lose your way!); or: “No quiero oro, ni quiero plata, yo lo que quiero es romper la piñata” (I don’t want gold and I don’t want silver… all I want is to break the piñata).

In Southern Mexico, there is a tradition – called ‘la rama’ (meaning ‘the branch’) – in which people, particularly children, celebrate preparing for Christmas. This tradition unites songs, dances, and festive cheer. Beginning on December 16, children gather in small groups every night and go around the neighbourhood holding a tree branch – usually without leaves, but decorated with a small representation of the nativity scene, colourful strings of paper, lanterns, oranges and other seasonal fruits, candy, and a depiction of other gifts children expect to receive. From dusk until the end of the evening, they sing in front of every house asking for gifts from the owners.

The children sing along these lines, “Good evening! The Branch comes here to sing for you… to see what you can give us… oranges and lemons for these kids who are great eaters!” The children ask for their aguinaldo – a traditional Christmas gift. The lyrics of this song and those of the songs in the posadas allude to the Child Jesus, the Virgin Mary, and St. Joseph. Most of the time, they receive some candy, toys, and even money as their aguinaldo. The happy children then give thanks for the generosity received with another song: “The Branch now leaves this house with a thankful heart because it was welcomed.” In case they don’t receive anything, the children sing a funny song: “The people living in this house are probably dying of hunger!”

According to historians, the different regional versions of la rama in Mexico originated in indigenous traditions or festivities celebrating the renewal of nature, usually around Christmas. Missionaries added a Christian touch and transformed these rituals with the accompaniment of Spanish musical instruments.

All the celebrations reach their peak at Noche Buena, on December 24. Many families go to Misa de Noche Buena which used to be exactly at midnight, but is nowadays held earlier so the family can gather at exactly midnight to exchange embraces and gifts. Afterwards, there is a dinner with close family members. Many families still keep a little statue of the Infant Jesus in the manger and, while singing traditional lullabies, pass Him to all present to hold. Finally, a member of the family (usually a little boy or girl) places the Infant Jesus in the manger of the nativity scene prepared some weeks earlier.

After midnight, parties often go on until dawn. After catching some sleep, people usually visit other relatives, usually grandparents, with whom the young families were not able to spend the Noche Buena. Feliz Navidad! Merry Christmas!

PreviousChristmas in Peru: The Sun of the Suns
NextChristmas in Sri Lanka: A Harvest Festival