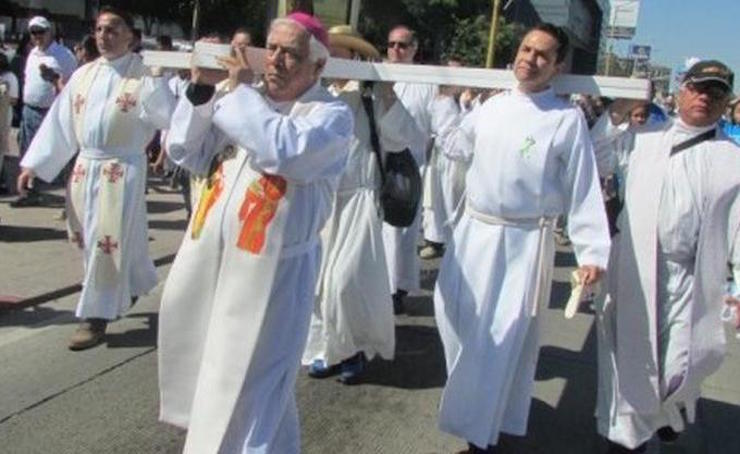 Pope Francis is scheduled to visit Mexico between February 12-17. In addition to visiting the Shrine of Our Lady of Guadalupe, in Mexico City, Francis will also travel to Ciudad Juárez on the US border, and to Chiapas, one of the poorest regions in the country. Many priests in Mexico are subjected to threats and intimidation by the narcos, narcotics traffickers, and by criminals. According to the Mexican Episcopal Conference, thirty-nine religious officials have been killed over the past 24 years.

The photo has been seen all around the world: Father Goyo celebrating mass in a bulletproof vest. The priest said: “I’m not afraid; however, the bullet-proof vest protects me.” He pointed out the bullet holes in the vest – silent witnesses of the last of two ambushes he has suffered at home.

Father Goyo, short for Gregorio López Gerόnimo, is the parish priest of St. Joseph the Workman in Apatzingan, one of the most violent cities in the State of Michoacán in Mexico. This area, called Tierra Caliente, or “Hot Land”, because of the scorching weather – but whose name has also come to signify criminal activity – is controlled by the Knights Templar Cartel, who kidnap, intimidate, extort money, and murder the locals.

Many would like to see Father Goyo dead. But the grouchy-faced priest continues to denounce collusions between local power, businessmen, and drug traffickers, revealing the full names of those involved. His accusations are precise and cannot be wrong. His people are his source.

“I know very well how things work in this area and in many other parts of the country, where school children’s only desire is to become members of crime organisations, in order to make good money. If we don’t take measures against crime now, fifty percent of the next generation will be killers, while the other half will have left the country.”

The Bishop of Apatzingan, Monsignor Miguel Patiño Velázquez, was the first to denounce narco-traffickers. At least a dozen other priests, including Father Goyo, are now at threat from criminal organisations in the State of Michoacan. The Archbishop of Morelia, Cardinal Alberto Suárez Inda, urged his priests to be extremely cautious and to wear bulletproof vests. The Federal Police have delivered about thirty bulletproof vests to the Archdiocese of Morelia, and to several priests in the Dioceses of Apatzingan, Tacámbaro and Zamora. “We have been intimidated and threatened by organised crime since we have started to denounce violence, and above all since we have started to give the names of criminals to the authorities”, says Father Goyo. He was among those who openly accused Servando Gomez Martinez, head of the Knights Templar, of being the main person responsible for the murders and disappearances of several people in the Tierra Caliente.

Last October, Bishop Arturo Lona Reyes, Archbishop Emeritus of Tehuantepec in the State of Oaxaca, received a death threat by phone. Monsignor Lona Reyes is very well-known in Mexico for his longstanding defence of the rights of indigenous peoples. The Bishop has already suffered eleven attacks. Local authorities have taken measures to protect the brave Bishop, who condemned the disappearance of 43 students. Drug dealers may hesitate to take a definitive step, because killing the beloved bishop would be an unpopular decision. The Archbishop is not scared and continues his fight against violence and crime: “I belong to the indigenous. It takes more than a threat to make me change my mind”.

According to the Mexican Episcopal Conference, of the thirty-nine religious members who have been killed over the past 24 years, thirty-six were openly murdered, and the remaining three have disappeared. In addition, four lay people, including a journalist working for a Catholic newspaper, have also been killed.

The last priest to be killed was Father Ascensiόn Acuna Osorio, who was murdered in September 2014. His body was found floating on the river Balsas, and it showed signs of torture. He was only 37, and he served in the Diocese of Ciudad Altamirano, one of Mexico’s most violent areas. The lifeless body of Don Gregorio Lopez Grosotieta, 39, who had disappeared on the evening of December 21, 2013, was found on Christmas Day in the town of Colonia Juárez, in the Diocese of Ciudad Altamirano. The priest, who was a professor at the Major Seminary ‘Anunciacion’, died of asphyxiation a few hours after the kidnapping. According to witnesses, he was kidnapped from the Seminary and forced into a car.

In November 2013, two priests were murdered in the State of Veracruz: Father Hipolito Villalobos, 45, and Father Nicolas de la Cruz Martinez. The local church accuses the Jalisco New Generation and the Los Zetas cartels of being responsible for the two murders. In February 2013, Father José Flores, member of the Cristo Rey parish in the State of Colima, was beaten to death.

The remains of a Ugandan Comboni Missionary, Father John Seenyondo, 62, were found in a mass grave on 29 October 2014, while the police were searching for the bodies of 43 missing students in Iguala. Father Seenyondo had arrived six years earlier in Guerrero, after serving in Tlacotepec. Afterwards he was assigned to serve in the Church of Nejapa, in the municipality of Chilapa. He had received permission to join the local clergy in the Diocese of Chilpancingo-Chilapa a few weeks before his death.

PreviousPhilippines: Cardinal Tagle Calls for 10 Pesos a Day to Save 25,000 Children from Hunger
NextUN Experts Uncover Attempt to Smuggle Congo Arms via Rwanda to Burundi Rebels