Pope Francis Visits Mexico “To Promote the Process of Rehabilitation” 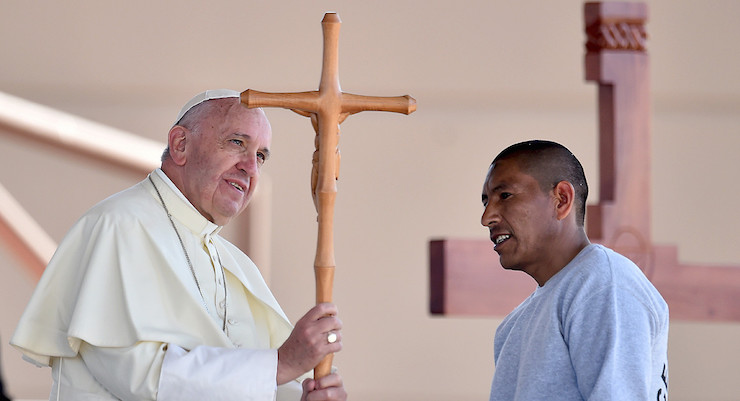 During his visit to Mexico, Pope Francis met prisoners in Ciudad Juarez – an occasion which was particularly important to him. To mark the visit, he said: “The problem of security is not resolved only by incarcerating; rather, it calls us to intervene by confronting the structural and cultural causes of insecurity that impact the entire social framework”.

Upon his arrival in Ciudad Juarez, in the state of Chihuahua, Francis visited the “Centro de Readaptacion Social estatal no. 3”, where approximately 3,000 inmates are currently serving their sentences.

The inmates’ families were assembled to greet the Pope. When the Pope approached a woman standing behind the barrier, she blessed him, making the sign of the cross on his forehead and heart as one usually does with children. Francis embraced her and reciprocated with his own blessing.

Another female inmate welcomed the Pope on behalf of her fellow inmates, saying: “Our faith and inner strength are sorely tested here. By sharing this space we are all equal, just as we are all equal in the eyes of God. Your presence is a reminder to all those who have lost hope in our rehabilitation and to those who have forgotten that there are human beings here.” “When we are sentenced,” she continued, “what we do is cry. We feel distressed, we despair. And we start asking ourselves questions we do not want to know the answer to: when will I get out? Does my family love me? Have they forgotten about me? We feel exposed, vulnerable and alone.”

The focus of Francis’ speech was primarily mercy in the Jubilee Year, but also a “social reintegration” that begins outside the Church: “The one who has suffered the greatest pain, and we could say ‘has experienced hell’, can become a prophet in society. Work so that this society which uses people and discards them will not go on claiming victims.”

Francis reminded those present that “there is no place beyond the reach of this mercy, no space or person it cannot touch. Celebrating the Jubilee of Mercy with you is recalling the pressing journey that we must undertake in order to break the cycle of violence and crime.”

Francis criticised the current system: “We have already lost many decades thinking and believing that everything will be resolved by isolating, separating, incarcerating, and ridding ourselves of problems, believing that these policies really solve problems. We have forgotten to focus on what must truly be our concern: people’s lives; their lives, those of their families, and those who have suffered because of this cycle of violence.”

This is why prisons are “a symptom of a culture that has stopped supporting life, of a society that has abandoned its children”.

Reintegration, Francis said, “begins before, it begins ‘outside’, in the streets of the city. Reintegration or rehabilitation begins by creating a system which we could call social health, that is, a society which seeks not to cause sickness, polluting relationships in neighbourhoods, schools, town squares, the streets, homes and in the whole of the social spectrum. A system of social health that endeavours to promote a culture which acts and seeks to prevent those situations and pathways that end in damaging and impairing the social fabric.”

Yet sometimes it seems “that prisons are intended more to prevent people from committing crimes than to promote the process of rehabilitation that allows us to address the social, psychological and family problems which lead a person to act in a certain way. The problem of security is not resolved only by incarcerating; rather, it calls us to intervene by confronting the structural and cultural causes of insecurity that impact the entire social framework.”

“Social reintegration,” the Pope explained, “begins by making sure that all of our children go to school and that their families obtain dignified work by creating public spaces for leisure and recreation, and by fostering civic participation, health services and access to basic services”.

“We know that we cannot turn back; we know that what is done, is done,” Francis concluded. “This is the way I wanted to celebrate with you the Jubilee of Mercy, because it does not exclude the possibility of writing a new story and moving forward. You suffer the pain of a failure, you feel the remorse of your actions and in many cases, with great limitations, you seek to remake your lives in the midst of solitude.”

“You have known the power of sorrow and sin, and have not forgotten that within your reach is the power of the resurrection,” Francis encouraged the inmates by saying. “The power of divine mercy which makes all things new. Now, this mercy can reach you in the hardest and most difficult of places, but such occasions can also perhaps bring truly positive results. From inside this prison, you must work hard to change the situations, which create the most exclusion. Speak with your loved ones, tell them of your experiences, help them to put an end to this cycle of violence and exclusion. The one who has suffered the greatest pain, and we could say ‘has experienced hell’, can become a prophet in society. Work so that this society which uses people and discards them will not go on claiming victims.”

Francis also urged staff at the prison, directors, prison guards, and all who work there: “Never forget that all of you can be signs of the heart of the Father. We need one another to keep on moving forward.”

Before the final blessing, he said to inmates: “May this prayer open up your hearts and allow you to forgive society, unable as it was to help you, often driving you to make mistakes.”

PreviousPope Francis: “Young people are the Hope and the Treasure of Mexico”
NextEgypt: Grand Imam of Al-Azhar Invited to Meet Pope Francis