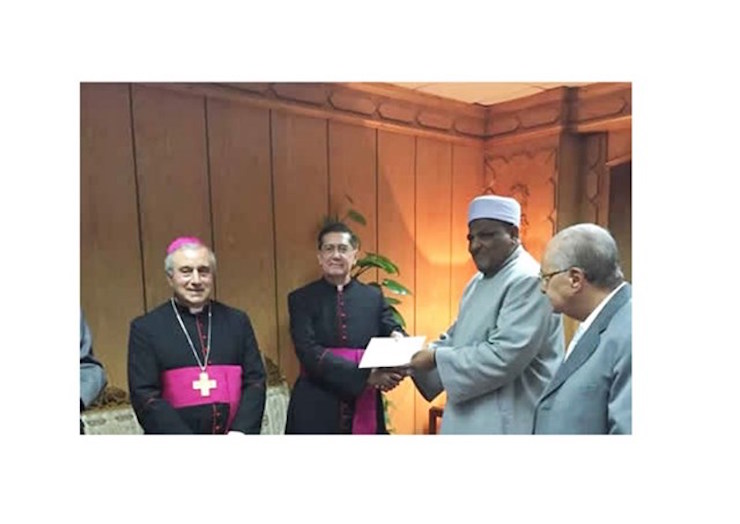 A Holy See delegation has visited Al-Azhar University, the prestigious Sunni Islam centre of learning in Cairo, after a number years of strained relationships between the University and the Vatican. The delegation also extended an invitation to the University’s Grand Imam to meet with the Pope.

Sheikh Ahmed al Tayyeb, Grand Imam of al-Azhar University, has been invited to visit the Vatican to officially sanction the resumption of bilateral dialogue between the Holy See and the most authoritative religious and academic institution of Sunni Islam. The invitation was delivered in person by Comboni Father Miguel Angel Ayuso Guixot, Secretary of the Pontifical Council for Interreligious Dialogue.

According to the statement released by the Islamic institution, “Al-Azhar and the Holy See have agreed on the need to hold a joint meeting to exit the phase of suspension of the bilateral dialogue”.

In the meeting with the leaders of al-Azhar, Father Ayuso Guixot confirmed the full willingness of the Holy See to receive a delegation of the academic and religious Sunni institution in Rome, with the aim of relaunching dialogue at the service of peace.

“We have come to Cairo,” said Father Ayuso Guixot, “to express the desire to resume friendly relations of co-operation, that on our behalf have never stopped, and to recall the importance of our co-operation for the common good of the entire human family.

“We also brought an invitation for the Grand Imam to come to Rome to meet Cardinal Jean Louis Tauran, President of the Pontifical Council for interreligious dialogue – who will then accompany the Grand Imam to the official audience with Pope Francis. Without precipitation, we hope that this will happen soon.”

In the view of the Secretary of the Vatican Dicastery responsible for dialogue with other religions, the resumption of active collaboration between the Holy See and al-Azhar is also important in light of the current international geopolitical climate, which is marked by conflicts causing suffering to entire populations.

Father Ayuso Guixot said: “The resumption of relations is certainly good news, that in the current situation will help guide our steps along the paths of justice and peace for a better world. Religious leaders, with their collaboration, want to give an important contribution: in the moment of darkness that we are experiencing, it is important that there are converging forces, intentions and even actions in favour of the wounded humanity, which greatly needs to be healed. Many people of good will are already giving their contribution to spread this balm, which we all need”.

Father Ayuso Guixot said the meeting with the leaders of al-Azhar was friendly, and that the resumption of co-operation is “a shared desire by Pope Francis and Grand Imam al Tayyeb”. In the official statement, the leaders of the University of al-Azhar declared their constant readiness to work at the service of anything that promotes “stability and peace“. They also note how the changing global situation, marked for example by the phenomenon of terrorism justifying itself on religious grounds, requires bilateral dialogue.

Al-Azhar University decided to suspend talks with the Holy See in January 2011, after Pope Benedict XVI mentioned an attack against Alexandria’s Copts as one of the reasons why there was an “urgent need for the governments of the region to adopt, in spite of difficulties and dangers, effective measures for the protection of religious minorities”. Cairo interpreted these words as political meddling, with the Egyptian government at the time going as far as recalling its ambassador to the Holy See. In turn, the Sunni Al-Azhar University announced it was freezing its dialogue with the Holy See, also citing Pope Benedict XVI’s Regensburg lecture.