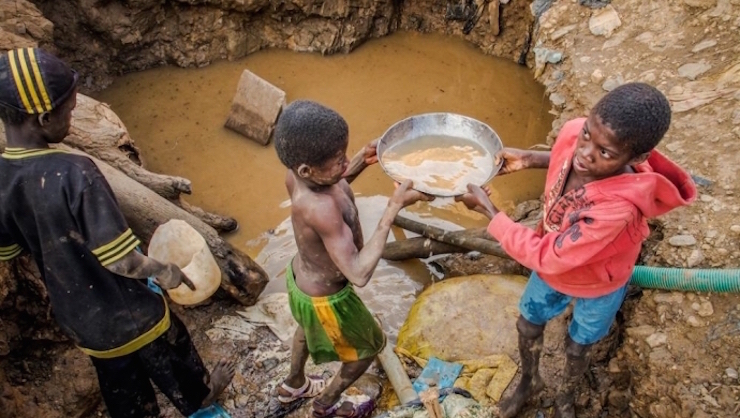 A recent Human Rights Watch report has denounced the exploitation of thousands of children working in Tanzanian gold mines. The report focuses on the Geita, Shinyanga and Mbeya provinces, not far from the Lake Victoria region and close to the Zambian and Malawi borders.

The sun has not yet risen when Haji and Mosi, aged fourteen and twelve respectively, leave home to go to the mine. On their way they meet Juma, who is also twelve. They joke and talk about how they will buy their favourite football player’s shirt with their week’s wages.

In a few minutes, they will plunge down into the bowels of the earth to spend hours digging in the mine tunnels, deprived of light and air. They will have to carry heavy bags through the tunnels: exhausting and unsuitable work for their age, posing a serious risk to their health.

Teenagers and children as young as eight are victims of child labour in the mines of Tanzania. Human Rights Watch visited 11 mining sites in advance of producing the report, interviewing more than 200 workers. According to the report, “Thousands of children work in small-scale gold mines, most of which are unlicensed. The employment of children in dangerous mining work is one of the worst forms of child labor under international agreements, to which Tanzania is a party.”

Mercury is the primary risk factor. Child labourers, as well as children living close to mining sites, are at serious risk of mercury poisoning. Entire villages are affected. Mr. Haji Rehani, an expert on mercury from the Tanzanian NGO Agenda for Environmental and Responsible Development, said: “Breathing in dust and exposure to mercury causes serious health damage. Mercury attacks the central nervous system and can cause lifelong disability to children, whose developing bodies are more easily affected by the heavy metal.” Mercury is mainly used in small-scale mines, where the gold-bearing dust concentration is lower and cyanide is not used in the process.

Local government officials in Tanzania’s largest city, Dar el Salaam, could not ignore the Human Rights Watch report, confirming after a few days that there are more than 800,000 gold miners in the country – thousands of whom are children. At the same time, the government also admitted that the implementation of existing laws for safe mining practices, which prohibit child labour in mining, has failed due to the limited enforcement budget. Mr. Mkama Nyamwesa, Principal Officer for Employment and Youth Development at the Ministry of Labour, said that there are currently only 81 labour inspectors nationally – a number far too small to cover all the mines scattered across the country. Human Rights Watch commented that, “On paper, Tanzania has strong laws prohibiting child labor in mining, but the government has done far too little to enforce them”.

At the heart of the problem are a number of economic and social factors. Rehani explains: “In Tanzania, it is a daunting task for parents to feed their families and send their children to school, while, at least in theory, working in mines offers a chance of immediate earnings”. According to Father Marco Turra, a Consolata Missionary who knows Tanzania well, it is typically orphaned children whose parents have died of AIDS or children of poor families that fall victim to child labour in the mines.

Human rights and economic processes are rarely compatible. Gold exports are the main source of foreign currency in Tanzania, the fourth largest gold producer in Africa. In the first six months of 2013, gold exports brought in more than $1.8 billion for the country. Experts estimate that about 10 percent of the country’s gold comes from small-scale mining – a number which continues to increase as a consequence of rising gold prices and limited alternative sources of income. Children’s’ rights violations linked to poverty and limited job opportunities is not just a Tanzanian problem; it is also a sad reality in other countries.

According to the United Nations Program for the Environment (UNEP), about 15 percent of the world’s gold production comes from quarries or mines where labourers, miners or farmers work without any authorisation, and with serious risks to their health. For this “dirty” work which produces around 400 tonnes of gold per year, around 100,000 to 250,000 children are employed in the gold mines of Africa, according to UNEP data. The top destination for gold from Tanzanian small-scale mines is the United Arab Emirates (UAE), Switzerland, South Africa, China, and the United Kingdom.