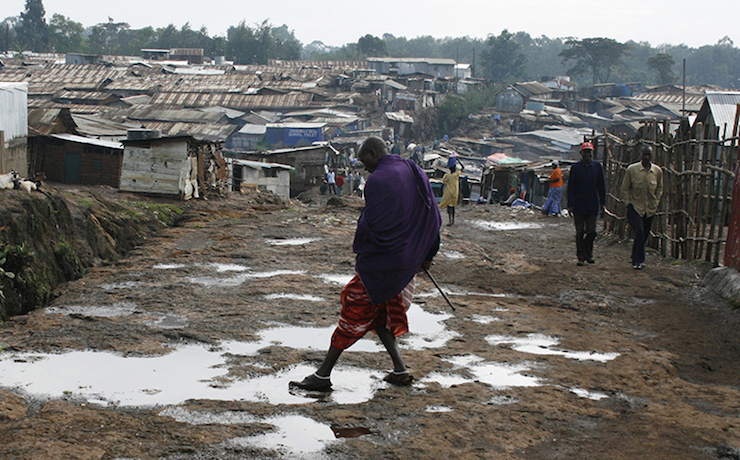 Kibera is one of the largest slums on the outskirts of Nairobi, Kenya. A small missionary community has been living there for almost twenty-one years. They have created the ‘Bank of Trust’, which is not an official lending institution but an association of small savers.

A man stands by a big pile of rubbish. He wears ragged clothes, but he’s reading a newspaper. He found the crumpled sheets among plastic bottles and stinking food leftovers. He reads as if he does not notice the destitute scavenging through the rubbish taking place around him. The man is an intellectual; but he lives in Kibera, which is said to be the largest slum in Africa: an ocean of shacks interrupted by gutters and increasingly narrow alleys. A maze, a few kilometers from downtown Nairobi, which grows day after day like an octopus, eating everything its tentacles can reach. Nobody knows exactly how many people live here: estimates range from 200,000 to one million. Few manage to leave this place, and many more join this desolation every day. Before moving into one of the shacks of Kibera, they had dreamt about a better future: now they have fallen prey to local landlords, who demand rent for the barely inhabitable huts. They end up spending years in dirt and misery; and their only wish is to return home to rural Kenya, a green and boundless landscape, where the horizon is the only limit and people own their land.

Such is the plight of Monicah Awinos. The dirt road leading to her shack passes by the dumping site, where the newspaper reader stands. Monicah wears rubber sandals, but she is proud. She just received a €50 micro-credit loan from the “Bank of Trust”, and she has been able to return what she borrowed previously. Monica, who is 39, sells tomatoes, potatoes, charcoal, and chips that she fries herself. Every morning at 5.30am she goes to the market to open her shop and waits for customers. “My husband came here to find a job, but at home life was cheaper; here we must pay for everything”. Monicah speaks softly and, from time to time, with an embarrassed smile. She feels uncomfortable because of her poverty, because of that worn-out sofa in the house which she shares with her four children. Their only belongings are inside some plastic bags hanging from the wall. On a good day, Monicah can earn about 200 shillings (€2). Her husband does not work on a regular basis, but together they manage to survive. The rent of their hut costs 1,500 shillings (€15) a month.

Douglas Yungo is also part of the “Bank of Trust”. He speaks good English and calls his shop a grocery store. He also sells something which is precious in Kibera: water. In the slum, water pipes and sewers only exist for the public toilets. Water for any other purpose must be bought. Douglas also offers the possibility of taking a shower behind his shack, for six shillings.

Father Jairo Alberto Franco, a Yarumal missionary involved in the bank, says: “Our purpose, when we created the ‘Bank of Trust’, was to encourage people and push them towards economic independence”. Father Jairo’s congregation bears the name of the Colombian mountain town where it was founded in 1927. They have been living in three small houses in the slum of Kibera for 21 years. The missionaries share small rooms, a common kitchen, and some showers. A yard with a long bench leaning against the wall is their dining room.

Father Jairo says, “Kibera is also the best school for our seminarians. We are in close contact with the poorest and we can serve them at our best”. In Kibera, one can have a first-hand experience of what being a missionary means. One of the young seminarians is Pascale Ochieng, who visits the sick regularly as part of his tasks. Other seminarians are active in the “Bank of Trust”, in small Christian communities, or in promoting inter-religious dialogue. “Living with these people means giving them back their dignity”, Pascale says. “If you are available for someone, you put yourself at their level, and that’s the only way to understand their problems”.

“No dump”, someone has written on a wall – in a desperate attempt to restore some order to this chaos, where the train to Mombasa clatters along the tracks and everyone seems to be in perpetual motion. Or rather, everybody but one: the newspaper reader, now leaning against a wall with a newly found treasure he is about to read.

PreviousUganda: Something Ends, Something New Begins
NextKenya: The Maasai’s Concept of God