Kenya: The Maasai’s Concept of God 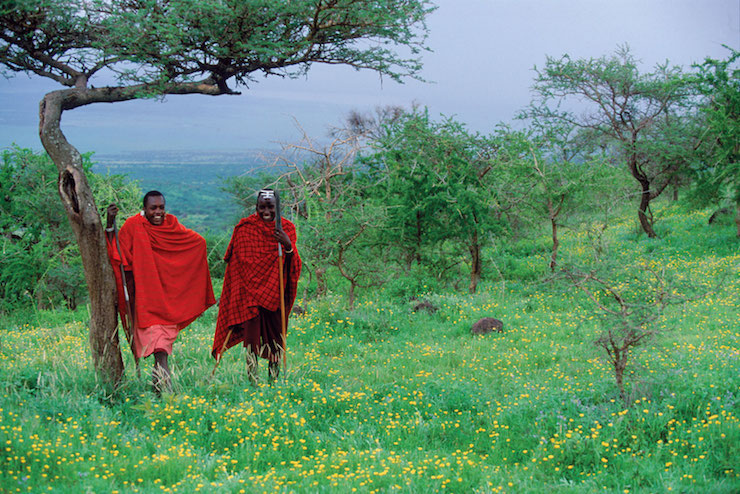 God is always present in the lives of the Maasai, a deeply religious people.

Not far from the border between Kenya and Tanzania, there is a mountain the Maasai call Oldoinyo le Enkai, “God’s mountain”. It is located halfway between the white mountain, Kilimanjaro, and the black mountain, Meru. The Oldoinyo le Enkai mountain is considered a gift from God, and the Maasai worship in its shadows, praying for their cattle and children. Enkai, their God, lives both in heaven and on earth. To the Maasai, thunder and lightning are nothing but the presence and power of Enkai, who lives atop the mountain that they bring their sacrificial lambs to. The synergy that the Maasai experience with nature as they harvest the land is strongly connected to their faith in God.

Enkai is the supreme God, and no one else can be called by his name. He goes by two faces: Enkai Narok, the black face, good and benevolent; and Enkai Na-nyokie, red and vengeful, the face that shows God’s wrath. The black face shows itself when it rains and thunders, making the grass grow that will feed the livestock and bring prosperity to the people. The red face manifests itself through violent storms that kill and injure, and in periods of devastating drought that bring about hunger and death.

Enkai is also called Oloikurrukur, “my thundering one”, or Magilani, “powerful knowing one”, or Olaidimani, “one who is able”. He is also called Patulusoo, “one who surpasses”; or Natii ilakir, “where there are stars”. His power is expressed in his purpose of originating, or bringing to life. He is Enopeny, “the Master”. Enkai is believed to dwell in the sky, as a popular prayer explains: “My god, you are surrounded by stars with the moon at your navel; you last forever.” Enkai is also called Nalakua nataana, “far one and near one”; or oldapaash, “wide one” – expressing the eternity of his being. He exists from horizon to horizon. Enkai is believed to be both transcendent and immanent, far and near, according to the Maasai.

The Maasai people hold that God dominates both life and death. There are prayer rituals during major ceremonies, but their daily life also allows for frequent expressions of reverence and gratitude to the divinity. These include prayers such as Enkai, tajapaki tooinaipuko inono (“God, protect me with your wings”), or Enkai ake naiyolo (“Only God knows”). A Maasai who believes he has been betrayed by destiny or by an unkind person will say: Tapala amo etii ake Enkai (“It doesn’t matter, because God is always present”). Some of the Maasai refer to God as a man, while some refer to God as a woman: where one prayer says Naamoni aiyai (“She, to whom I pray”), another says Olasera ingumok (“He shines a thousand colours”).

The Maasai often invoke God, and they offer him sacrifices and say his name with great respect. There are no celebrations in which God’s name isn’t mentioned, and food and drink are always offered during such gatherings. God is always present in their lives, for the Maasai are indeed a deeply religious people.

PreviousKenya: Giving Back Dignity
NextSantiago Atitlán, Guatemala: The Land of the Corn Flower