Santiago Atitlán, Guatemala: The Land of the Corn Flower 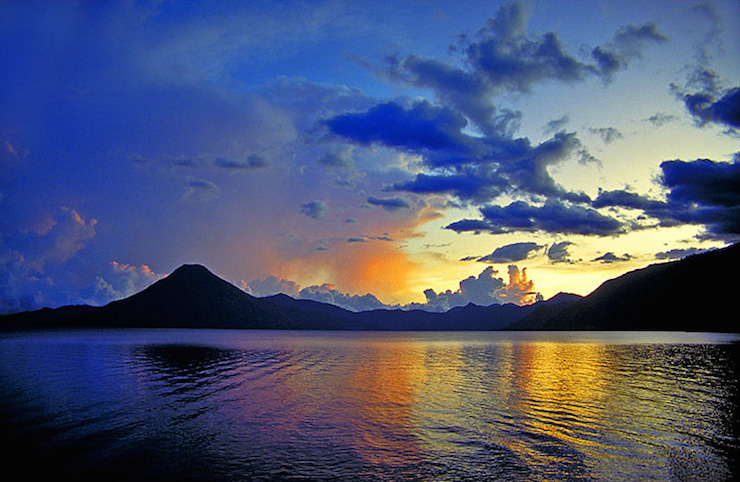 Santiago Atitlán, which has a population of about 50,000, is located on the south shore of Lake Atitlán in Guatemala’s central highland region, approximately 100 miles to the west of the country’ capital, Guatemala City.

Santiago Atitlán amazes its visitors with its cultural richness. This municipality in the Department of Sololà is home to the Tzutujil, one of the smallest ethnic groups in Mayan culture. Tzutujil means “the people that come from the corn flower”. The book Historia y Memorias (“History and Memories”) expands on the origins of this group, which settled down on the shores of Lake Atitlán around 1250.

At first sight, the beauty of the lake, the volcanoes, the church, the plaza, the park and the market captures visitors; but if they take a closer look, they find out that there is much more to see in this place, located 1,742 yards above sea level. People of many different political and religious beliefs show respect for Maximón, a local deity. The statue of the deity, short and draped in colourful scarves, is made of wooden sticks tied together, and its mask is carved from the same wood. The Brotherhood of the Holy Cross, the principal indigenous authority in Santiago Atitlán, organises several celebrations in honour of Maximón. According to myth, he has two wives, changes houses every year, likes drinking and smoking, collects ties, and uses perfume. During Holy Week, his wooden idol is taken from his shrine and paraded through the town square, where people beat him with sticks. Many ask him for favours and advice for the year ahead.

The current name of the town, Santiago Atitlán, relates to the Saint James the Apostle Parish, which was founded by the Franciscan friars who evangelised the region. The town’s present church was built in 1547; it is one of the oldest in Central America. Hundreds of people go there to pray or to attend Catholic ceremonies. On special Catholic occasions, mass is celebrated in the square in front of the church, while ordinary rites are attended inside. The natives have asked that their priests speak both Spanish and Tz’utujil, the language inherited from their wise Mayan ancestors.

The century-old bell of this church can still be found in the bell tower. It is said that during the December 1990 uprising, people went to the church and rang the bell, in order to wake up the rest of the town to fight against the army. There is also a “Peace Park” inside the chapel, erected in memory of the martyrs of the 1990 Civil War – in which 250,000 people were killed, and 45,000 are considered desaparecidos, “disappeared”.

However, not all memories in Santiago Atitlán are sad. Miguel Sisay, who was born in the town, recalls that when he was a child, adults used to tell him the story of the “Rain Maker”: a legendary character who appears in the collective imaginary as a white bearded man, carrying a water flask. According to legend, he kept drinking the water but it never ended; and so he had the power to make it rain. Another legend is about Lake Atitlán’s spirit, who is said to wander the narrow streets of this town at night.

In the magical, ancient scenery of Santiago Atitlán, children weave fabrics and make regional dresses; they paint, sing, and sculpt, while families make their living through trade, tourism, agriculture, and fishing.