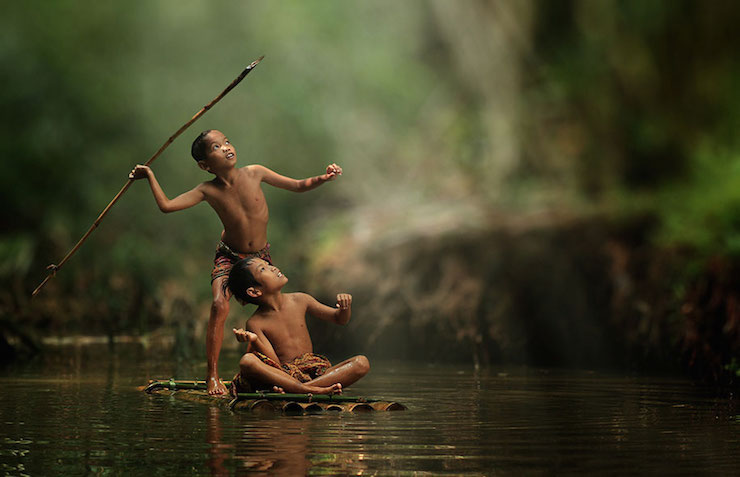 The island of Sumba is part of the southern archipelago of the Lesser Sumba Islands in Indonesia. A small Christian community lives there, practicing the Gospel through their understanding of and respect for various traditions.

The “PusPas” Pastoral Centre, which is located in the small village of Katiku Loku, was established in 1980 after the Government announced that all foreigners including missionaries would have to leave the country. “Luckily, that provision was never put in place,” says Sister Mathilde Franke, of the Missionary Sisters of the Precious Blood, who coordinates the activities of the Centre. In a predominantly Muslim country, this Christian enclave is continuing its work of evangelisation, and Sister Mathilde says they have never had problems with the members of other religions.

But she is critical of the central Government: “In Jakarta, they seem to have forgotten Sumba, where in several areas, people still have no access to water – where the infant mortality rate is one of the highest in the world; where schools and teaching resources are inadequate; and where job opportunities are practically nil. In addition, the population experiences cyclical periods of malnutrition due to poor harvests. The limestone soil does not retain water and the forest, which was aggressively exploited during the colonial period, is only a memory by now. The vegetation of the island consists only of vast grassy areas and savannah”.

During their lunch breaks, the people of Sumba rest in the dormitories of the PusPas Centre to escape the oppressive heat. Lukas Pati Maramba Awang is not tired; he is sitting in the shade of a tree. A few other people are assembled around him. “Christianity is love,” he says, raising his hands and looking up to the sky. “We don’t have to do anything to get that love, because it exists simply for us.”

Lukas is very good at grabbing his audience’s attention, and if one listens to him, one cannot but notice that biblical stories are rarely so charmingly illustrated. Lukas explains the parable of the wheat and the weeds to the people who are gathered in the garden of the “PusPas” Pastoral Centre: “There is a specific time for everything. It is not up to any of us, but to Jesus only, to decide what is wheat and what is weed.”

Lukas is a farmer and a fervent Catechist. He has eleven children and several grandchildren. Like most of the inhabitants of Sumba, he was first introduced to Marapu, the local religion. After attending a formation programme, he was appointed Catechist. Every day he reaches the most remote places of the island, travelling on horseback. One day he invites us to accompany him.

After several hours of riding, we reach Waimanu. We are welcomed by the village chief, who wears a red t-shirt over his traditional sarong. He explains to us that Waimanu is a village consisting of six houses with typical bamboo terraces, the bale bale, where the inhabitants spend most of their time. Some buffalo horns hang on the wall of a house: symbols of a high social rank. In Sumba, horse and buffalo ownership, not money, determines wealth and social status. The houses in Sumba aren’t just intended for inhabitation; they are also places where ceremonies and social gatherings are held. Every family owns a three-storey house. The animal stables are located on the ground floor, people live on the first floor, and ancestors are believed to inhabit the last floor, which is covered with leaves. Access to the roof is prohibited.

The houses of Waimanu are built around an open space, which hosts an altar for sacrifices and the graves of the dead. The writing carved into the surface of some steles tells the history of the place. There is also an equestrian statue in the square, representing the former village chief and his wife. The symbols of a crocodile and a turtle show that the chief was a severe but also an understanding man. We note some stains of dried blood on the altar, and an old woman explains to us: “Yesterday a wedding ceremony was celebrated, and we sacrificed a buffalo”. Lukas adds: “We feel compelled to organise big celebrations, even though we can no longer afford them. The dowry, which once consisted of a spear, a knife, animals, and jewelry, is today reduced to only a few animals. But nobody dares to interrupt this tradition, because they fear Marapu’s anger”.

The Sumbanese believe in temporary life in the world, and eternal life in the Doomsday, the world of spirits in Marapu heaven, Prai Marapu. The word Marapu refers to, firstly, the occupants of the eternal heaven, who lead a similar existence to men. They live in couples, and one of these couples is the ancestor of the Sumbanese. Secondly, it refers to the spirits of Sumbanese ancestors in Prai Marapu. Thirdly, it refers to the spirits of their relatives. And fourthly, it refers to all spirits dwelling in the universe. Marapu has a mysterious and magical authority over human life.

In the evening, we return to the PusPas Pastoral Center. Some people are still talking and exchanging opinions about what Lukas had told them during the day. Many of them, the next day, will return to their villages and tell the others about the lesson from the Gospel they learned.

PreviousSantiago Atitlán, Guatemala: The Land of the Corn Flower
NextNigerian Archbishop Kaigama: “In our country, corruption is a social disease”