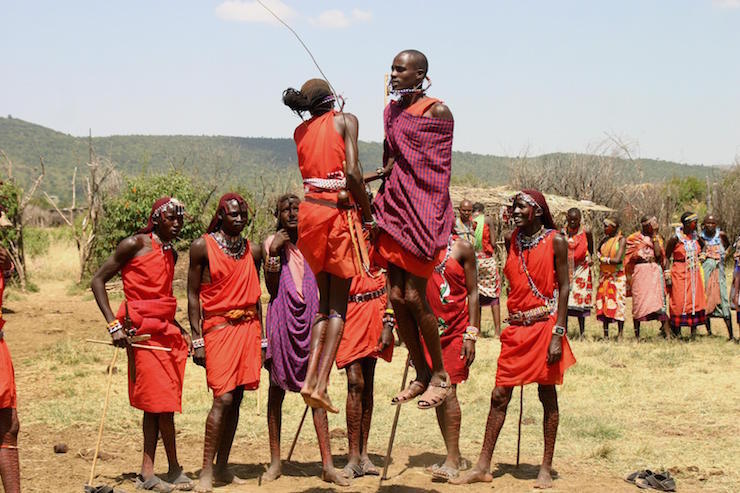 The Kenyan ritual of tying grass represents a close union with God and with other people. In the life of the Maasai people, it plays a significant role in various rituals and blessings.

Grass is of prime importance in the life of the Maasai. The extent of their reverence for grass is demonstrated by the fact that in the days of Maasai raids on other tribes, they would spare the life of anyone who held up a tuft of grass: for this was a sign of peace and surrender. Small wonder, then, that the tying of grass plays a significant role in various Maasai rituals and blessings.

Rituals often provide some explanation for the beliefs of a tribe, which would otherwise remain inexplicable.

Fundamentally, the act of tying signifies a close union – a togetherness of the individual with themselves, with others, and with Enkai (God). This symbolism is the basis of the various rituals in which tying is used. For example, when a man’s cows or sheep have strayed, he “ties” them symbolically by tying knots on a string or a blade of grass, while saying appropriate invocations to Enkai; or by calling down a curse on anyone who may try to steal the lost animals. This symbolic tying of the animals is believed to prevent them from wandering farther until the owner finds them. A man may also “tie” a person whom he considers his enemy, or he may “tie” them out of envy. This is done by using various charms, and by tying knots on a girdle or on a string. In such maledictive rituals, seven knots or seven charms are normally used – because that number is considered unlucky.

Grass, strings, pebbles, and the fruit of the en-tulelei plant are all considered symbolically appropriate for use in rituals; but it is the words accompanying the act of tying that are considered most effective and therefore most important for the overarching symbolism. Ritual effectiveness depends on the importance of the person performing the ritual: the more important the person, the greater the effect of their words. This is why only an older person can bless a younger one.

The ritual of tying grass is most meaningful at Eneeni Inkujit: a place in the Loita Highlands overlooking the great Loita Plains.

The Loita Plateau is situated about 2,700 yards above sea level, marked by peaks that seem to pierce the clouds. As one approaches this land, one experiences a feeling of remoteness, mystery, and aloofness – typical in those sacred places far removed from human habitations, which give one a sense of God’s presence. In the Loita Highlands, this sense of mysteriousness is perhaps further accentuated by the fact that this is the land of the Ilkidongi clan – the diviners. As one emerges into these immense, smooth rolling plains, one comes almost unexpectedly upon Eneeni Inkujit, which has been described as “a grove which seems to belong to another world”, perhaps because of its unexpectedness in such a place.

Growing at the centre of the sacred place, surrounded by a number of different trees and shrubs is the Oreteti, a giant fig-tree which is regarded as sacred by the Maasai, and under which various rituals and sacrifices – particularly those dealing with fertility and nourishment – have always been carried out. The Maasai in Tanzania deliberately plant this sacred tree on their land, thus providing every family with a place to hold rituals in.

Whenever Maasai pass Eneeni Inkujit, they stop to pray to Enkai for peace and for his protection during their journey to or from their olosho (clan). They pray, then knot a tuft of grass, undo the knot, pray again, and then remake the knot. While they tie the grass, they say a prayer: “O God, tie my heart, do not let it fall”. Sometimes the elders pray for the whole olosho: “God, tie me to my olosho and do not let it fall”. Finally, another prayer said at Eneeni Inkujit concerns peace: “O God, let us go in peace and return us in peace. O God, give us health, O God, give us peace. O God, give us heads which are wet [because of rain], and give us good care for our children and fertile young mothers. O God, grant to do everything well to us. O God, make sweet for us the grass so that the cattle may love it. O God, make sweet for us the water so that cattle and people may love it”.