Togo: The Beginning of Life 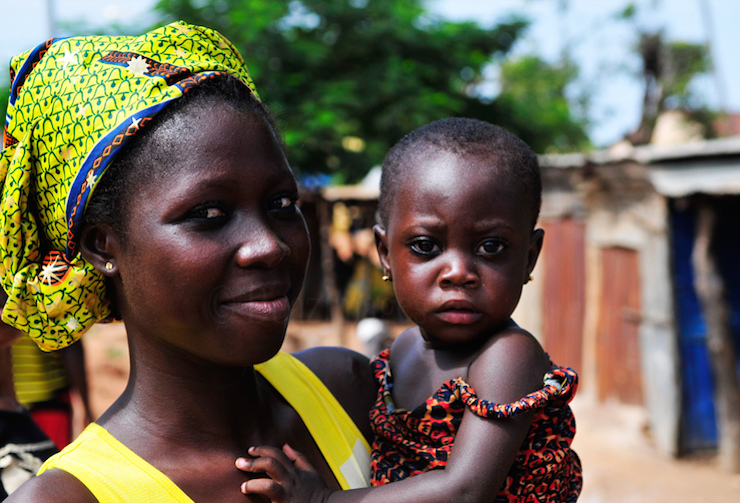 For the people in the south of Togo, the birth of a child signifies the return of an ancestor; and there are diverse rites that accompany the inclusion of the newborn into the cosmos and society.

In many African countries, including Togo, birth is not an ordinary or indifferent event. This is because every birth is the affirmation of life over death. Birth is the return of an ancestor to manifest life (agbetome) – with all that this involves.

During pregnancy, the mother-to-be must avoid eating eggs, because eggs contain life and eating them would mean offending life itself. She must also avoid eating crabs or monkeys, otherwise the child would walk like them; and she must avoid looking at chameleons to avoid losing her child. To stare at a chameleon would be like provoking the one who was present at the beginning of the world and followed the first steps of man on earth. The mother must, therefore, avoid disturbing or frightening the chameleon; it is always better to change direction to avoid meeting it.

It is said that, before becoming flesh in the womb of the mother, children live in a mythical bome or world of possibilities. They are then sent into the world of manifest life – the circle of life, agbetome. Before being sent into the world, the future child receives the se or soul of the destiny that will be made known to the seer by means of the geomantic sign of the kpoli. The foetus-to-be also receives the dzo or soul of the clan passed down by the ancestors, which will closely bind the future child to the destiny of the ancestor. The new living being must, in some way, repeat the journey of life of the ancestor who sent it into the world.

At this point, the foetus is sent into the maternal womb, where it will receive the kla (the individual soul), the gbogbo (the breath of life), the nutila or material body, and the se xoto (the soul of the father) and se xono (the soul of the mother) – the destiny transmitted by both parents.

From the bome, Mawu (the supreme divinity) sends individuals into the world in pairs of two: a man and a woman who afterwards must one day meet on earth to form a family. The woman who meets her husband chosen by destiny is called sessi: wife of destiny.

At birth, the newborn is not automatically accepted and included in society, but must submit to rites of acceptance and insertion into the agbetome, or circle of life. The first ritual of inclusion is that which places it into cosmic time. The newborn then receives a name, based on the day of the week and its gender. Names are always linked to circumstances or events that happened on the day of the birth. The name is conferred by the newborn’s maternal aunts, with the consent of the father.

The most important moment for the family is when the newborn is inserted into the clan and into society. This is the day the child is officially born, by means of the rites of videto and dzoto. The videto ritual begins with a period of seclusion and separation of the mother – a period that lasts seven days for a girl and nine days for a boy. The mother has to stay inside the house and can’t appear in public, because the newborn has no right to enter into contact with the real world – it is not yet anybody’s child. On the eighth day, the paternal aunts bring a basin with some cloth, clothes belonging to the father, a hairbrush, some ointment, and a lantern. The oldest aunt opens the door, goes into the room, takes the child, and starts to leave the room. At the same moment, another aunt throws some water on the roof of the hut. As the drops fall on the ground, the aunt with the newborn holds the child in such a way that some drops fall on its head. This short rite is repeated seven times.

The oldest aunt then utters invocations to the voodoo of the clan, and to the ancestor, wishing the child welcome, peace, health and long life. Then the name chosen for the child is loudly proclaimed; a name that is tied to the very existence and the destiny of the child. The newborn is dressed in new clothes and placed on a mat: people are allowed to touch it, caress it and hold it in their arms. Gifts are also placed close by. A common meal concludes the rite.

Dzoto or amedzodzo is the second rite meant to insert the newborn, firmly and with full rites, into the real world. This involves revealing the newborn to the ancestor who sent the child and passed on to it the power of his clan, the dzo. The ritual involves the seer of the clan, who will determine the ancestor from as far back as four generations. The mother of the newborn will hold some objects which represent those ancestors in her hands. Once the ancestor is recognised, the seer will instruct others to either fix a rod of iron (se agbata) in the ground as a small altar, or to roughly carve a small statue of the ancestor and place it next to the door of the dwelling.

If the ancestor is represented only by a wooden statue, the ritual takes place in the courtyard in front of the house of the mother. A very deep hole is dug, into which a leaf of the iroko tree is placed after three drinks have been poured: dzatsi (water with some flour), liha (an acidic liquor of fermented maize) and sodabi (an alcoholic drink taken from the trunk of the palm tree). With these three libations, the ancestor is invoked to provide peace in the family and safeguard the unity of the clan.

Being born in south Togo means, therefore, being welcomed by everything and everyone in perfect and complete harmony. The new child, whether male or female, will have much to learn from nature and from its ancestors.

PreviousKenya: The Maasai Ritual of Tying Grass
NextThe Church is Growing in Africa and Asia, But Facing a Crisis in Europe