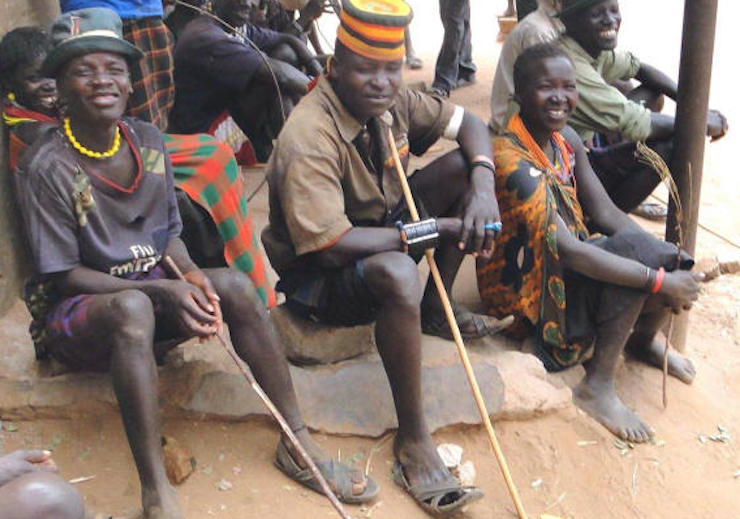 Atuwa is a celebration among the Karimojong, a group of agro-pastoral herders living mainly in north-east Uganda. This celebration is a genuine expression of the African sense of brotherhood, demonstrating the social traditions and lifestyle of the Karimojong community.

The celebrations unfold between September and November, at the end of the rainy season. They can last from five to ten days. Atuwa is celebrated when the harvest is plentiful, so that there is abundance of cornmeal mush and beer to be offered to those relatives and friends arriving from far away for this occasion. According to tradition, they will be hosted by their families in the community. The sense of hospitality, which is deeply rooted in African culture and its communities, is reaffirmed on this occasion in particular. Atuwa is celebrated every five years, based on a principle of rotation among the several Karimojong groups.

Big oxen are essential for the celebration, so the oxen’s owners and the elders of the community, the ngikasikuo, decide when the celebration must begin. Those giving the oxen must belong to sacred clans: the ngitaruk, ngikaala, and ngimailoko. To plan the event, the organisers gather in the woods and decide when and how the atuwa celebration will take place.

When etal, the moon traditionally required for atuwa, rises, young people go to the head of the community and his second-in-command and say: “The moon has risen and we intend to celebrate the atuwa.” News about the feast spreads rapidly. On the eve of the celebration, groups of men and women wearing dresses with rich ornaments arrive from the other villages. Men wear leopard skin clothes, helmets decorated with ostrich feathers, and arm and ankle bells, called ngitoroi. Women wear multi-coloured beaded necklaces, ngaculo, around their neck and loins. Everybody approaches the place of celebrations singing and playing trumpets made from antelope horn. After exchanging pleasantries with friends and relatives, everyone sits down on the banks of the river. Each group chooses a place to set up camp and spend the night.

Meanwhile, the local young people kill two or three oxen with spears, roast the meat, and distribute it to everybody, while the women serve beer to everyone. Everyone can take part in the atuwa celebrations, and everyone participates with enthusiasm. Later in the night, the sharp sound of a horn invites everybody to dance. So the atuwa dance starts, with everybody jumping rhythmically and singing the solemn akimwomwor chant. The women’s high-pitched screams provide the vocal background. Men and women, divided into several groups, sing and dance, only pausing to eat or get a drink.

At dawn, the atuwa organisers gather and move the oxen into a single enclosure, made from thorn bushes and stakes and built specifically for the occasion. At around 8 o’clock in the morning, the oxen are driven to the trees where the elders of the place have gathered. The oxen’s owners and members of the sacred clans ngitaruk, ngikaala, and ngimailoko kill the animals. On solemn occasions like the atuwa or the akiudakin, it is customary for young people among the Karimojong to demonstrate their bravery by killing oxen in front of the community.

Before commencing the banquet, the men who have undergone their initiation process gather around an epeduru, a large tamarind tree, or an ebobore, a wild fig tree. An assembly is then held in the shadow of the trees. The official speeches are given, interspersed with incantations and invocations to the deity akujé. The banquet begins after the speeches, according to the Karimojong’s tradition. On this occasion, young people and women are allowed to eat meat, which is generally consumed only by elders.

When the banquet is over, the prolonged sound of a horn is heard, and everybody gathers for the official dance – a sacred moment. This dance, called ekimwomwor and marked by quick rhythms and elegant singing and movements, expresses the feelings of brotherhood and joy. In the late afternoon, tired of dancing, people go back to their villages, staying with their friends and relatives. They drink locally brewed beer in an atmosphere of serenity and repose. In the main population centres, people may resume dancing into the small hours of the night.

After ten days of celebrations, when everyone has had their fill of food and dancing, people go back home, happy to have strengthened the bonds of brotherhood and kinship. Among the Karimojong, atuwa represents the celebration of friendship, infusing each individual with overwhelming joy that spreads from the immediate family to all members of the village, and then to the entire ethnic group.

PreviousSyria: Holy See Says Return of Refugees is Essential for Peace
NextDemocratic Republic of the Congo: “Why are you killing me?”