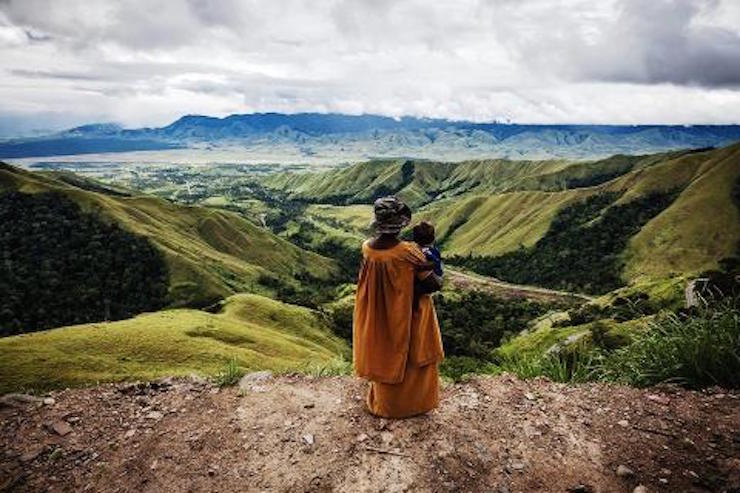 In the valleys of Papua New Guinea’s highlands, people live in isolated villages. Every day they take a long trip down steep mountains, along wild rivers, and through dense forests to reach destinations like the Tapini village, which has a school and a hospital managed by the Catholic Church.

Modern civilisation brings benefits, but also several new problems. “Today we haven’t walked much,” a young woman says, pointing to the two mountains she has passed. Her house is just behind them. She left home at dawn and has now arrived at the clinic, waiting to meet the doctor; she wants her son to be vaccinated. Walking for hours through mountains and valleys is absolutely normal for people like her: the Tapini village is located very near the impassable highland. But only the inhabitants of the capital Port Moresby, an eight-hour drive or several days’ walk away, refer to Tapini as a mountain village. By contrast, people who were born and grew up in the highlands area usually say “I’m going down to the valley”, as they live at even higher altitudes.

Morris Oki and his wife Teresa Aida have just moved here from the Goilala district. They will stay for about ten years: “We want our children to study here” Mr Oki explains – then they will resume moving again, as people in Papua New Guinea traditionally do.

The Tapini village was built by the “Missionaries of the Sacred Heart”. It is home to a school and a clinic where, every morning, Sister Marina Magaiva takes care of the mothers arriving from the mountains with their children. “Our main problem now is tuberculosis,” explains Sister Marina, who also works as a midwife.

The discovery of human settlements in the highlands of Papua New Guinea is fairly recent. Up until 1930, when some Australian gold searchers found several tribes living there with no contact with the rest of the world, everybody thought these areas were uninhabited.

The discovery surprised both the outside world and the tribes. The highland inhabitants thought they were at the centre of the world. The older ones still remember when they saw white-skinned men for the first time; they thought the men were the spirits of their ancestors. After the discovery, the highland became a destination for ethnologists, naturalists, and linguists.

The difficult-to-reach Tolukuma gold mine is also in the Tapini district. It presents a job opportunity not only for miners, but also for merchants and farmers. But the excavations have had dramatic consequences for both men and nature. One of the men says: “I worked in the mine when I was young with eight schoolmates, and I am the only one still alive”. The others got sick from mercury poisoning.

Civilisation brings progress in the form of schools and hospitals, but can also bring diseases and destruction. Modernity cannot be stopped; the door to the world has been opened, and it can’t be closed. Wulf Schiefenhövel, an anthropologist who has been conducting research studies in Papua New Guinea for many years, says, “Human beings cannot be shut into reservations. They can’t be asked to stay the way they are. The history of mankind is the story of changes through the acquisition of new techniques and new religions.” According to Schiefenhövel, “Isolated populations wish progress and want to get out of that ‘bubble’ on the borders of the world”.

Every morning at 9:30am in Tapini, a thirteen-year-old girl, Linda Oki, goes into the classroom and sits in front of a computer. Linda is the daughter of Morris Oki and Teresa Aida, the couple that has chosen to live in the mountains. She lives with her family in one room with no electricity. In this room, the family sleeps, cooks, and eats. Every morning Linda gets up at dawn, puts on her school uniform, and walks along the path leading down to the valley. At school she learns how to use a computer. “It’s not terribly amusing,” she admits, “but we learn a lot of important things at school.”

Sister Marina comments: “Considering their background, the results achieved by the children of this area are amazing. For them, the school is a window to the world”. But the education system seems to have worsened after independence in 1975. It is amazing how many old people can speak English perfectly; while it is difficult to find someone who can speak a foreign language among the young. This is particularly evident in the highlands, and it is also the reason why education in Tapini needs the support it receives, mostly from the Catholic Church.

The school facilities, built in the 1950s, were given to the state in 1984. “By the mid-1990s, most were run down,” says Sister Marina, a member of the order of the “Handmaids of the Lord.” At that point, the Church was asked to help with the facilities again. The Australian missionary Brian Cahill did all the necessary restoration, with help from his country.

The Port Moresby government is also contributing by providing the 270 students living in the boarding school with support grants. Though the state also pays for some of the clinic staff, many believe it should do more. The clinic staff includes the paramedics, who drive to nearby villages to vaccinate people every day.

The administration offices of the Goilala district are also in Tapini. But it is difficult to find employees there; they prefer to work in places along the coast, as the highland area is considered by the inhabitants themselves to be too dangerous because of its high rate of criminality and violence. A few weeks ago, Sister Marina was returning home after work, when some men who, sitting on the roadside apparently drunk, started insulting her. One threw a stone at her, which hit her head and made her fall to the ground, bleeding from a head wound. Sister Marina has recovered in the meantime, and plays down the accident. She is already busy taking care of another mother who needs her help.

PreviousPatriarch of Constantinople: “Without Synod’s decision, discernment between orthodoxy and heresy is not possible”
NextBenin: Cotonou by Motorcycle Taxi