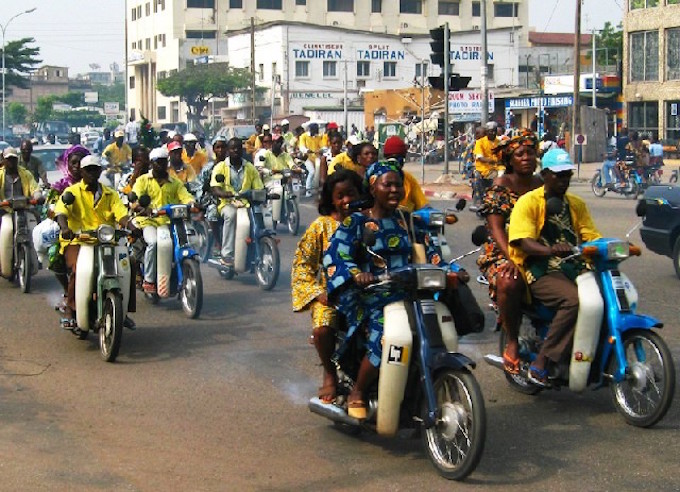 Cotonou, Benin’s economic capital, is overrun with motorcycle taxis. In a local language, they are called zémidjans. They are the fastest way to get a ride from one part of the city to another. No MotoGP pilot could ever compete with reckless zémidjan drivers.

Their motorbikes are fuelled by gasoline of dubious origin and leave behind a strong smell. Their yellow jackets are the first touch of colour that visitors perceive as they arrive in the city. Motorcycle taxis are the most common way of travelling around Cotonou and have become an essential service for this ever expanding city.

According to the latest official figures, Cotonou is home to about 720,000 people, although some estimates suggest more than a million. This is not unusual in a country with a population of almost nine million. But if we consider that in the mid-nineteenth century, when the French settled there, this place was just a small fishing village, it is an amazing leap.

The country, previously called Dahomey, achieved independence in 1960. Dahomey was founded as a kingdom in an attempt to defend the population from slave hunting, which frequently took place along the country’s coast. In 1975, the country adopted a new name: Benin.

The slave trade lasted until the middle of the nineteenth century, when it was replaced by the production and trade of palm oil. This was exploited both for cooking and for industrial uses, especially to manufacture soap.

Although Cotonou is Benin’s largest city, Porto-Novo is the official capital. It lies about 60 miles east of Cotonou and still houses a few ministries and government agencies.

The country’s major industrial and economic resources are in Cotonou. These include the Dantokpa international market, the largest in West Africa, covering an area of 20 hectares, where retail and wholesale buyers can find all kinds of goods.

Transactions amount to, on average, almost two million a day. This figure includes local traders and those from neighbouring countries, especially Nigeria, who buy large quantities of products for informal trade.

Another major source of income in Benin is the Autonomous Port of Cotonou, one of the largest ports in West Africa. 90% of the country’s foreign trade transits here; and it accounts for 60% of the country’s GDP. The port houses large storage facilities for the goods of landlocked neighbouring countries or for export goods. This allows Benin to charge taxes for the storage and warehousing of goods and to hire a large number of workers.

Mali, Burkina Faso, and Niger are among the neighbouring countries involved in this trade. Niger relies on the Autonomous Port of Cotonou to export the uranium produced in the Arlit mine. The transit of Nigerian uranium through the port of Cotonou is expected to increase following the exploitation of a new oilfield in Imouraren, which could turn that country into the second-largest producer of the strategic mineral.

Cotonou’s climate is rainy and warm, thanks to its location opposite the Gulf of Guinea and its proximity to the equator. The city is characterised by huge, beautiful, sandy beaches and palm plantations. Cotonou is cut in two by a canal, the lagoon of Cotonou. This connects the sea to Lake Nokoué, which delimits the whole northern urban area, while the Atlantic Ocean borders the south of the city.

Ganvie is just an hour north of Cotonou, beyond Lake Nokué. It is one of the most attractive places on the continent, dubbed the “Venice of Africa”. It is a village built largely on stilts made of bamboo and mangrove trunks sunk into the water. It is criss-crossed by hundreds of canals and is home to about 20,000 people, who use canoes to get from one place to another.

Here one cannot travel by zémidjans – there are no roads that go around Lake Nokoué. The best way to travel, though it may seem unsafe, is by canoe. It will take you safely to the other bank.

Besides French, the official language taught in schools, the main languages spoken in Cotonou include Fon, Adja, and Yoruba.