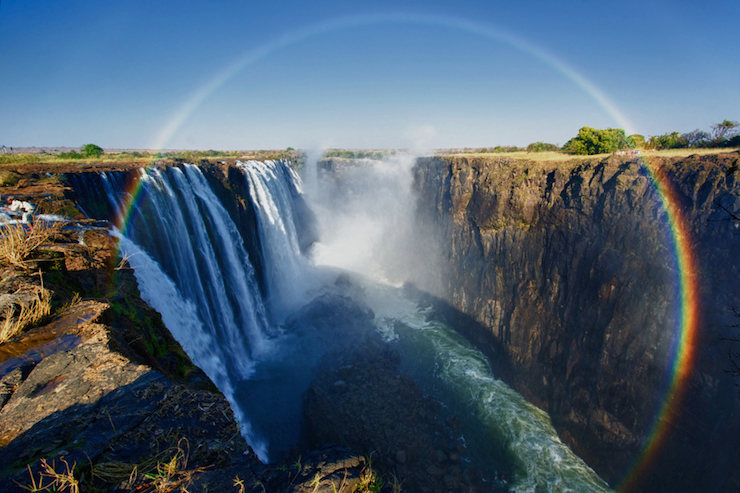 Livingstone is a tourist city, situated in the southern part of Zambia and bordering on Zimbabwe, Botswana and Namibia. The city is afflicted with high unemployment; women and young people are most affected. Jobs in the city are mainly provided by cross-border trade and the hospitality industry. Most people run small-scale businesses, for example selling tomatoes, vegetables, onions, or second-hand clothes.

Livingstone is associated with beautiful tourist attractions like the mighty Victoria Falls, known locally as ‘Musi-O-Tunya’, which means “the smoke that thunders”. Other attractions in Livingstone include the National Parks, helicopter flights, elephant rides, and water rafting.

The man behind the establishment of Radio Musi-O-Tunya is Father Cletus Mwiila, a diocesan priest from Monze diocese. He shares his memories: “I remembered very well when the bishop asked me to establish Radio Musi-O-Tunya. I was just coming from my studies in communications in Rome. It was an exciting experience, besides the difficulties”.

In just a few weeks Radio Musi-O-Tunya was growing in popularity. Livingstone is surrounded by villages like Mukuni, Musokotwane, Kasiya and Simonga, to mention but a few. People in these villages became great fans of Radio Musi-O-Tunya, which broadcasts in their own languages (Lozi and Tonga).

Father Mwiila explains that the station is so successful because it treats issues that concern local people’s social, economic, spiritual and political life. Some of the villages have listening groups for Radio Musi-O-Tunya, based on which they provide regular feedback.

To engage closely with all the diverse populations it reaches, Radio Musi-O-Tunya broadcasts in three languages: English, Lozi, and Tonga – making it easy to disseminate information to different ethnic groups. The station operates from 6am to midnight and has 20 listener groups, with at least 15 members in each group. Radio Musi-O-Tunya’s target audience is the Catholic faithful and the general public.

In 2007 the station saw a new approach when Father Mwiila was replaced with Sister Namasiku Mutonga Perpetua, who summarised her leadership at the station thus: “Radio Musi-O-Tunya was established to enhance evangelisation in the diocese of Livingstone. As the vision states, we offer a platform for integrated evangelisation, freedom of expression and information dissemination to the people of Livingstone and the surrounding areas. We are achieving this by empowering people with quality broadcasting in the areas of social, economic, spiritual and political competence for sustainable development in Livingstone and the surrounding areas”.

It is not easy to run a radio station in Africa. As Sister Namasiku has remarked: “It’s a well-known fact that running a community radio station like Radio Musi-O-Tunya in Africa, and Zambia in particular, and depending solely on paid staff, is a nightmare. Involvement of community volunteers is always a better option. Because the revenue coming from the radio station’s core business of airtime is not enough to cover basic expenditure, let alone pay workers’ salaries”.

Radio Musi-O-Tunya is located in Zambia’s tourist capital, but Livingstone is nevertheless a small city with a small population; the majority live in the countryside. Against this background, there are two commercial radio stations in Livingstone which are community-based. So the competition the small community faces for advertising, especially from business, is stiff.

According to Sister Namasiku, “It is for this reason that Radio Musi-O-Tunya from its inception was established to be a community radio station. Since then, we have emphasised community involvement, and the majority of the radio station’s workforce comes from the community, with just a few staff employed to run the daily operations”.

In all, Radio Musi-O-Tunya has twenty-five community volunteers who act as presenters and producers. Some volunteers have two or three shifts, each running from 6am to midnight, in a week – a serious commitment, and proof in itself of the station’s great popularity among local people.

There are also other community volunteers, known as discussants, who support particular educational programmes (broadcast weekly) by taking part in discussions and sharing their skills and knowledge. These volunteers come to the radio station once a week for discussions either in English, Lozi, or Tonga.

Apart from community volunteers, there are also associates. These are friends of Radio Musi-O-Tunya, who come to the radio station to make their own programmes of interest, targeting a particular audience.

Overseeing the process is Radio Musi-O-Tunya’s ten-member board and its sub-committees, which see to administrative and public relations, finance, religious programmes and information technology. The sub-committees consist of the director of the radio, a board member, a staff member, and one or two members from outside the board and management.

To provide ongoing engagement across the diocese, all parishes in the area take turns to present Sunday Mass. Sunday Mass is recorded in the morning from a selected parish and broadcast at 3pm on the same day.

Radio Musi-O-Tunya sustains itself through its airtime, project proposals, writing, and through small established investment. But despite these efforts, the radio station’s income remains lower than its expenditure. The big challenge of Radio Musi-O-Tunya is to secure sufficient funds for its extensive community operations.

Turning to the future of the station, Sister Namasiku is hopeful: “The future of Radio Musi-O-Tunya is still bright despite its limited resources. Our focus is on self-sustainability. We are currently looking into farming enterprises, and in 2012 a local chief, Chief Mukuni, offered 300 hectares of land (farm) to Radio Musi-O-Tunya. The farm is surrounded by three rivers and thus has plenty of water. Apart from that we are working to open a professional music recording studio for income-generating activities. We are currently sourcing for funds for these activities”.

PreviousBenin: Cotonou by Motorcycle Taxi
NextThe Mufti of Singapore to the Catholic Archbishop: “The Massacre in Lahore Is Against Islam”