Tanzania: The Mother of the Community 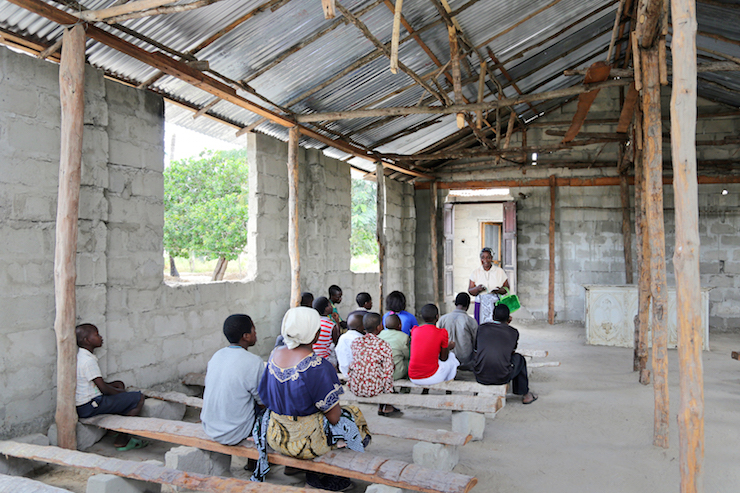 Margaret John Kiria manages to combine the hard work of a catechist with looking after her family, showing kindness and energy.

It is still dark in Bagamoyo on the coast of Tanzania. Margaret John Kiria, 40, wakens her two daughters Cecilia, 15, and Claudia, 13, and carefully checks her mother’s blood pressure. Before the day breaks and the vast Indian Ocean is lit up by the sun, Margaret is already on her way. She is easily recognisable by the bright green handbag on her arm. She enjoys the fifteen-minute walk from her mud hut to the parish community centre “The Apparition of Our Lord.” Those few minutes of silence before dawn are usually the only time of day she can call her own.

In the dormitories of the community centre primary school, 250 pupils are still sleeping, their heads buried in soft pillows. Margaret has to waken them from their dreams with a loud and pleasant “Good morning! It’s a lovely day today!”. It takes some time before they are all on their feet, washed, and dressed in their school uniforms. While they are getting ready, Margaret prepares breakfast – porridge and sweet gruel – for her army of children. It takes just a glance to see if they have washed and dressed properly, and a simple wave of her hand to call the children to order – even the drowsy ones – and have them form lines. She then serves breakfast, filling the coloured plastic cups from a bucket. With every serving the noise gets louder, but Margaret claps her hands once and the quiet is restored. She doesn’t need to raise her voice and uses simple gestures more than words to make herself understood. The children are used to the procedure, and after a few moments of silence they start morning prayers and are on their way to school.

The “noisy brigade” leaves Margaret in peace – which doesn’t last long. She has to instruct some children in catechism. First, she meets Father Francis Kimaro, one of the three Spiritan missionaries serving as priests for the extended community of Bagamoyo. Together, Margaret and Father Francis plan the day’s work. Father Francis asks Margaret to go to one of the ten chapels of the parish to meet two young and inexperienced women catechists at the small community of St Teresa, to go over the readings of the coming Sunday with them.

She finds the two young women waiting for her at the half-finished church of St Teresa of Kiromo. Some local residents have decided to join them in the hope of attending a catechism lesson. They will not be disappointed, as Margaret is an expert catechist and needs no special preparation today. She takes her book of lessons from her green bag and explains to her listeners that Christian parents must give a good example to their children and be their first teachers. After about half an hour the small gathering disperses, satisfied. Margaret shows her appreciation for the preparations the two young catechists have made for the Sunday Mass and encourages them to continue their work. Now it is time for her to return home.

Before leaving, she visits Father Valentino Bayo to report what she has learned at Kiromo and Sanzale. Father Bayo is the Parish Priest and as a catechist, played an important role in Margaret’s life. It was Bayo, as Father Valentino is usually called, who established the Catholic Church at Bagamoyo. In the early nineties, the Christians of the coastal town – only a few thousand out of a population of 30,000 – found themselves with no priest. Bayo offered his help. He didn’t want to stand and watch helplessly while an area so important in the history of the Church and the Spiritan Congregation went to rack and ruin. It was there that the Spiritans founded the first Catholic mission of eastern Africa, and the first of their Congregation. They began by setting up a Christian village to provide housing for ransomed slaves. From there the Spiritans spread the Christian faith throughout the hinterland of east Africa, building churches, schools, and medical centres and training catechists.

Bayo must have remembered the tradition of training catechists during his first year at Bagamoyo, when he met Margaret. She had only recently moved there from her native village at the foot of the Kilimanjaro to find work as a kindergarten teacher. Being a good Catholic, Margaret already knew the catechism well. She had attended the training Centre at Moshi. Bayo immediately saw the potential of this young woman and, a few years later, managed to convince her to place herself at the service of the community. Father Bayo appreciated her talents: the ability to listen to the concerns and sorrows of the others, and her years of experience as a catechist. “Margaret immediately understands the heart of a problem. If she can, she solves it personally; otherwise she comes to me. She is a bridge between me and the community.”

Margaret’s life has never been easy. The father of her children refused to marry her and one day he just left. However, her personal problems have never prevented her from conscientiously carrying out her work for the community: she is untiring, fond of the place, and very trustworthy. She has done her work faithfully for twenty years now. Bayo calls her the “matron of the parish”, since she is so proficient in combining her work as a catechist with that of a mother. She is modest and, though she is happy to receive praise from the Parish Priest, it causes her some embarrassment. “Now I must go,” she says, and off she goes with her green bag securely on her arm.

PreviousSouth Sudan: The Consequences of Two Years of War
NextGhana: Garments that Speak of History