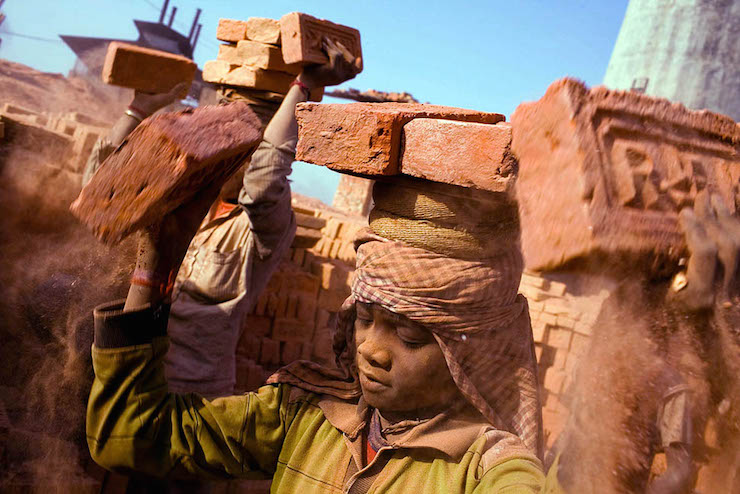 Hundreds of children work in the brick factories of the suburbs of Kathmandu. Together with a group of volunteers, Father Joe Thaler tries to give dignity, hope and a future to many of them.

The children shyly show their hands and follow the instructions of the teacher, dressed in a coloured sari. Only when the soap works up into a lather between their fingers does a quick smile appear on their faces. Jyoti Devkota is not a dance teacher, even if the movements she makes to show how to wash are fluid and graceful. Jyioti is a nurse and takes care of the workers in the brick factories of the suburbs of Kathmandu – Nepal’s most populous city, which lies at an altitude of 1,400 meters and is surrounded by the highest mountain massif on Earth, the Himalaya.

The labourers working in the more than 120 brick factories are several thousands; and what they earn is a trifle. Not only the adults impair their health with this exhausting work. Many children, often barely 6 years old, drudge in the factories. Jyoti teaches the children how to wash their hands accurately, so that they at least avoid infections. Nira Lama follows the hygiene class attentively, but she has to stop often as a result of heavy coughing fits. Nira is four, and she suffers from a chronic infection to the respiratory system. Jyoti’s cough syrup gives her some relief, but it does not cure the illness. Jyoti puts an arm around the girl’s shoulders and smiles at her. Sometimes the only means she can use to help the inhabitants of the suburbs of Kathmandu are affection and warm-heartedness.

Arati Basner, the founder of the Care and Development Nepal Organisation (CDO), believes that there is still much to do. She put Jyoti in charge of the hygiene lessons. Aside from hygiene, the organisation’s commitment to improve living conditions includes health, nutrition, the introduction of better working conditions for children, and the improvement of their school education. “It is the only way for us to mitigate their sufferings”, says Arati, who was once a migrant. Her family was driven out of Bhutan in 1990. Arati then attended the school run by the missionary sisters of Saint Philomena in the Darijeling region. There, she developed her deep sensitivity towards the weak and the outcast. She explains: “After school we went with the nuns in the nearby villages, bringing the essential to the poor”. Arati wanted to study welfare at any cost. Today, together with Father Joe Thaler, Arati can implement what she learned with the nuns in northeastern India.

Father Joe Thaler is a Maryknoll Missionary and he has been working in Nepal since 1977. Arati met him after finishing her studies. It was Father Thaler who helped her build the charity, which now co-operates closely with the Catholic Church. Father Joe deals with funding, using his network of contacts all around the world. Many children working in the brick factories are given financial assistance so that they can attend school and the nearby kindergarten, founded by CDO. Arati Basner never tires of saying that education is the key to a future of hope, which will allow the children to have a better life than their parents.

A better future is also what Suba and Saili Lama – a couple living in a brick hut with no running water or sanitation with their five children, Raiu, Rajan, Hira, Meera, and the little Nira – would like for themselves. A gutter and a pool, in front of the hut where clay is moulded, are used to wash dishes and for daily care. The hut is narrow and windowless. Inside, there is a rice-straw mat, a couple of belongings, and a fireplace. In the best times, the family manages to eat twice a day. In this area of Nepal, 90 children out of 100 are undernourished.

The burning heat at this altitude causes skin damage and mycoses even in the little ones. Per capita income is around £20 a month, and most of the time this is not enough. That is why many families fall into debt over everyday expenses. Drug abuse and human trafficking are unfortunately a regular occurrence.

Every year, 20,000 girls between 8 and 18 are sold as sex slaves in India. The statistics on marriages between adult men and teenage girls are also alarming. In recent years, the number of girls who are forced by their families to marry before the age of 15 has risen to 3 million.
Meanwhile, the Nepal Children Network denounces the exploitation of about 1.8 million children employed in brick factories, commercial activities, and prostitution. Of these, about 21% do not attend school. The Network also signals the increase in denunciations of sexual violence on young people under 18 – victims of about 49% of rape, abuse, and sex slavery cases.

That is why the work done by Arati and Father Joe is even more important. Thanks to their commitment, parents like Suba and Saili might give their children a better future.

When the school bell rings, the pupils leave their classes in a rush. They say good-bye to their teacher by shouting “Tashi delek, tashi delek”. This ancient Tibetan greeting means “I hope you are well!”, and it is what Arati wishes all her children.

PreviousKenya: “Practicing Peace Rather than Creating Structures for Violence”
NextMexico: Solidarity Without Borders