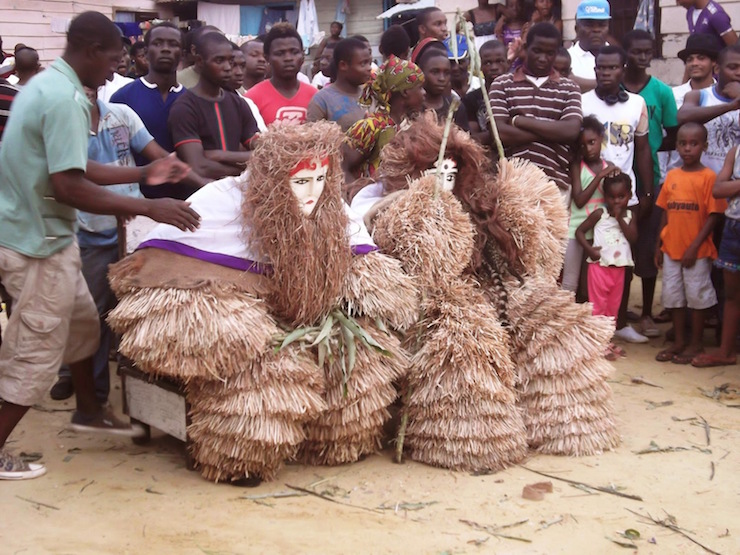 The Ndowe people of Equatorial Guinea live along the banks of the Rio Muni. Of all their traditional feasts, the Mekuyo celebration stands out for its rich popular flavour. Any social event is reason to celebrate.

The clown, or Mekuyo as the Ndowe call him – is completely covered with small bamboo canes tied together, and his hands and feet are covered by dark stockings. His face is a mask of bright colours: white, red, and black painted to make him look frightening.

Even though the celebration does not reach its climax until dusk, the village begins the day with the sound of typical songs – the Mekuyo and his assistants make the first round of the village to the beat of a drum. The mid-morning is for the children. The Mekuyo walks through the village scaring and chasing boys and girls. They try to get away from him – or to attract him by clapping their hands, shouting, and singing. At times the Mekuyo runs towards the frightened children, who scurry to take cover in a corner of the village; at other times, he makes signs to show he likes the children’s songs. The children escort the important figure in fancy dress while marching and singing. If the Mekuyo falls or uncovers a hidden part of his body, everyone refrains from looking and commenting. Doing so would incur punishment or even a curse.

In the late afternoon, with the sun still high, the feast progresses. First, the scene must be prepared. Any open space will do; but usually, the courtyard of the house where the feast is being celebrated is chosen. There are many reasons for calling the Mekuyo: a wedding, a special social event – a celebration of any kind. The family organising the feast provide the Mekuyo and his companions with plenty of drinks and liquor. They place a high seat or armchair in the centre of the courtyard as a throne for the Mekuyo. He sits there and, at the proper time, begins his frenzied moves and dances. In front of the throne, leaving plenty of space for people to dance, a hedge of vines or other plants is erected. The women gather near the fence, dancing rhythmically to coax the Mekuyo to appear and entertain those present with his exciting movements. A bonfire is kept burning. It is an atypical bonfire in that the flames are hidden and only the smoke can be seen. A large branch or small tree is at the centre of the bonfire. The entire celebration takes place surrounded by the smoke of the bonfire, in the heat of the afternoon sun, accompanied by the echoes of female singing.

The Mekuyo arrives to the courtyard with his entourage to the rhythm of the usual drum and walks towards the small house built for him. This hut must be very close to where the feast takes place. It is concealed from prying eyes; only the Mekuyo’s comrades can enter. If women were to see what goes on in there, they would be severely punished. The same would happen if they were to criticise the Mekuyo’s behaviour.

At the sound of the drum, the women begin their song, waving one arm in the air. The Mekuyo is about to come; he does not keep people waiting. He appears with his funny, exaggeratedly solemn gait and ridiculous gestures, with a green branch in either hand. He delights the spectators with some ridiculous moves and then takes his seat on the throne. The women intensify their song. Now the men, too, take part: with green branches in their hands, they approach the Mekuyo, inviting him with leaps and gestures to begin his dance. At first, the Mekuyo pretends to take no notice. But he soon begins to grow restless, and finally launches into a spasmodic dance, shaking frenetically like an electric puppet.

At this point, the people are very excited; but suddenly the Mekuyo makes an abrupt gesture and stops. The whole process must begin all over again: the women’s songs, the men’s gestures and, finally, the Mekuyo’s dance. Women aren’t permitted to enter the dance enclosure – it is only for adult males. Women enliven the feast with songs and dances.

During the afternoon, several different Mekuyos appear, up to four or five. One after the other, they repeat the same scene; at times they may act all together. The feast goes on for three or four hours without a break. It climaxes as night falls. Instead of branches, the Mekuyo gather glowing firebrands. The leaps and dances become increasingly impressive – drink inevitably plays its part. Then, slowly, the feast dies down and ends with the darkness.

But women do enter for the briefest of moments. They dance in a different manner to the men and, before going back to their places, offer a small gift to soothe the men’s indignation – usually a coin. Boys also cannot approach the Mekuyo. Their role is to flee, pretending to be frightened. When they approach adolescence, their fathers or other male family members introduce them to the secret of the Mekuyo. From then on, they can take part in the dances with the other men. No one, not even the women, can ask them to reveal the secret. If they are questioned, they will not answer; they will express great anger and, if the question comes from someone younger, might even slap them.

Where does the Mekuyo originate? What do the theatrics mean? What does it mean to the Ndowe today? Without doubt, the feast is a ritual and symbolic occurrence. The Ndowe say very little about the Mekuyo; most of the ritual’s significance is secret.

The Mekuyo ritual originated outside the scope of the ethnic groups who now practise it. It began along the coast of Gabon, expanding towards the north. In the middle of the nineteenth century, it reached Kogo and Corisco, and in the twentieth century it reached the Ndowe of Bata and its surroundings. Compared to other Ndowe traditions of the area bordering on Cameroon (Bevala, Mokuku), the Mekuyo is clearly different, as it is celebrated by day and often with the whole village participating. It lasts for just one day, and the magical element is minimal. It is not associated with other curative or religious rites. At first sight, because women and children are excluded, the ritual’s role could be to highlight male courage. Other legends speak of a forest animal that accidentally came across a woman and asked her to take it to the village. She was frightened and did not dare to do it, instead running to the village to tell everyone what had happened. The men coaxed the animal into the village and played with it. Yet other legends speak of a bear that terrorised a village until the courageous men captured it, making it fall into a trap. They carried it to the village and showed off their courage while teasing the animal.