Jordan: A Sense of Dedication 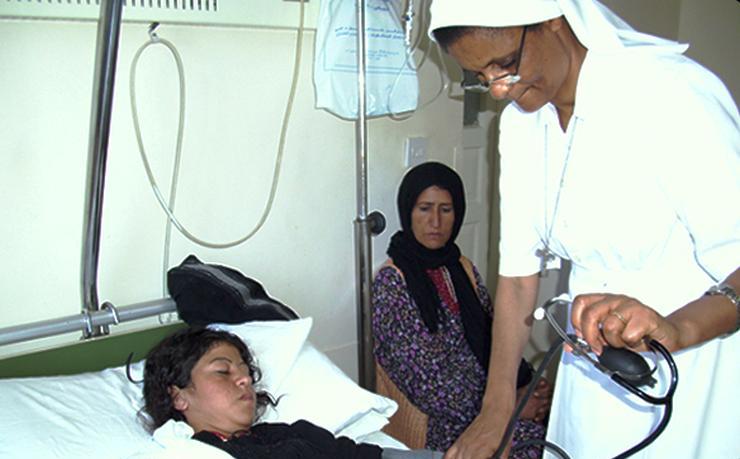 A journey to Jordan’s poorest province reveals a hospital, run by the Comboni Missionary Sisters, in which Christians and Muslims work side by side.

Karak is a town in the Jordan’s poorest province, 100 miles south of Amman, is home to 60,000 people. The town, where Christians make up 3% of the population, is also home to a hospital which has been run by the Comboni Missionary Sisters since 1935. 65-year-old Comboni Sister Adele Brambilla, the Director of the hospital who works alongside five other nuns, said: “Our hospital is part of this city’s history. We feel respected by the Muslim religious authorities, whom we have a good relationship with, and the people trust us and the professionalism of our staff”.

About 80 people and 8 doctors (6 Muslims and 2 Christians) work at the hospital full-time. In addition to this, there are 53 specialists who are present on different days of the week and act as external consultants, of which 12 are Christian and 41 Muslim.

One of them is the Muslim surgeon Awadh Dmour, who is married and a father of six. He said: “I really like working here, both because I was born in this area so I have the chance to help my people and because this is a top-class healthcare facility, with an excellent reputation, close-knit staff and it offers quality treatments, whilst guaranteeing that everyone receives assistance, especially the poor”. Last year, more than 22,000 people were offered assistance at the hospital.

The relationship between Christian and Muslim health workers is very good: “There is a climate of great respect and familiarity, so we even celebrate our respective religious feasts together. We share each other’s joys, hopes and hardships, but most importantly, we all work with a sense of dedication as we are all aware we have a common mission: to treat everyone, no matter what their ethnicity or religion – with special attention to the poor. The principle of healing, which is what inspired the establishment of this hospital, is what motivates each and every one of us,” Dmour said.

He continued: “I think it is very important, vital in fact, for Christian and Muslim doctors to work together in looking after the suffering. There is a great spirit of collaboration between us. We do not distinguish between Christians and Muslims, nor are there any prejudices or obstacles of the sort. We support each other and work well as a team. This hospital is like a family to me”.

Most Christian and Muslim patients are from lower- to middle-class backgrounds, but there are also many who are very poor and have no access to the state hospital in the city. And then there are the refugees. Over the decades, the hospital first admitted Palestinians, then Iraqis. In more recent times, the hospital has been collaborating with Caritas Jordan and the United Nations High Commissioner for Refugees (UNHCR) to offer assistance to Syrian refugees. Many come to this area to try to rebuild their lives, having abandoned the camps set up in northern Jordan.

Sister Adele said: “These are families who have lost everything; they are very poor and are in search of work. They often choose to live together in miserable conditions: sometimes there are as many as 15 people living in apartments consisting of only 3 rooms. Many others, Christian and Muslim refugees, arrive directly from Syria, having endured painstaking journeys – and they are exhausted. One day, a woman who was nine months pregnant arrived here: she had fled Homs, where she lived, and had made it to Aleppo before fleeing to another Syrian city; and from there she crossed the border to get to Karak. When we admitted her, she has worn out. I asked her why she embarked on that terrible journey, given her condition, and she answered plainly: ‘So that I could give birth to my child in a safe place’”.

On top of their numerous physical illnesses, many refugees also have wounded souls: “All the horror and pain they have experienced can be seen in their eyes,” Sister Adele said. “Children especially are under shock: I still remember one little girl who suddenly lost all her hair out of fright. What is deeply demoralising adults is the state of precariousness and uncertainty they are forced to live in: they have no idea what is going to happen to them or whether they will ever be able to return to their homeland.”

Dr Awadh added: “I feel great compassion towards them. As a doctor, I am very concerned about their health, because it is hard for them to gain access to medical care, which people have to pay for if they are not insured. When people get sick, they often turn to the local NGOs for help in covering their expenses, but not all their needs can be catered for straight away. They often have to wait a long time. This is why we are doing all that we can here to help them, especially in the case of emergencies, where a solution cannot be found anywhere else”.