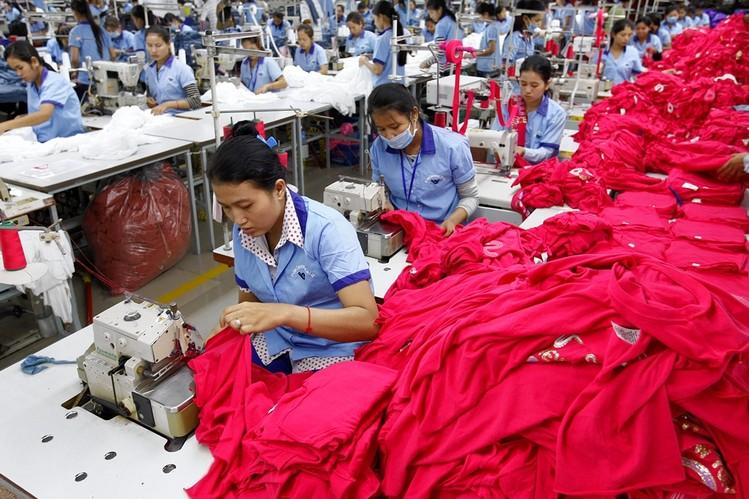 The Lindalva Centre in Cambodia was founded by missionaries to support families and women who work like slaves in the country’s textile factories.

At quarter past eleven, a number of pregnant women leave through a small door next to the entrance of the Hansoll textile company, a Korean firm located in the industrial area of Cambodia’s capital Phnom Penh. They walk fast along the dusty road, only briefly seeking shelter from the sun in the shadow of trees. The heat is oppressive, and these few minutes of rest are the best moment of the day for the women. Five minutes later, the main entrance of the factory opens and a large group of women join their colleagues for a joint lunch.

The bright colours of their clothes and their jokes almost make one forget the reality of their lives; these women have few reasons to laugh. Many of them work under terrible conditions in textile factories that produce trousers and shirts for Asian and European markets. They have to produce as much as possible, in the shortest time possible, and at the lowest price. The wages they earn are barely enough for them to survive, even when working overtime. Earlier this year, the minimum wage in the textile sector was €62 per month in Cambodia. Workers should be earning four times more to guarantee their survival – according to “Asia Floor Wage Campaign”, a campaign for a pan-Asian minimum living wage. The initiative brings together labour and human rights organisations. Strikes, and sometimes violent protests and clashes with police, have taken place in Cambodia, injuring and even killing some workers. Only a small increase in salary was achieved as a result of the industrial action. The “Asia Floor Wage Campaign” has been supported by an international campaign launched to raise awareness about workers’ conditions in Cambodia, with workers suffering from poor nutrition, long working hours, miserable living conditions in the factories and in their shacks, and a lack of safety standards and health benefits.

The industrial area of Pochentong is near Phnom Penh’s airport, in an area that used to be a swamp. But when Chinese and Korean companies discovered that Cambodia is the “kingdom” of cheap labour, industries multiplied around the capital, and workers now live in the slums of the industrial areas located just behind the factories. There are no paved roads there, and workers have to walk through dirty water to get to the factories.

Oum Ratha is a 15-year-old girl living in a tiny shack with her parents and two brothers. Posters of actresses and models line the wall next to her bed. Children and teenagers are those who dream about a better life the most. Oum’s family moved to the city from the countryside, searching for work in a textile or footwear factory. There are plenty of work opportunities, but the wages do not guarantee an acceptable standard of living. Oum left school to go to work in a Chinese factory: “I showed my boss the document of my older sister pretending to be older to be hired”. She sews and irons T-shirts, working twelve hours a day from Monday to Saturday. And what about Sundays? “On Sundays I sleep, and if somebody lends me a book, I read a little bit”, she answers.

Cambodia has signed international conventions on child labour and has approved the minimum wage guidelines. The factory workers are mainly women and girls aged between 18 and 25. There are no kindergartens, and children are left at home alone while their parents are away at work; some of them wander the streets, begging. Some parents are forced to lock their children in their homes to protect them from being kidnapped by child traffickers.

Eighty lucky children get to attend the Lindalva Centre, which was founded by the French nuns belonging to the Order of the Daughters of Charity. The centre is an oasis in a slum. It offers the opportunity to attend school in simple premises, but with well-equipped classrooms. Oum Ratha’s younger brother attends regular classes in the centre. He also has lunch there and plays with other children in a safe environment. His mother pays the very minimal school fee when and if she can afford it. The centre also gives mothers the opportunity to attend professional training courses and provides mental health support.

Sister Eulie, a member of the Orders of the Daughters of Charity, says: “When we arrived at Pochentong, we met 300 textile workers; we spoke about their situation with them, we visited their homes to better understand their most urgent needs”. The nuns try to help the neediest at the Lindalva Centre, but they also operate across the entire Takeo province. They reach out to the villages of the province and try to convince people not to abandon the countryside. “We started food programs and founded small circles where women can meet and support each other with microcredit in several villages, while men have the opportunity to open small scooter repair shops”, Sister Eulie explains.

Some women are saying goodbye to each other after having met in Saepean. They have checked the accounting and talked about diverse microcredit projects. When Ouch Prak comes back home, her little son is lying comfortably in a hammock in front of the house, while her husband is feeding some baby ducks. Sister Eulie is also there; she has come to see how things are. Ouch Prak smiles at the nun and proudly shows her the pink notebook in which she writes down her expenses and small incomes. “I am happy because I got the microcredit loan, and so we were able to buy a hundred baby ducks to be sold once they become adults; this way I will be able to return the loan and make some money. I do not have to work in a factory and leave my children alone at home anymore”, she says.

But the Lindalva Centre is too small to help all those who need support, and so the nuns have already started to look for a larger place. Sister Eulie says: “We do hope that we may soon be able to help many more women and children; however, it would help if European consumers became aware that clothes at bargain prices often involve labour exploitation of adults and children. Everybody should contribute to eliminate this plague, we religious cannot do it alone.”