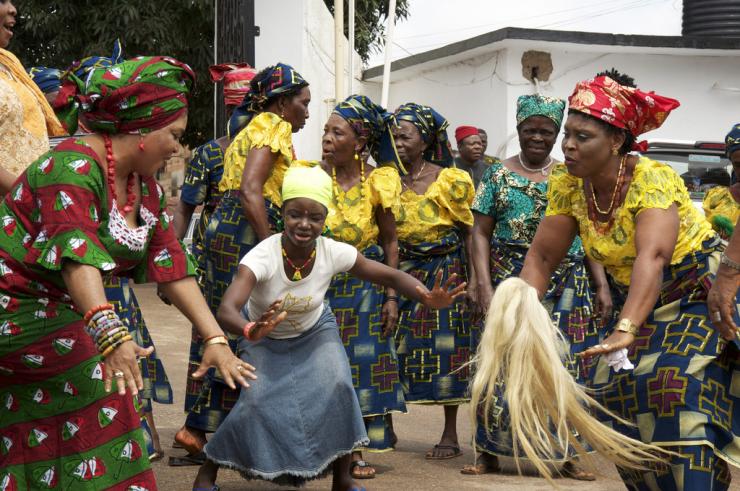 The annual yam festival is one of the most important moments of the year for the various Akan groups in Ghana and the Ivory Coast. It is experienced with great intensity.

The yam is a plant with a climbing stalk, cultivated in many parts of West Africa. Its tuber is the basis of nutrition for many people. It is such an important food that when it is harvested, whole groups come together to celebrate.

In the late afternoon of the day before the festival, which is held during the autumn season, a drummer travels the streets to announce its beginning. In the meantime, men and young people prepare big logs, to be offered to the chiefs and elders of the village.

At sunset, the adults gather in front of the village chief’s house, each with his log on his shoulders. The drumming begins, and everyone sings an ancient chant to honour their chief. They then go into the chief’s court one by one, offering their gift with a profound bow at the chief’s feet. The chief is seated on a throne, and in a sign of “annual obedience” signifying submission and acknowledgement of authority, the adults present their gifts by saying, “Here is your log”.

The wood is mostly used to prepare food, but some logs are lighted the same evening and will burn throughout the night. In the past, all the village’s fires were extinguished, and everyone came to light their fires from the logs burning in the chief’s court. Today, this no longer happens. The only ritual that is still in place is that of putting out the old fire in the chief’s court and lighting a new one with the offered logs.

The fire is left to burn through the night because people believe that the deceased chiefs return to converse around it. The same fire will burn in the courtyards of the family chiefs. While the living are deep in slumber, those who used to dwell in the village return and roam the area, stopping in their old homes.

During the days preceding the festival, litigations and problems are resolved through public debates. After this internal cleansing, it is time for a material cleansing too – including houses, kitchen instruments, pots, mortars, pestles, and all other commonly used items.

The yam festival is a celebration in which everything and everybody is renewed; the “dirt” gathered during the past year is removed from people and things. Everything must be refreshed: walls are covered with red earth; the main rooms are painted; mortars and pestles are washed and decorated with drawings. The entire village’s rubbish is collected, put in huge washbasins, and brought out of the village to be thrown away.

On the morning of the festival, the group gathers in the village chief’s courtyard, alongside his officials and his spokesperson. The chief is dressed in gala attire: a traditional multi-coloured toga, decorative jewels, a gold studded crown, golden or gold-plated sandals, rings, and bracelets.

The traditional ceremonies begin at around ten in the morning in front of the village chief’s house. A girl carries the stool of the ancestors, covered in a drape, on her head, alongside two talismans – the divinities of the group. Some women carry the washbasins, filled with waste to be thrown away. Eight youths carry a rich velvet parasol and an ornate, decorated stretcher towards the chief, and the procession commences. A space not far from the source has been prepared, where the king’s first wife will wash his hands, feet, legs, and face; his cleansing is a symbol of the cleansing of the entire village. An elderly matron then lets the crowd “participate” by sprinkling it. The king, once purified, will wash the stool and the talismans.

The return is triumphant. One of the most solemn moments of communal life is being celebrated. It is a hymn to the never-ending life of the community, founded on the union with the ancestors, who continue to assure the protection of their descendants.

Once everyone has returned to the chief’s courtyard, the central part of the ceremony is prepared: the offering of drink, food, and sacrifices. The ancestors’ stool – the most sacred object – is at the centre of the courtyard, alongside the two talismans: two pumpkins wrapped in a net. The stool is ancient; it belonged to the group’s founding ancestor. The first offering is the drink: the chief pours it slowly while invoking the names of his ancestors. It’s the food’s turn next: the new yam tuber. The yam was boiled the night before and reduced to flour, which the king spreads on the stool in handfuls, as a symbolic offering. The lamb’s sacrifice follows. Bowing before the stool with one hand on it, the king presents the lamb to his ancestors while reciting a prayer of intercession for the entire village. He asks for blessings for the harvest, prosperity in work, fecundity for women, physical health for all, and peace among the population. At the end of the prayer, he sacrifices the lamb, letting some blood drop onto the stool and the rest into a bowl. Every object will then be covered with the sacrificed lamb’s blood.

This is the central and most sacred part of the ceremony. Everything converges on this moment – this renewed communion between all members of the community. Indeed, the invocations and sacrifices to the ancestors and the family divinities, to whom the first fruits and the blood of the victims are offered, beseech their presence. They aim to concentrate their good forces on the person of the king, and through him to pass them on to everyone. Ties of unity are reaffirmed and restored and everyone receives a supplement of life; the energy needed to confront the new year. Even sacred objects are reinvigorated and regenerated.

In the afternoon, the girls go from house to house dancing the noro. Dancing in a circle, they throw themselves into the arms of a companion and say the name of a lover, be he real or imaginary. The dance is a symbol of the flowering of life, the joy of living, prosperity, and abundant harvests. On the evening of the feast, everyone goes to the village chief’s courtyard to thank him for everything he does for his people.

PreviousBrazil: Over 3m in Child Labour
NextEcuador: “We are afraid that the earth will quake again”