Ecuador: “We are afraid that the earth will quake again” 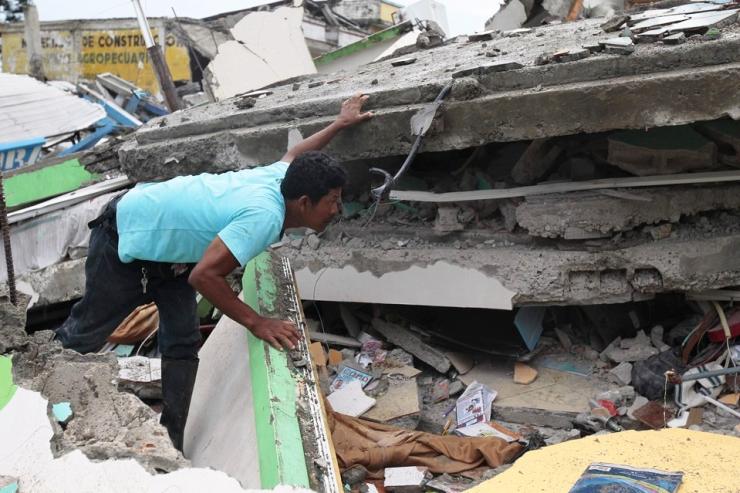 At least 587 people are now known to have died in the earthquake that struck the coast of Ecuador on Saturday 16th April. A religious sister and five postulants from the “Siervas del Hogar de la Madre” community in Playa Prieta are among the victims.

The streets of Portoviejo are steeped in the smell of decomposing bodies, and of smoke. People are begging desperately for water, food, and blankets. Nobody sleeps at home – not even those whose houses are still standing. “We are afraid that the earth will quake again,” a tearful a young missionary says.

The missionary continues: “It was two minutes before the start of the 7 o’clock Mass on Saturday [April 16], when the ground began to shake. The earthquake was very, very strong. Suddenly a large part of the roof fell. In a few seconds, fear, blood and cries had spread through the church. I could only pray and ask God that it would stop as soon as possible.” In the city, he says, “the bodies are beginning to decompose. We have no water, and the power is being continually cut off. Our country is not prepared for this”.

The lifeless bodies of Sister Clare Crocket, an Irish missionary who had been in Ecuador for 15 years, and of 5 postulants – Jazmina, María Augusta, Maira, Valeria, and Catalina – were found among the rubble. Helpers managed to rescue three other sisters of the community, who are alive and in hospital with severe wounds – Sister Estela Morales (Spain), Sister Merly (Ecuador), and Sister Thérèse Ryan (Ireland) – alongside two Ecuadorian postulants: Guadalupe and Mercedes.

The Siervas del Hogar de la Madre run a school on the coast which, according to locals reporting from the scene, was completely destroyed by the earthquake.

In light of the earthquake, the Bishops of Ecuador have offered a word of faith in the Lord to the Ecuadorian people. They wrote in a statement: “Our thoughts go especially to our brothers and sisters in the provinces of Manabi and Esmeraldas, who seem so far to be the most affected, and we invite everyone to participate in the national collection for the victims, in order to help them in their most urgent needs”.

Caritas-Ecuador has received 4,068 requests for help from 23 provinces in the country, and even from Ipiales and Pasto, two cities in Colombia.

The Secretariat of the Civil Protection of the Government of Ecuador reported that the earthquake, which registered a magnitude of 7.8 on the Richter scale, was the strongest since 1979. 6 provinces on the Pacific coast were declared emergency zones: Esmeraldas, Los Ríos, Manabí, Santa Elena, Guayas, and Santo Domingo.

PreviousIvory Coast: The Yam Festival
NextEurope’s Bishops: “Lesbos as an example of hospitality towards migrants”