Peru: Earth Interwoven in the Soul 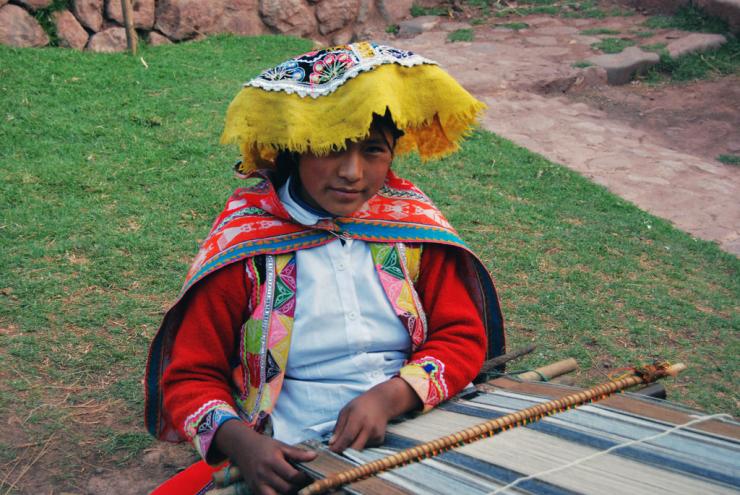 The rich textile tradition in Peru has created a time-honoured dialogue between the land and its inhabitants, which has played out like the strains of an unusual symphony. Every small town has its own unique cloak. Every community has its homespun cloth, and every culture its own breath-taking legacy. Each piece of fabric is imbued with the spirit and history of its birthplace. As we travel through Peruvian time, space, and history, we discover more than a tradition; we discover an entire universe.

The young girls of the Sun used to weave luxurious vicuña fibres into garments for the lords of ancient times. Moche warriors, Chavín priests, great Chimù chiefs, Chincha marines, and Inca nobles were striking in their splendid clothing – in life and death. Reeds were woven into pitchers, dipped into the life-giving waters of the rivers snaking across the desert. For five thousand years, these bulrushes supported the imposing walls and temples of Caral, the most ancient city of the Americas.

Ancient hands plaited ich, a yellowish straw, stalk by stalk into imposing bridges that stretch over the yawning abysses cutting through the Andes at 16,500 feet above sea level. The Q’eswaschaka Bridge is re-woven year after year in a ritual of communion and hope.

Early Peruvians were greatly skilled in the art of weaving the glowing plumage of Amazonia’s brilliant birds into their garments.

These feathers symbolised an offering of faith to their gods and respect for the commandments of Mother Earth, and comprised an essential part of their rituals and prayers. Cotton fields presented a vision of snowy furrows dug into the stony desert, reminding us that Peruvians have always planted their crops in the sand. They dye the cotton fibres before the plants even bloom. Gaucho wool, sheep wool, and alpaca fibres are used with the freedom of the artist.

Peru has as many weavers as it has dancers; colours; iconographies; and ethnic groups. Weaving tells stories: beseeching mountain spirits to fill rivers with water, extolling the virtues of lords, and venerating gods; it decorates and warms the people, and adorns those leaving this life and journeying to the next world. It links to eternity. Abstract and surprisingly modern geometric shapes, plant and animal figures, deities, humans, and elements of our rich nature are woven into the fabric of time. Textiles have played many different roles: social, economic, ritual, funerary, and religious.

The art of the masters has clothed priests for ceremonies, served as currency for taxes and trade, distinguished dignitaries, identified provinces, rewarded victorious warriors, and shrouded the dead.

Textiles are undoubtedly the most significant part of the magnificent inheritance left by the Peruvian forebears, which also includes metalworking, pottery, hydraulic engineering, astronomy, and agriculture. Many treasures still lie silently below our feet, yet to be uncovered by archaeologists.

When Spanish conquistadors landed on our shores, they were amazed to find Inca storehouses stuffed with incredible weavings, made of feathers plucked from the many birds that flew over the vastness of Tahuantinsuyo – the Inca Empire.

Textiles were the most valuable treasures of Tahuantinsuyo: chronicles note that there were special officials in charge of weaving robes and cloaks for the Inca ruler. Acllas, virgins, produced the impressive vestments worn only by him. The nobility wore cumbi, a luxuriant fabric made mostly of vicuña wool, renowned for its softness and bright cinnamon colour. The Inca Empire, however, was not the most representative moment of Peruvian textile production. Weaving traditions stretch back five thousand years. Paracas and his burial wrapping, Chancay with his translucent gauze, and Wari with his complex design are among the incredible artistic examples from Peru’s history of weaving.

This tradition is part of living culture: expressions are reinvented and new forms are adopted without losing sight of the heritage, wisdom, and beauty of the original technique and designs. Men, women, the elderly, and children spin, weave, plait, and embroider. Young girls tell secrets, with delicate shawls gracefully draping their shoulders as they work in the field, while married men reveal their status with belts lovingly woven by their wives.

The Wayruros play football in their bright red ponchos, and mothers do their Sunday shopping in the Andahuaylas market, dressed in skirts, vests, and hats as colourful as the potatoes and fruits native to this Andean land.

During Mamacha Candelaria festivities, the women of Juliaca dance joyfully, wearing tulle stoles and ribbons with flowers and butterflies. Coastal fishermen weave the future into their cotton nets before heading out for the catch, just as the first inhabitants of these shores did.

Descendants of the Moche still weave reeds into quick and agile boats ready for sail. And let’s not forget Amazonia – that other world where Awajub, Shipibo-Conibo, and other people, hidden in the dense jungles, weave and sing; dyeing reeds and cotton with natural dyes. The women carry baskets, and the men wear bands woven with feathers and worn like crowns. The female weavers of San Ignacio de Loyola spin while they pasture their flocks and chat among themselves; they spin and flirt, and spin and laugh. They spin and live.

Girls, young women, mothers, and older women never stop spinning their spindles, which dance to the rhythm of Paruro as they twist the sheep-wool fibres. In the north, in the south, on the coast, in the mountains and in the jungles textiles are woven into everyday life. The products of this craft become beautiful objects of devotion. Weaving is as natural as breathing.

PreviousTanzania: The God of our Ancestors
NextThe Pope in the Caucasus Region: Messenger of Dialogue and Peace