The Pope in the Caucasus Region: Messenger of Dialogue and Peace 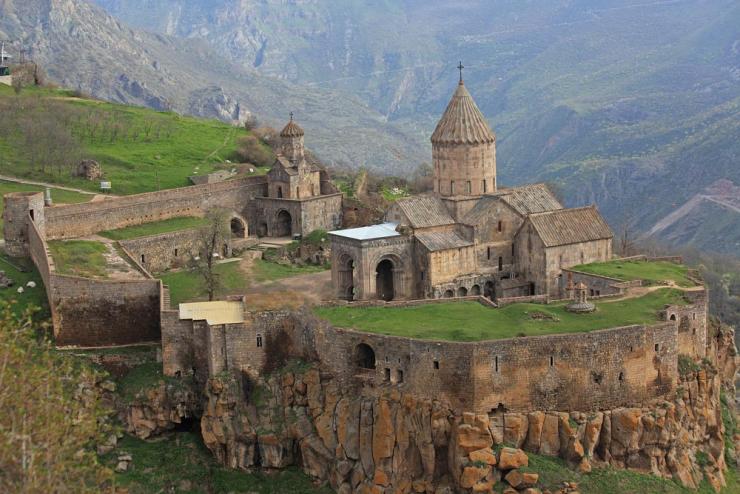 Pope Francis will make two trips to the Caucasus region in the coming months. He will be in Armenia June 24-26, and in Georgia and Azerbaijan from 30 September – 2 October. Bishops Raphael Minassian and Giuseppe Pasotto have described the atmosphere in these countries, where Catholics are a small minority.

The Caucasus region is a borderland between the East and West, where Catholics are a small minority and where dialogue is a necessity – an imperative, even. The Pope will make two trips to the Caucasus region this year, in June and at the end of September/beginning of October. Monsignor Raphael Minassian, Ordinary for Catholic Armenians of Eastern Europe, described the reaction to the news of the Pope’s visit to Armenia: “The people, the faithful, the community – the population is looking forward to meeting His Holiness with feelings of joy and anticipation”.

Bishop Minassian began by mentioning the tensions that sparked off at the beginning of the month in the Republic of Nagorno-Karabakh, a disputed region between Armenia and Azerbaijan and an extremely unstable area. The recent clashes have reminded people in the region of 1994, when a ceasefire document was signed – putting an end to a conflict that claimed over 30,000 lives and produced a million refugees. Bishop Minassian said: “We hope that this difficult situation will be overcome”.

The Pope’s trip to Armenia was planned under the ecumenical banner of friendship and affection between Francis and Karekin II, Supreme Patriarch and Catholicos of All Armenians. The Holy Father will make visits accompanied by the Catholicos, and will be his guest at the Catholicate.

There are 160,000 Catholics in Armenia. The highlight of the papal visit will be the Mass on June 25th in Gumri, Armenia’s second largest city, where the majority of the Catholic community lives. The Bishop said: “The visit of Pope Francis is a blessing and an encouragement.”

The entire population is looking forward to the Pope’s visit. They are keen to express their appreciation to the Holy Father for having publicly recognised the twentieth-century Armenian genocide in 2015. According to the Bishop, “It’s a right that had been denied for a hundred years, which the Holy Father has given relevance to. We are grateful for this.”

The Pope will be a “messenger of dialogue and peace” in Georgia and Azerbaijan. Azerbaijan, which was visited by John Paul II in 2002, has a Muslim majority: 62% of inhabitants are Shiite Muslims, 26% Sunni, and 12% are linked to the Orthodox Patriarchate of Moscow. In Georgia, a country with an Orthodox majority, the Catholic presence is more expansive with 50,000 faithful. “Hence these two States are characterised by entirely different situations,” the Bishop points out. “However, in both Countries Catholics are a minority and the Catholic Church lives in close contact with majority religions and confessions. The Pope’s visit to these lands is particularly significant for at least two reasons. First of all, the Pope will be visiting two Countries [Armenia and Azerbaijan] in a state of conflict, and it is to be hoped that the Nagorno-Karabash ceasefire agreement will continue to be respected. The Papal visit is significant also because Francis will be visiting a region of the Caucasus where, even though Catholic communities are numerically small, they have a great value, as relationships are established within diverse situations in line with what the Pope has indicated from the start.”

PreviousPeru: Earth Interwoven in the Soul
NextPope Francis to Teens: “Love is the Christian identity card”