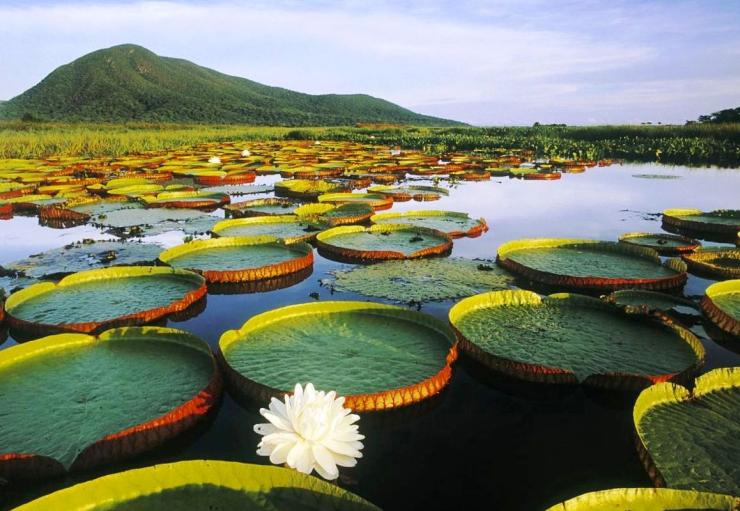 The marambiré is one of the most authentic African rituals in all of Amazonia. Its rhythm is similar to that of the candomblè, whose costumes, musical instruments, coloured ribbons and rhythm are reminiscent of an African heritage.

The rite goes back to the time of slavery. It has been celebrated for almost two centuries and is one of the most popular feasts of the municipality of Alenquer, in Parà State in the heart of Amazonia.

The marambiré is a sacred rite that is fascinating, dynamic, lively, enchanting, seductive, and full of evolving elements. It is marvellous in its human and divine creative imagination and in its mystical power over nature. It is a great emblem of the resistance, the cultural life, and the desire for freedom of the people of Amazonia.

The rite is a celebration of fraternity and a great expression of the history of the black community, including the history of the methods of production common in Africa (horticulture), and the memory of their ancestors – taken from their country, chained up, and thrown into the holds of ships to be sold into slavery. Many died during the crossings, and their bodies were thrown into the Atlantic Ocean. This is why the feast of the marambiré concludes its cycle with a procession along the river where, to the sound of music, the people place thousands of colourful flowers. It is believed that the waters of the sea and the river are sacred, as they constitute the cemeteries of relatives and friends.

The marambiré is the deepest expression of syncretism among the traditions coming from the African continent, especially the Congo, Angola, and Mozambique, and of the mythology of the Amazonian flora and fauna. It is now part of the historical, cultural, social, political, philosophical, and religious heritage of the municipality of Alenquer and of the whole of Latin America.

In the marambiré ritual, dancing is of considerable importance – a dancing mime with well-defined rhythms. The dance is inspired by the coronation of kings which the slaves used to elected in certain periods.

Following the oral tradition of ancient beliefs and customs, the marambiré players do not take part in the dance. Instead, they accompany an exuberant choreography which produces a spectacle of rare beauty and imagination. As people dance in a circle, all the strength and flexibility of their bodies is visible.

The marambiré is majestic and solemn; as they perform the steps, the dancers exhibit a wealth of movements. The songs consist of short phrases, simple and enchanting; a mixture of African languages and Portuguese.

Those who take part in the marambiré dance go out onto the roads in lines and circles, dancing in the squares and courtyards of private houses. But strictly speaking, tradition requires that the dance take place only at the houses of descendants of slaves up to the fifth generation. In fact, the dancers must be directly related to the third degree. The dancing group is composed of eighteen first-born men and seven married women, called contra-mestre. The musicians also number seven, apart from the King and Queen of the Congo, who are considered as one – “a single and absolute being”. The Queen of the Congo is the most important person in the dance. Dressed very discreetly, she receives the expressions of respect and affection offered by her “subjects”. To the sound of drums, tamborins (tambourines), atabaques, violins and pandeiros, the lwulum or ludum (similar to the carimbò and the marabaixo) is then performed.

The Queen of the Congo then dances with such vigour that it grips those present. She launches a subtle and knowing challenge to the men present by exhibiting versatile and attractive steps. The dancing involves the whole group and the audience. Those flattered by the crown of the King or the Queen cannot turn down the invitation: their Majesties are sacred people worthy of respect and must not be disappointed. It is a song of sorrow and lament, but also a song of joy and of the hope to live free like the birds. The marambiré is not only folklore but a key event for a homogeneous and unified culture, celebrating the wisdom and the struggle of the black communities of Amazonia.

PreviousDemocratic Republic of the Congo: Upcoming Elections
NextPope Francis: “Missionaries are the ‘evangelization heroes’ of our times”