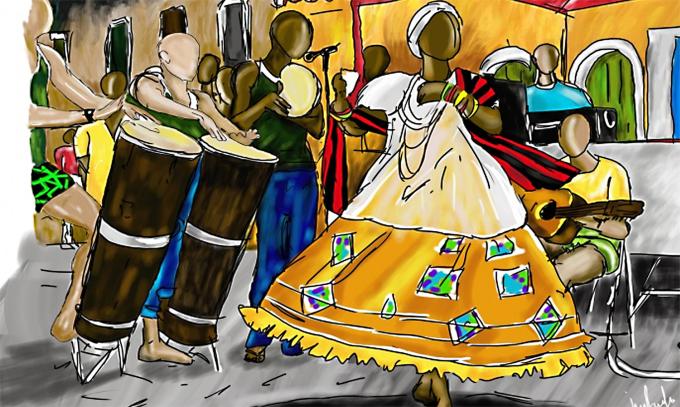 The slaves who arrived in Brazil from Africa long ago were hardly put to the test by the labour they were forced to endure. As a people, they resisted thanks to the strength of their tradition and culture, which neither forced labour nor the distance from their homeland was able to erase. In the new land, their cultural identity merged with a new way of life. As time went by, some traditions gained a “popular” dimension. The jongo, an ancient dance, was practised less – but it is not yet defunct.

Associations and groups of Brazilian artists have begun to reconsider this expression of ancient traditions, in order to keep Brazilian folklore alive. Immaculada Lopez describes the beginning of a “jongo night” in the Tamandarè community on the outskirts of Sao Paulo: “In Tìa Frida’s house there is an incredible stream of people. In the main hall, the recitation of the rosary and of litanies begins. Outside, the preparations continue, ceaselessly. The whole road celebrates. It is time to light the fires in order to warm up and tighten the drum skins. Everyone is waiting for the jongo to begin at midnight.

“Gathered around the fire, the eldest jongueiros greet the drums and the ancestors. The first verses are sung: they will continue until the first sunrays let the new day in. They are brief verses sung by the jongueiro, and the others answer in chorus. Some verses are from the slavery period, others are impromptu. To drum music, the couples line up at the centre of the group, dancing and swinging. Suddenly the jongueiro stops and cries “cachuera”, and the music ends. This way, a new verse of the song begins; full of metaphors that often only another jongueiro can understand.”

Mazè, a dancer, explains: “At the time of the senzalas (the shacks where slaves lived), slaves used jongo to express emotions and feelings that only they could understand”.

Jongo, sometimes also called caxambu after the drum (the main musical instrument used), is not only a dance but the instrument of an ancient oral tradition in which mysticism, popular culture, the people’s resistance, and play intertwine.

As explained by Brazilian historian Josè Bittencourt, jongo is not a musical style but a dance. Nonetheless, music and dance are inseparable. The music has a quick, syncopated rhythm, created by only one percussion instrument – the caxambu. This is sometimes accompanied by a more resounding drum, the candongueiro.

The dance involves couples in the middle of a ring. The man dances around the woman, who moves rhythmically on the spot. It is, in a certain sense, a courting dance. Even if it has an element of sensuality, this dance is far chaster than other African-inspired dances; the bodies just graze each other.

Bittencourt also explains that through their adaptation process, African dances have undergone changes little by little. Jongo enjoyed a great development in a region known as the Vale de Paraìba, which encompasses areas of the current districts of Sao Paulo, Rio de Janeiro, Minas Gerais and Espirito Santo.

The dance passed from the senzalas of the coffee plantations to the black slaves’ communities on the outskirts of Brazilian cities. It is from these communities that jongo, at first used only in private and intimate moments within the community, began to spread and to take on a public nature, leading to the birth of the other typical Brazilian dance – the samba.

The two traditional dances (samba is commonly called samba de roda or samba de corro) share many common features: the couples dance in the centre of a ring, following a clear musical rhythm played mainly by percussions. There also is a leading singer, who sings a verse which is then repeated by the choir. Lyrics were conveyed by word of mouth.

With the appearance of samba schools in the twenties and the great popularisation of the carnival, the scenery changed. Records began to be recorded and melodies to be written; samba, once a dance popular in more deprived neighbourhoods, began to spread among the middle class.

Thus, because the music was influenced by other styles, it began to be more refined. New instruments and sounds were introduced. The quick and cheerful rhythm of the music, clearly African-style, began to be the foundation of everything. Jongo, however, stayed alive in small urban and rural communities which refused to lose contact with their roots.

In the last few years, there has been a widespread revival of interest for this ancient dance: the number of jongo dancers has increased and, also thanks to the internet, the dance itself has gained an international audience. Some aspects of the original dance have changed, but this ancient tradition is bound to survive.

PreviousThe Archbishop of Portoviejo, Ecuador: “Hospitality and Mercy” to Overcome Discouragement
NextKenya: Church Concern About The Closure of Refugee Camps