Ghana: The Dump of God 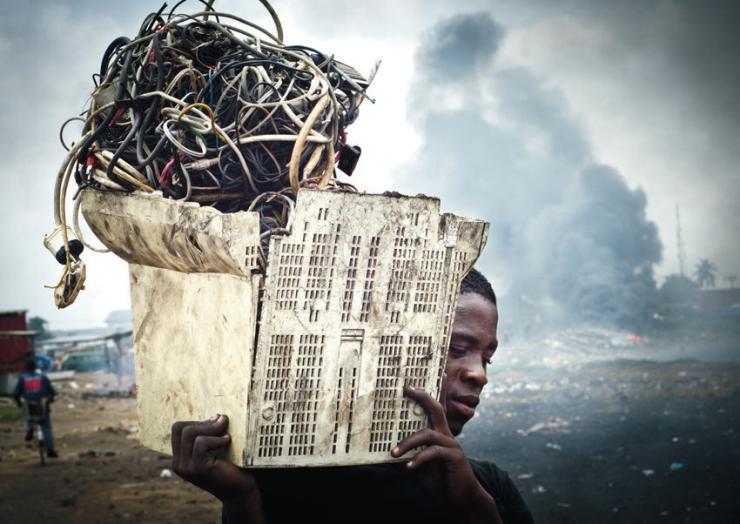 Agbobloshie is a large landfill on the outskirts of Accra, Ghana. It is often referred to as the ‘digital dumping ground’, where millions of tonnes of electronic waste (e-waste) from Europe and North America are processed each year. According to environmental organisations, this constitutes “one of the biggest environmental crimes the world has ever witnessed”. A small religious community, meanwhile, tries to bring hope and solidarity to the people living in the area.

The Agbobloshie landfill is located on the south-eastern outskirts of Accra. People have to cross a bridge linking the banks of a small river to reach the site. The river is black from the polluted environment; oil slicks and all types of waste float on its surface.

Agbobloshie has become the world’s largest dumping ground for electronic waste, the so-called WEEE (Waste from Electric and Electronic Equipment).

At the entrance of the dump, we meet 12-year-old Agyei: sweaty face, listless gaze, cuts on his hands, he does not really feel like talking. He hurries back to work and says in a low voice: “If I finish in time, I may bring seven dollars home today”.

As we go ahead, the air gets more and more acrid and unbreathable. The clay soil is no longer red earth; it has turned to black by now, as it is soaked with used oil, battery acid, and other poisons. Some children are lighting a fire. Nsoah, who is accompanying us, explains: “Kids aged between 12 and 14 are generally in charge of the fire, but some of them are no more than six”. One of them, Baako, who is about eight years old, says, “I pick up metal and bring it to my boss”. His face, his hands, and his worn out clothes are completely covered with the grey patina of smoke coming from the fire.

We stop at Baako’s “workshop”, where the boy is dismantling a refrigerator. He looks at us and says, “Welcome to Agbobloshie”. He adds: “Here, everything has a particular smell: there are dioxins in the air, lead and mercury in the water, and battery acid and exhausted oils in the ground”. Baako smiles and keeps on dismantling the old refrigerator.

The landfill is divided into sections. The first is the graveyard of refrigerators, which are meticulously dissected. Another section is for electrical materials; and then there is the computer and television waste section.

There are thousands of people working to dissect the waste for any reusable parts, to be recycled and resold. The most valuable materials are copper, steel, and iron; plastic, glass, and everything that has no value is left on the ground. It is shocking to notice that there is no kind of self-protection equipment. Only a few lucky ones wear a pair of gloves or goggles. Boys and girls work in the dump, touching contaminated metals with bare hands and inhaling poisons. According to Nsoah, many of them are “the only source of economic support for their families”.

E-waste arrives in Agbobloshie mostly from Europe and North America. According to environmental groups, the amount of discarded electronic materials ranges from 20 to 50 million tonnes every year. 70% of this waste ends up in West Africa, in countries such as Ghana, Nigeria, and the Ivory Coast. There are international laws banning the export of computer waste, but traffickers are getting around them by labelling the shipments “usable second-hand goods”, says Donkon, a port worker. “But about 90% of the computers are just junk. They just don’t work”, he explains.

Behind the landfill there is a slum, which is home to 60,000 people. Its name is emblematic: “Sodom and Gomorrah”. But even in a place like this, things can change. In 2004, an Italian Capuchin friar, Brother Arcadio Sicher, created a small mission called “City of God”.

Subash, a 55-year-old Indian priest, is currently in charge of the project. He has lived in the slum since 2012. The mission community is still small, but it carries out many activities. Schooling is considered particularly important. Father Subash says: “Lessons are organised by turns: children attend classes in the morning, after-school activities are in the afternoon, and adults, who work in the landfill during the day, attend classes in the evening. School is a chance to meet people of different ethnicities, which are sometimes in opposition to one another. Christians and Muslims study together, get to know each other and become friends”. According to Father Subash, “the school makes the entire community feel the importance of education – and in particular, it is a place where grammar school children can carry on their studies”.

The centre is an important reference point for women and children. For some years now, training courses have been organised to teach girls how to create jewellery and ornaments with beads. Father Subash says: “We intend to start a hairdressing and hairstyle course for girls, in order to provide them with future job opportunities”.

In the slums the main construction materials are plastic and wood. The school is one of the few buildings made of bricks. The City of God received a donated portable water pump, as there are often short circuits which then cause fires. As a result, the Capuchins of the mission have organised training courses for volunteer firefighters, who have already stepped into action multiple times.

Healthcare is another problem faced in the slums. Father Subash says: “We have started a programme on health information and training. We organise meetings with medical staff and promote health insurance”. This year, with the help of some volunteer nurses, the centre has started to offer medical care once a week. Everyone can receive basic care and get health status information. People also learn to rely on the medical staff and the health system. According to Father Subash, “the goal is providing health service also on other days of the week, and involving more volunteers”.

A bit at a time, things can change even in a place like “Sodom and Gomorrah” – also through the choice of words. This is reflected in the name the people now use for this place. Having realised that the name “Sodom and Gomorrah” does not evoke anything good, they have started to call the slum the “City of God”.

PreviousMongolia: A Small Yet Vital Church
NextThe Cunama in Eritrea: “Getting Out”