The Cunama in Eritrea: “Getting Out” 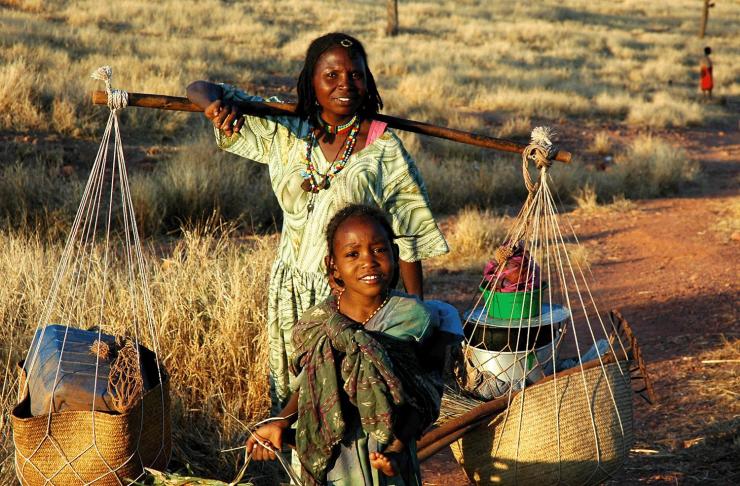 The Cunama, also known as the Baza, are a small ethnic group considered the most ancient of Eritrea’s inhabitants. They now number around 120,000 in Eritrea (roughly 2% of the total population), 15,000 in Sudan, and 5,000 in Ethiopia. The life of the Cunama, from birth to old age and even after death, is a tapestry of traditional rites and ceremonies handed down from the ancient fathers (ande) and observed scrupulously.

The first of these rites is the celebration of the Isata Olà, (“getting out”): the purification of the mother after childbirth (dagosa) and the washing of the newborn (deda niarca). This rite inserts the newborn into the Cunama tribe; it is like an enrolment recognising the child as a citizen among its people.

Once those children that don’t undergo the rite become adults, however long they live among the people, they will always be excluded from tribal life and considered foreigners. They lose their rights and are not allowed to perform the other rites during their life, including celebrating a ritual marriage or being buried in the shared cemetery.

The Isata Olà rite is the gateway to Cunama life, even if it means “the way out”. After the newborn emerges from the womb, through this rite it will get out of its nest, continuing into family life.

It’s not important whether the mother is legally married or not, or whether the child is male or female; it is a living being coming from the family – the cell where the tribe grows and multiplies. Not performing the rite triggers the fear that the spirits, or more precisely the souls of the ancestors, may exact revenge on the newborn, suffocating it, making it blind, or causing some other horrible misfortune. One has to follow traditions.

When the time comes for a woman to give birth, she can only leave her house after carrying out the prescribed rite. For personal needs, she can leave the house by a small door, avoiding looking at or meeting other people. When she leaves the house, she has to use the arkubà (camel) stick made of asabà or aitarà (types of tree), tied together with doum palm leaves (laca).

For some days, the mother will not be given solid food but thin aifa: diluted and cooked flour. After birth, the umbilical cord still attached to the baby will be anointed with a paste made of oil, butter, and ashes. When it falls off, the mother will have a ritual bracelet of doum palma leaves (laca furda) tied to her wrist.

On the second or fourth day following this, the mother removes the bracelet and carries out the other ritual ceremonies. The piece of umbilical cord won’t be thrown away – just like the lock of hair, which will be kept in a small container.

The mother, father, maternal aunt, and other relatives and friends will all participate in the Isata Olà rite at the prescribed time. It is usually the newborn’s mother who carries out the rituals. First up is leaving the house: the mother, her head covered with a white veil, together with the baby and the celebrant, comes to the entrance of the house. Outside, people sprinkle the women and children with water as a sign of purification. This water has been fetched from the village river the same morning by the maternal aunt, who was awake well before anyone else. Everyone eventually emerges from the house, and the mother sits down on a mat on the ground, while the relatives sit on stools in a circle to witness the completion of the ritual.

The celebrant carries out a similar rite with the child, dipping its head and then its bottom into the ritual water. The necklaces are then placed around the necks of the mother and the newborn child, and the celebrant marks their foreheads, eyelashes, and eyebrows with black powder.

Choosing the child’s name is an important part of the ritual. The name is, in general, associated with the time of the year during which the child was born. A child born in the rainy season will be called Galla, meaning rain. The name Sena (“grass”) is given to those who are born when the field is being cleared of grass. Those born during the harvesting of dura are called Kini. Unfortunately, war and its consequences are also remembered in names: One born when the country or area is devastated by war will be called Masi from masa (“wages war”); and the female name Agiagi comes from agia (“flight”) or matuda (“one who flees”) – given if the birth takes places when people are forced to flee or move.

When the participants have conferred the name on the baby, the mother offers everyone aifa (Cunama beer). The celebrant, with the baby in her arms, uses a conical filter, lacagià, to pour some of the beer that will be used for the rite’s concluding toast onto the mother’s head.

Two or four days later, the mother’s hair is newly styled as she prepares for the second part of the Isata Olà. The ceremony is called Bia co-ghira (“fetching water”) because when the rite is over, the mother is declared free to leave the house and go to the river to fetch water. The woman puts the wooden carrier on her shoulders with the balancing ropes (assuma) to which the two containers are attached: one carries water, the other some lit coals on terracotta fragments. When she is at a certain distance from the house, the celebrant crushes the coals and prepares a paste with which she traces a cross on the mother’s breast, back, hands, and feet. The mother then washes her hands and feet in the water remaining in the container.

This concludes Isata Olà. The mother is now free to leave the house and take up her daily tasks. When the child grows up, he or she will undergo other traditional rites.