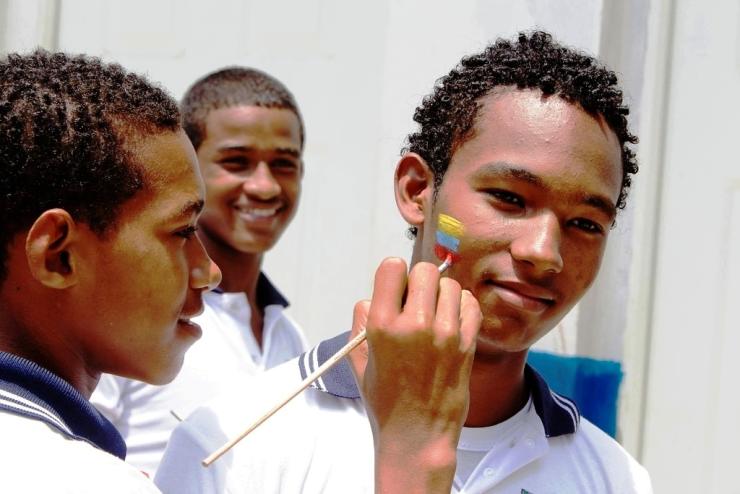 On the outskirts of Bogotá, Comboni Missionaries are committed to supporting the dignity and strength of Afro-Colombian communities.

The Afro-Colombian people of Bogotá live in the suburbs of the city. Most men from these communities work in the construction and security sectors, while women generally work as housemaids in private residences. They have all moved to the capital city in search of better job opportunities and economic security. But they face a society that requires specific work skills, which are often different from those required in their countries of origin. The Afro-Colombian people’s chances for a better job can also be affected by the quality of the education they have received: in some cases, their education is incomplete for various reasons; for others, their education is of limited use because they have lost their cultural and social references.

In Bogotá, as in many other cities, there are men and women of all ages, races, and cultures who have embraced the call of God and are committed to making the dream of God come true where it is needed most. The Afro-Colombian Collective Education Initiative (IECA) was created for this purpose. Men, women, priests, nuns, lay people, and members of the Afro-Colombian communities in Bogotá participate in the initiative, which is aimed at improving the lives of Afro-Colombians through education and a variety of concrete projects. The initiative will help Afro-Colombians be the architects of their own history, drawing on their own culture and spirituality, and on the gifts they have received.

Courses are being organised to have primary and secondary school qualifications recognised, in order to provide tools for the development of communities and the improvement of the standard of education through an “ethno-education process” – providing education by starting from Afro-Colombian culture.

A team of teachers, committed to faith and solidarity, helps the people in these communities to rediscover their culture, and to act in accordance with improving the well-being of the entire community.

The aim of this educational process is not simply providing a good education standard, but also permitting individuals to grow: making them aware of their rights and of the importance of their own culture in the context of Colombian society. The goal of these courses is enabling members of the Afro-Colombian community to integrate into society, so that they can improve their quality of life and their skills both as individuals and as members of Afro-Colombian communities.

There is still a long way to go. The activists who support the initiative are learning from their own experiences and from those of the pioneers who previously tried to help these communities. Much remains to be done and learned. The obstacles encountered along the way have been overcome by the commitment of people who believe in this initiative – by the power of team work and faith.

The initiative is carried out and co-ordinated by IECA’s Central Group with the collaboration of the teacher team, which is in charge of the courses. Many groups of supporters also help to accomplish the goal, each according to their resources: religious institutions, education foundations, Afro-Colombian organisations, the Afro Pastoral Centre of Bogotá, and many others. But the Afro-Colombian people are those who play a key role in the project. They actively participate by attending the training courses and, in turn, they give their contribution by sharing their cultural knowledge and life experience with the others.

Although this initiative is not exclusively a Comboni one, it reflects Daniel Comboni’s dream: “Save Africa with Africa”. In Daniel Comboni’s day, Africa was considered the unknown continent; the warehouse of Europe; a wild territory; and its inhabitants were not even considered human beings, but merchandise.

Ancestors from Africa arrived in the American colonies as a result of the slave trade. Nowadays, many things have changed while others have not; and many African descendants still remain excluded from society. But now, the Afro-Colombian people do not want to remain invisible to society anymore. They are speaking out against the rights they have been denied. They have started to rediscover themselves and decided to build a new society, where men and women, no matter which race or culture they belong to, can live in dignity and contribute to the common good. The Afro-Colombian communities can draw on their culture, knowledge, heritage, values and their way of living life to achieve this.

PreviousEl Niño: A New Threat to Africa
NextGuinea-Bissau: The Sacrifice of the Rooster

Philippines: On the side of the underdog

Bangladesh: the mission of dialogue