The Papaya: A Gift of God 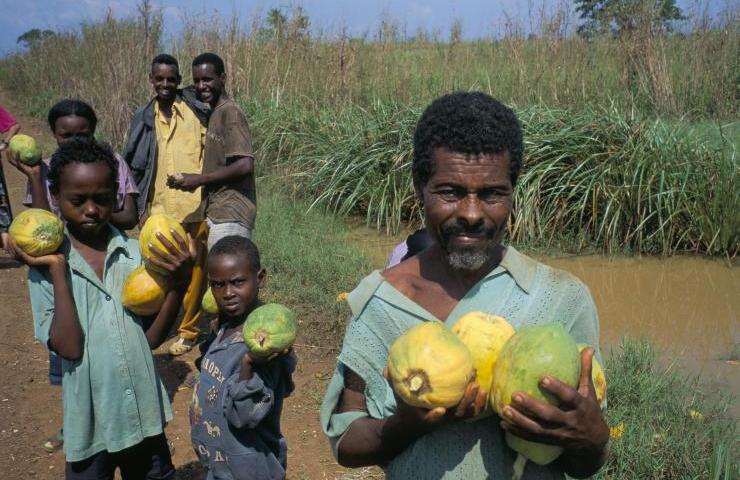 Sweet as honey and only slightly acidic; with a pulp that varies in tones ranging from intense yellow to orange, terracotta, salmon pink and fiery red; with a skin smooth and delicate to the touch: the papaya additionally bears powerful medicinal properties.

According to people from the Americas, God created a fruit that is the very light of the sun transformed into juice, pulp, and sweetness for the pleasure and health of humankind. There is no more exquisite taste to the palate than a slice of fresh papaya, when it melts in the mouth and slides down the throat.

In his infinite laboratory of wisdom, God made a fruit that is also a perfect natural medicine. The papaya has more vitamin C than an orange, large amounts of vitamin A, and a substance coursing through the plant that – because of its innumerable practical and medicinal uses – is almost miraculous. It is called papain.

The origin of the papaya tree is lost in the fog of history, but experts say that it was born on the sometimes sunny, sometimes rainy volcanic slopes of Central America – the area that today stretches from southern Mexico to Nicaragua. Thanks to the ease with which its seeds travel and the speed at which the plants produce fruit, the papaya spread through the warm mountains and valleys of South America. A thousand years before the arrival of the Spanish, the papaya tree was extensively cultivated and appreciated in Peru. Among the vestiges of the Chimù and Nazca cultures, mud vessels bearing representations of the papaya have been found.

The papaya tree was one species of American flora that astonished the Spanish – because of its ‘beauteous deformity’. That skinny stick of a tree, laden with enormous fruits and topped with a great crown of palm leaves, was spotted by the conquerors and chroniclers in mountains and rainforests and was found carefully cultivated near settlements or dwellings in indigenous villages.

The fruit of this tree had many names, such as chichioalxochitl (flower of the breasts); sarumaxi in the Rebona language; wati-oje in Coreguaje (Colombia); and kwar-kwat in the Kuna tongue (Panama). In the Dominican Republic, Puerto Rico, and Venezuela they call it lechosa; in Mexico, melon sapote or melon papaya; in Brazil, mamão.

The black, shiny seeds of Carica papaya have an extraordinary explosive vitality. Just a few weeks after making contact with warm, humid soil, two little palm leaves burst forth, seeking the sunlight. As the plant grows, it lets its first leaves fall, and in the place of each leaf, a knot remains. Every week it sheds two leaves, and some four months after planting, a flower grows on top of every leaf, and every flower yields a fruit. Under optimum conditions, 100 or more papayas can be cultivated in a year, and this extraordinary generosity can last four or five more years.

The papaya skin is smooth and delicate to the touch, like human skin, and its green colouring acquires yellow hues as the fruit matures. But to open a papaya is always a sensual surprise of colour and taste, because the pulp varies in tones that range from intense yellow to orange, terracotta to salmon pink and fiery red.

In taste, papayas can be sweet as honey, slightly acidic, or completely bland. Although the papaya tree grows well in all types of soil between 68°F and 82°F, the plant is very sensitive to subtle changes in heat, light, or humidity, and these subtleties are transferred to the fruit.

Nearly 150 years ago, some German chemists began to methodically study the papaya’s properties. The growing pharmaceutical industry had cast its eye on the abundant white milk produced by scratching the skin of the semi-green fruit. Other scientists in France, England, the United States, and Japan copied the German experiments, discovering that the milk contains a strong enzyme that can dissolve food as well as or even better than saliva, gastric juices, and pancreatic fluids in the human digestive system. If this newly extracted latex substance is applied to a little blood, it dissolves it as if by magic; mixed with lukewarm milk, it coagulates it instantaneously; and in just a few hours, it tenderises and disintegrates meat or any other tissue, and even corrodes metal. Now it is known that the fruit contains large quantities of vitamins A, E, and C, and that the papain found in the entire plant is a substance that has many uses because of its chemical affinity with the human body. The papaya is therefore a blessing when it comes to dealing with any type of problem involving the cleansing of the digestive system or the skin.

Thus the latex fluid that ‘bled’ from the green fruit became an important industrial and pharmaceutical business. In countries such as Sri Lanka, Tanzania, and Uganda, the green fruit is cultivated on large plantations, and industrialised countries transform it and sell it around the world. The latex, converted into white powder, is sent to laboratories in Europe and North America, where it is refined, transformed, bottled, patented, labelled, and sold in the form of remedies for gastric problems, powders to tenderise meat, lotions for the skin, industrial products to clarify beer and to soften leather and wool, and medicine for innumerable treatments that require dissolving hardened, diseased, or purulent membranes.

Nevertheless, in these industrial and pharmaceutical products sold all over the world, very little reference is made to the fruit they come from: the source of so many surprises. Isolated from the colourful pulp and converted by experts into a chemical ‘concept’, papain is removed from the awareness of average citizens, who don’t realise that they have within their reach the most complete natural medicine – in a fruit so exquisite and yet so ordinary as the papaya.

In the left nave of the Church of San Francisco in Quito, near the main altar, there are two retablos showing splendidly carved, gold-leafed platters of fruit that feature two enormous papayas. The dazzling Baroque era of the eighteenth century was one of the few times the Church allowed the soul of the Americas to be expressed in the art of its altars. Indigenous artists carved those gilded papayas, creating an homage to the land that has, through the centuries, quietly and freely handed down taste and sustenance, health and medicine, to generation upon generation of mortals who pass through this earth.

PreviousGuinea-Bissau: The Sacrifice of the Rooster
NextIvory Coast: A Home for Street Children