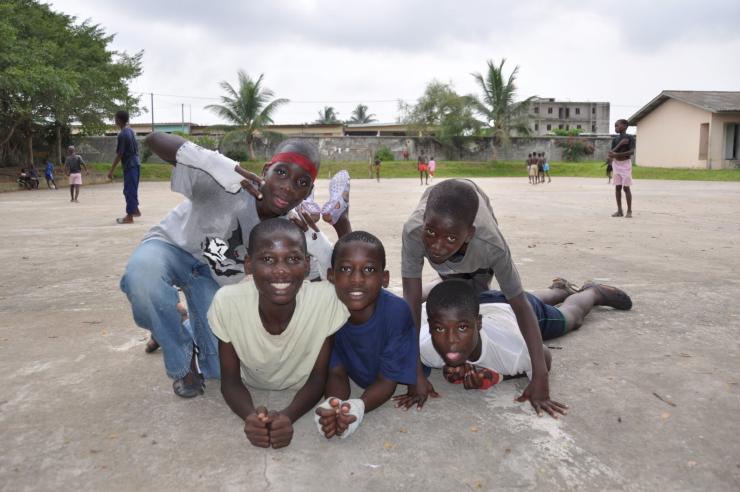 The streets of Abidjan, the largest city of Ivory Coast, are home to around 30,000 boys and girls. The De La Salle Christian Brothers are committed to providing them with a home and with dignity.

The Akwaba Home in Abidjan, which is run by the De La Salle Brothers, hosts and assists boys and girls between the ages of eight and 15 who used to live on the streets. Some of them arrived at the centre spontaneously; some others were taken there by the police or by other authorities. There are an estimated 30,000 children living on the streets of Abidjan at the moment.

The word akwaba means ‘welcome’ in the language of the Baoulé people. This word is basically a declaration of intentions. The Akwaba Home provides shelter, healthy food, medical care, sports, and education to the children who arrive there from the streets. The people of the Akwaba Home want to give dignity to the children, and they are first of all taught to take care of themselves, with a particular emphasis on personal hygiene and proper clothing. They also learn to tend to the garden and the house.

The ultimate goal of the Akwaba Home is returning the children to their families. During their stay at the centre, the children are provided with everything they may need, from food to education.

Josep Enric Seat, the Director of the Centre, said: “When a child arrives at the Akwaba Home we provide him [sic] with care, assistance and dignity. We, first of all, assist him with maintaining good personal hygiene, we give him food and clothes, and we help him to integrate with the other children at the centre. Soon after this first phase is completed, we try to get to know the circumstances that made the child end up on the street. We also try to get the necessary data in order to locate his family. Once the family is found, the staff of the centre starts to have an explorative dialogue with the child’s relatives in order to understand if the child can return to live with them. This process is seldom smooth. Sometimes children themselves make our researches difficult, by giving misleading information, or by jeopardising the meeting with their family. On the other hand, the families’ attitudes are often unclear, and our approach is often viewed with suspicion. It may also happen that the child’s family is not found. In this case we consider the possibility of placing the child in a foster family”.

Education is one of the priorities at the Akwaba Home. There is a ‘basic school’ at the centre, where pupils receive the essentials of an education. Classes are attended by the children hosted at the Akwaba Home and by students with learning difficulties from other schools in the city. The older boys and girls have the chance to become apprentices in sewing, carpentry, and plumbing factories as well as in automobile repair shops.

The Akwaba Home staff are also committed to developing a life plan with each child. This task is accomplished with the support of experts and by listening to the girls’ and boys’ requests. People working at the Centre also regularly look for street children in order to get them off the streets; but this is not an easy task. Children who live on the streets easily get used to drinking, smoking, and taking drugs, and though they are aware that they should quit these bad habits at the centre, it is not easy for them to do. Street children’s main concern is providing themselves with food – so they beg, or transport goods to shops and markets, carrying heavy loads in order to earn a few coins. Life on the streets is marked by violence and sexual abuse, with devastating consequences for the children. Violence and drug abuse are often interconnected, since the consumption of drugs causes serious behaviour disorders such as permanent aggressiveness, which results in gang fights or attacks against bystanders.

Josep Enric Seat said: “Our attempts to meet and talk to street children are aimed at helping them in their daily difficulties, listening to their problems, and taking care of them if they are not in good health conditions. When we realise that a child is sick, we take him [sic] to the hospital. And, of course, once we have gained the trust of the children we have met, we try to convince them to leave the streets and join the other children at the Akwaba Home or at other similar centres”.

“The Akwaba Home has turned out to be an active link of this extensive chain of solidarity that supports the minors of Abidjan, who live on the margin of society. We offer them the chance to reintegrate into their communities and be protagonists of their own development. We try to help them to overcome those difficulties that led to their marginalisation, and to lead the life every child deserves.”

PreviousThe Papaya: A Gift of God
NextReport Finds 46 Million People around the World in Modern Slavery