The Catholic Church in Mauritania 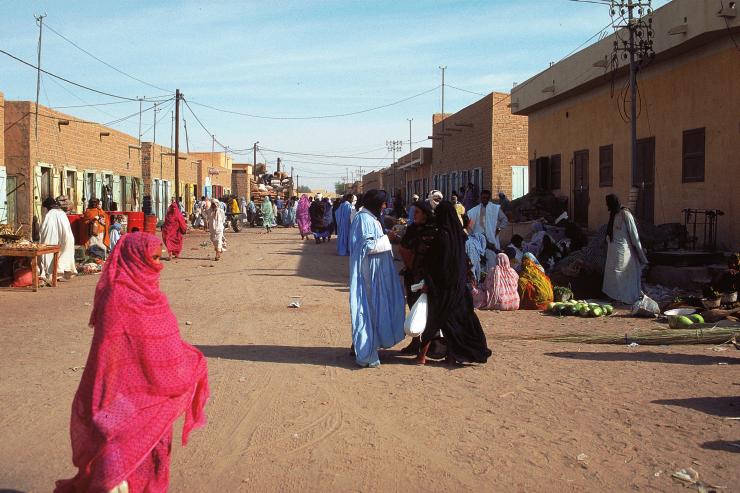 A small diocese, whose nuns and priests have endeared themselves to the local population with their social commitment and support.

In Mauritania, 99.5% of the 3.4 million inhabitants are Muslim. Catholics, mostly foreigners, represent just 0.1% of the country’s population. The number of non-immigrant Christians in the country is unknown. Conversions to any religion but Islam are strictly forbidden by law here. The Roman Catholic Diocese of Nouakchott, Mauritania’s only diocese, covers an area of 1.0307 million square kilometres. It was founded on 18 December 1965, five years after the end of the French protectorate rule and the proclamation of independence.

Over time, the Catholic Church has tried to carve out its own space in Mauritania. Monsignor Albert Martin Happe, who has been Bishop of Nouakchott since July 1995, says: “We want to represent the human face of Christ in a context where Christians are a tiny minority. It is difficult to quantify the number of Catholics in Mauritania. Besides Europeans, the majority of Catholics is made up of migrant workers from neighbouring countries – mainly from Guinea Bissau. Proselytism is forbidden in Mauritania. Muslims are banned from converting to other religions. The Catholic Church is not allowed to open Catholic schools, but only kindergartens, which are also attended by the children of Muslim parents who often regret not being allowed to continue to send their children to a Catholic school”.

Catholic Churches can be found all across the Mauritanian desert. The Zouerat and Nouadhibou missions are in the north, the Atar mission in central Mauritania, and the Kaedi and Red missions in the south; while the Nouakchott diocese is located in the capital. There are 12 priests and 34 nuns serving in the diocese.

Nouadhibou is the second-largest city in Mauritania and the country’s commercial hub. It is located in the north of the Cape Blanco peninsula, close to the border with Western Sahara and the sea. The work of the Catholic Church in Nouadhibou is an example of hospitality and support to migrants.

Justine and Aïcha are two little girls attending the Catholic kindergarten of Noudhibou. Justine is a Christian from Guinea-Bissau and Aïcha is Muslim. The two little friends learn and play together. At the end of the lessons, each goes back to her own home, but the next day they meet again at the kindergarten, and grow up together under the careful eyes of the nuns.

Another example: a mother happens to meet the kindergarten headmistress at the nearby beach and stays to talk to her about her daughter, and about life. This Muslim woman finds warmth and understanding in the Catholic religious’ words.

In the parish football field, children and young people play together from morning to evening. They come from different countries and belong to different ethnic groups and religions. Playing football together turns out be a real school of life for them.

The people serving in the parish are also well-known for their commitment in supporting African migrants who try to migrate to Europe. Every day hundreds of people arrive at the Catholic mission. They are people of different origins, social classes, and religions. The mission is abuzz with activities and voices speaking different languages, from morning to night. The people who arrive here know that they will find warm hospitality – whether they are Christians, Muslims, or belong to the different faiths practised in Mauritania, Guinea Bissau, Mali, or Niger. An Indian nun tells us: “We are here to give everyone serenity, and to try to make people feel at home, the home they have left to face an uncertain and dangerous future”.

The parish is not only a place of hospitality but also a training centre. Women participate with particular interest in the parish patisserie course. They do not want to perfect their pastries – they only want to make good cakes at home, to start their own business.

These training courses, along with other activities, are organised by the local Caritas. The person in charge of the local branch explains: “Caritas began to organise its activities on a voluntary basis by first bringing aid during the 1972 drought emergency, and we worked in collaboration with the Mauritania Red Crescent, providing immediate needs and assistance to people affected by drought. In the eighties we started to support development, especially in rural areas through micro-projects on water supply, nutrition, health and education. In the nineties, we were mainly involved in projects regarding childhood and youth training projects”.

Today, the Caritas in Mauritania has become one of the leading NGOs in the country. “A project we really care for is developing civil society representatives’ involvement in political dialogue. The last presidential election highlighted, in fact, the crucial role played by civil society”.

Bishop Happe underlines the Church’s commitment in the cultural field: “We organise cultural activities, promote libraries, and develop cultural centres, which are open to everyone. The Church wants to contribute to the intellectual rebirth of Mauritanian civilisation”.

The Mauritanian desert has been home to several great thinkers, especially in the field of Muslim religious sciences. Many academics settled down and established Quran universities in the city of Chinguetti, founded in the late thirteenth century. Many cultural and architectural treasures can be found in the area. Notable buildings include the Mosque, an ancient structure which dates back to the 13th century and features a well-preserved minaret. There are important libraries in the town, containing thousands of historic manuscripts. The Bishop says: “The Catholic Church, besides supporting the preservation of the country’s cultural heritage, is also committed to promoting cultural debates over these great cultural treasures, which are also the heritage of humanity”.

The Church, however, does not just look back to the past for the recovery of ancient culture, but also looks ahead, for example by organising computer courses in several parishes.

The Bishop explains why the Catholic Church is promoting cultural, sportive, and educational activities: “The Church wants to be a meeting point, open to everybody, to show God’s human face. Discriminations and prejudices cannot disappear overnight, but meeting and sharing interests or activities imply dialogue and communication. Mistrust and obstacles can be overcome by getting to know each other. Our task in Mauritania is creating a place of hope, where Christians and Muslims can have the opportunity to feel fulfilled people and live a meaningful life”.