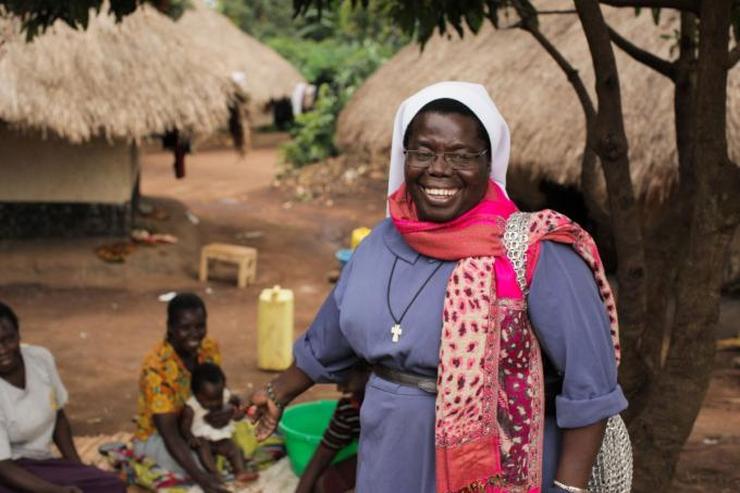 After their childhood have been marked by unspeakable cruelty, former child soldiers find hospitality at the school run by Sister Rosemary, where they learn a trade and learn to be loved.

Restoring dignity and confidence to former child soldiers is a difficult task, but Sister Rosemary Nyirumbe has no doubt that it is a challenge worth taking on. Girl soldiers are the innocent victims of Joseph Kony and the Lord’s Resistance Army (LRA), the notorious Ugandan rebel group that has terrorised the villages of northern Uganda for the past 25 years. They loot, commit massacres, and take captives, having already kidnapped about 30,000 boys and girls. The kidnapped children are subjected to military training and forced into using weapons and committing atrocities – even against their own families. Many girls are used as sex slaves and forced to become the “wives” of Kony and his men.

The war ended in 2007, but for former girl soldiers, it is far from over. They suffer traumas that continue to affect their lives and need support in their long journey to healing and reconciliation. Sister Rosemary is aware of this, and that is why she is determined to carry on training programmes at the school, which include courses of catering and ethnic cooking.

Sister Rosemary recalls: “In 2001, I went to Gulu to relaunch the tailoring school for girls. The School of Santa Monica was in a terrible state of neglect. The building was supposed to accommodate three hundred students, but only thirty were there at that time. I found out later that many girls had been kidnapped by Kony’s rebels. Former girl soldiers need to let their suffering come out and should share the suffering they went through with the people they trust, but they are scared of doing so.

“One day I asked Jewel, one of the girls, why she never looked other people in the eyes. ‘Because I feel my eyes burning,’ she answered. Her answer was not convincing. In the end, she decided to speak. She was kidnapped as a child, and had remained for nine years with the LRA rebels. She was exploited, trained to use weapons, and when she became commander she led raids in the villages and robbed people. She is scared that someone might recognise her – that is why she always looks down at the ground and not into the others’ faces. One day, after gaining her trust, I took her to the market, and little by little, Jewel started to get rid of her fears and let her feelings out.”

Jewel and the other former girl soldiers find courses difficult. They lack basic maths and science knowledge because they were unable to attend primary school during the war. Sister Rosemary has therefore adjusted the lessons to meet her students’ needs. She has left aside theoretical lessons and introduced practical courses such as cutting and sewing classes. The new method has worked, and Jewel has become the best seamstress in the class, while dozens of other girls have applied to attend courses at the school.

Even more girls arrived at the school after Sister Rosemary, in a radio message, addressed all girls who had escaped from the LRA rebels – urging them to attend courses, to learn a trade and become financially independent. She also encouraged single mothers and pregnant girls to attend classes. Her invitation has been enthusiastically accepted. Sister Rosemary charged a group of women with taking care of the children of single mothers while they are at school. The mothers were scared of leaving their children alone at home because somebody might harm or kill them to avenge the atrocities committed by their mothers – the former girl soldiers.

Efficiency and professionalism are not everything, however: human and spiritual formation are also important. Former girl soldiers do not like to talk about their past. Sister Rosemary is convinced that “these girls must be loved unconditionally, without judging them. We must listen to them and gain their trust, without talking about their past. They will speak about what they went through when they feel ready to. They carry horrible memories inside of them, too much to bear even for an adult. Some of them were raped in front of their parents before being kidnapped and taken to the forest. Some others, after being abducted, were sent back to their families and forced to kill their parents, brothers, sisters and relatives.

“Giving them unconditional love is fundamental. By feeling loved, girls will gradually accept even their children, who are the fruit of violence, and will get rid of feelings of hatred.”

As the girls gain confidence, they gradually start to say a few things, until the moment comes when they pour out their tormented stories and emotions like flooded rivers.

“Many of the girls I met learned to forgive their kidnappers, but not themselves. They still feel oppressed with a sense of guilt for the brutal acts that they were forced to commit to have their life spared. I always remind them that there is no sin that God cannot forgive; and I add, God has already forgiven you. The Father sent Jesus, who gave his life to make us free. Forgiveness is a long path. Former girl soldiers need much time to recover from the atrocities they suffered, and to cope with painful memories. It is up to us to accompany them in the long path of recovery, and support them when discouragement overwhelms their soul. Showing them our unconditional support will help them to restore dignity and peace to their minds and hearts. I do hope that by the time they have left the school, they will be able to forgive the others as God has forgiven them – and accept the others in the same way they have been accepted.”

Since attending the classes at Sister Rosemary’s school, many girls have been able to find a job. Some of them work in the kitchens of hotels, or are employed in other services. They are re-integrated into society.