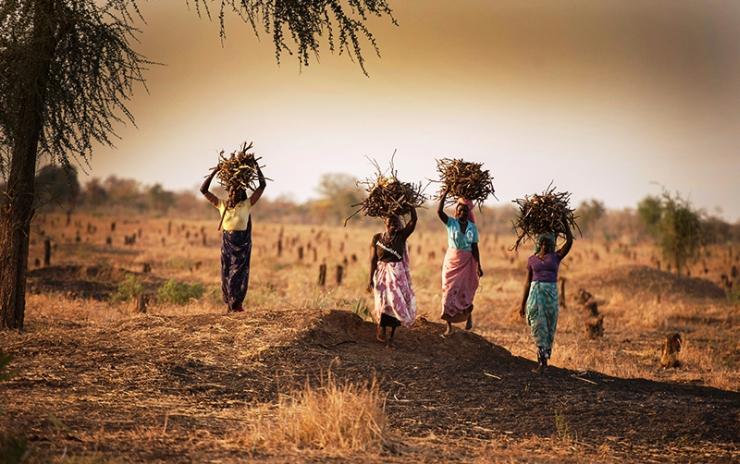 The Maban people are a Nilotic group of about 700,000 people. They live in 15,000 sq km in the Sudanese region of Malakal, near the Ethiopian border. This community makes its living working in the fields.

The Maban divide the year into two semesters, rather than 12 months. The rainy season lasts from April to September, during which one can become completely isolated for days because of torrential rains. During the other six months, the Maban arrange engagements and marriages.

During the rainy season, there is no time for distractions; dances and parties are forbidden. It is the planting season, and people devote themselves exclusively to working in the fields. A purification feast marks the end of the growing season and of the harvest. On this occasion, families sacrifice animals and thank God for the rains and the products of the land. This is the time when the young Maban people get engaged and wedding preparations begin. When girls have their first period, they consider themselves women and let everybody know they are ready to get married by the end of the year. These girls get privileged treatment from their families. Their closest relatives give them a dress as a gift, and from this moment on, family members keep a more watchful eye on them. The girls themselves begin to think seriously about who to choose as their future husband. Decisions about weddings are made in mid-November. This is the month of happiness and misfortunes, of dances and fights – because of the many contenders trying to conquer the girls’ hearts in every possible way.

Girls are expected to decide on a wedding date within the month of December. In the meantime they start to wash their clothes and get their multi-coloured beaded jewellery ready. When they have made their choice, they inform their “chosen one” secretly.

On the night of that same day, the lucky boy kidnaps his future spouse from her home and the couple takes shelter in one of the boyfriend’s relatives’ huts, who welcomes them warmly. The young couple will then stay in that hut for four months, as the girl is not supposed to leave the hut until the wedding is concluded. The night of the “marriage capture” is a troubled night for both families involved – brawls and quarrels could break out. On one side, the boyfriend’s brothers fight off the angry contenders and their friends, who will give them a hard time until the day the dowry is paid. On the other side, the girl’s family is busy looking for their daughter, to find out where the couple is hiding and whom she has chosen to marry. When they find the girl, they are angry with her and try to take her back home. The boyfriend’s relatives try to keep everybody away from the hut where the couple is staying. They are careful however, not to respond to provocation, because that would be insulting.

This “tug of war” lasts until the head of the family of the young man decides to pay the moya (the “water”). This is a sum of money offered to the girl’s family as a gift – to calm them down and to start dowry negotiations. When the two families have reached an agreement, the future spouses go through a process of “marriage formation”. They live together, learning to love and respect each other. The boyfriend can, from time to time, leave the hut to buy clothes and anything required for the wedding party. But he cannot eat and drink outside the hut. In the meantime, the boyfriend’s family tests the qualities of the future wife. They bring the girl a large amount of wheat, which she has to grind. This proves that she is willing to work and able to work hard, and that she can provide for her future family’s needs. The girl’s family, in turn, makes sure the young man treats their daughter well. If they notice any wrongdoing or lack of respect, they take their daughter away. They return their daughter to her boyfriend only after a family council has taken place and determined the terms of compensation owed by the boyfriend’s family. Elders of the girl’s family generally decide on the kind of compensation.

When the long-awaited day has finally arrived, everybody does their part for the wedding party to succeed. A hut is built for the girl outside the village, and a place under a tree is set up for the boy.

People provide the groom with some merissa (local beer) and tea, so that he can offer drinks to those who come to congratulate him on his wedding. The whole village celebrates the event. The couple’s families kill some animals and invite everybody to the banquet. Early in the morning the women of the village dance their way to the bride’s home. Each carries a flag that they offer the girl. Then, still dancing, they accompany the bride to the hut outside the village and cover her completely with a large cloth that also hides her face. The men, in turn, chat with the groom. In the evening, when everybody has eaten and drunk abundantly, the groom goes to the bride’s hut. They will spend their first wedding night there. It will be the only night they spend in that hut. From this moment, they are officially married.

Since everybody knows that all the wheat the groom’s family had stored for the rainy season has now been consumed during the wedding, and that they will not have anything left to eat in the months ahead, the women of the bride’s family take her back home to her mother the morning after the wedding day. If the husband wants to start living with his wife, he must show his skills. His wife’s family gives him some seeds, and they will then check whether he makes good use of them. If he passes the test, at the end of the rainy season when the grass has dried up he will have to build a brand new hut. Only then will he have proved that he can provide for his family’s needs and receive permission to live with his wife. From that moment on he will be considered a true Maban, with all his rights, privileges, and obligations.

PreviousThailand: The Christians of Chiang Mai
NextThe Catholic Church in Nepal: Committed to the Poor