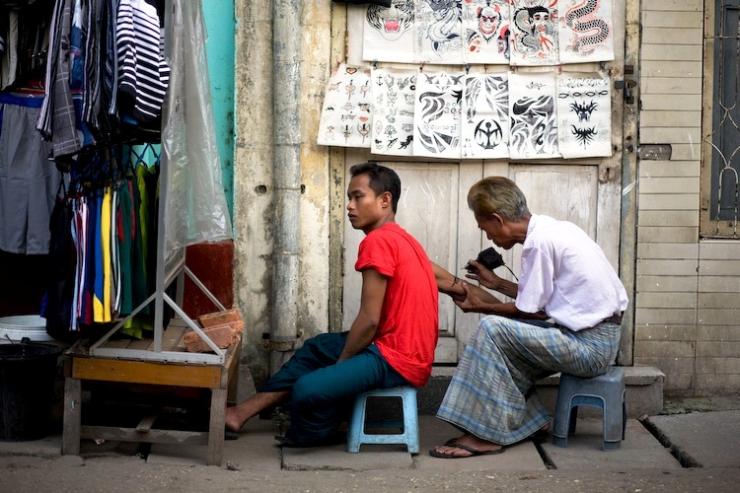 Throughout Burma’s history, the tattoo has been an important part of Burmese culture, occupying a space between art and mysticism.

An old Burmese saying goes: “Getting married, building a pagoda and getting a tattoo are the three things that once undertaken can only be altered afterwards with great difficulty”. Despite this, tattoos are once again fashionable with the people of Myanmar, from soldiers to schoolgirls, pop stars to successful sportspeople. Whether for cosmetic or religious reasons, to obtain mystical protection from evil spirits or simply a sense of belonging, the Burmese youth of today have embraced tattoo art, alongside other methods of body decoration like piercings.

Tattoos have traditionally had paradoxical connotations in Southeast Asia: simultaneously a sign of time spent in prison and membership of a gang or the sangha, the Buddhist monkhood. Although the word ‘tattoo’ is of Polynesian origin, many world cultures have discovered the art of tattooing independently. Tattoo culture has been found all over the world throughout history, from the Maori to the Maya, the Celts to the Egyptians, and the Japanese to the Vikings. Ancient Chinese records from the Qin dynasty (221-206 BC) indicate that men of the Lue and Yue tribes in the Mekong region were tattooed with demons and ‘water serpents’ in order to ward off evil spirits.

It was the Shan, a Tai ethnic group from Southeast Asia, that popularised the craft of tattooing in Burma, importing the practice from southern China. For the Shan people, tattoos had connotations of the magical and spiritual, and were seen as a sign of virility and maturity. As a result, young men were often tattooed from ankle to waist by the village medicine man, who used a long skewer to apply traditional indigo ink or natural vermillion to the skin. This procedure could take many weeks, and the subjects of this ritual were often drugged with opium to ease the pain. Animals, zodiac signs and geometric patterns were all popular tattoo designs in Shan communities.

Historically, tattoos were not confined to men. Women of the southern Chin clans tattooed their faces for more than a thousand years in order to discourage Burmese invaders. This practice is similar to that of the Padaung Karen, a Sino-Tibetan ethnic minority, who supposedly elongated the necks of young girls with brass rings to deter would-be kidnappers. For centuries, Burmese women inked ‘love spots’ between their eyes and lips in order to attract men. Other ancient practices of the Shan include inserting disks of gold and silver under the skin, which they believed helped prevent death in battle. Tattoos serve a similar purpose in Myanmar today, Karen soldiers often tattooing black tigers on their chests – a practice also common in the Thai Border Patrol Police.

The introduction of Theravada Buddhism to Myanmar had a profound effect on the symbolism of the art, and young Shan men now tend to choose Buddhist motifs for their tattoos. In Theravada, the body is divided into twelve parts. Hindu gods, Buddhist figures and sacred mantras are tattooed only on the back, arms and head. Tattoos on the ears, throat and shoulders are reserved for protective animals and mythological creatures. Those in the pubic area, often in the design of a gecko or peacock, are used to signify sexual prowess and an ankle tattoo was said to offer protection from snake bites.

The animist superstition of tattooing one’s body in order to protect against evil spirits is often seen as being in conflict with Buddhist principles. However, Theravada tattooing took its inspiration from the three spiritual planes that form the cornerstone of ancient tribal tattooing: pain, permanence and the loss of one’s life source – blood. This mystical trio elevated the tattoo from a mere art form into something that was believed to grant magical, protective powers and allow the formation of transcendent relationships with the gods.

The most common Buddhist artwork to feature in these tattoos is the Sak Yan, or Yantra, a physical expression of mantras. The script of these mantras are in ancient Pali and every line represents a tenet of Buddha’s teachings. The image itself is considered sacred and was a focus of worship and meditation. Many images included in the Sak Yan, such as the tiger and the lotus, are of Hindu origin.

These tattoos are religious rather than decorative, and many monks apply the tattoo using invisible ink.

Nowhere can the belief in the spiritual power of tattoos be witnessed more clearly than at the annual Wai Khru Festival at Wat Bang Phra – in Nakhon Pathom – some 30 km northwest of Bangkok. Thousands come every year to receive the blessing of monks, who apply Indian ink tattoos with traditional steel skewers and bless the devotees with the protection of animal spirits, most commonly that of a dragon, tiger or Hanuman, the monkey god in Hindu mythology. People form queues to receive these mystic tattoos, and the monks sit at small tables chanting softly as they work. Monks sketch concentric lines of Yantra onto the backs and shaved skulls of devotees, who repay the monks with incense, fruit, cigarettes and money. The tattooed subjects then leave, no doubt feeling that little bit safer, if not immortal.

PreviousUruguay: Mate, the Herb of Friendship
NextColombia: A Young Church Among Water, Forest, War, and Coca