Sudan: A Glass of Water for the Kafir 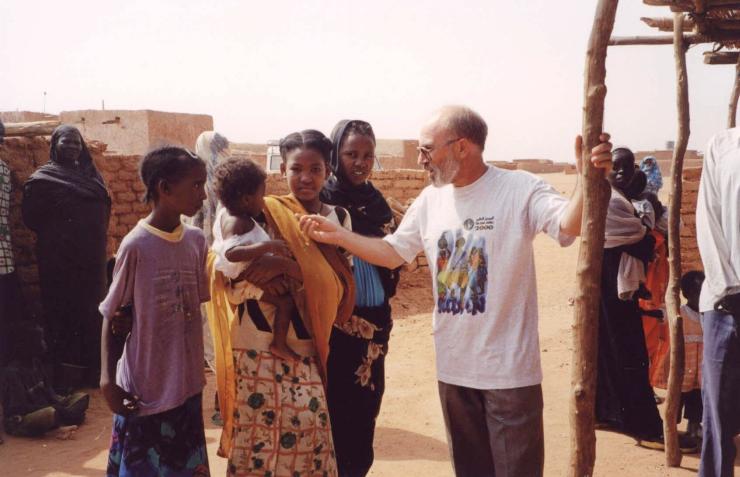 Just asking for a glass of water in a Darfur refugee camp became a source of fruitful dialogue between a Catholic and a Muslim. A Comboni Missionary who has been living in Darfur for twenty years tells us about his experience.

As has been happening every month for many years, this Friday the kids have left their villages to come to the church at the mission of Nyala. There are more than 200 of them. It seems that the security situation today makes them believe it will be a day without danger of attacks from the armed militia, Janjaweed.

The children have been arriving since the early hours of the morning. This day, known in the parish as Yom maftooh (full day), is dedicated to various religious, cultural and recreational activities in which children between five and ten years old are actors and spectators at the same time. It is one of the ways to sustain the Christian faith in Sudan, where the followers of Jesus make up just 5% of the population.

The Yom maftooh is always a great day for the kids, but also engages everyone in the parish – particularly the youth, who are in charge of preparing and running the various activities.

The first meeting of the day started as I was leaving. I was planning to visit an IDP (Internally Displaced Person) not far from Nyala. In less than a quarter of an hour, a Toyota combi, the city’s means of public transport, dropped me off a kilometre away from the IDP camp of Dreije, where about 80,000 people are currently trying to survive. There are more than one hundred camps scattered across the Darfur region – an area approximately the size of Spain in western Sudan.

The day was very hot and dry. Passing by the first store I came to, I asked for a bottle of water. “We sell only glasses of water”, the child on the other side of the counter said sheepishly. “Kafir (non-believer)”, I heard someone muttering. Although I didn’t see the person who uttered it, he wasn’t far from me. It was without doubt meant to be an insult, but I did not take it as such. I kept calm and took it in a playful way, looking around and asking: “Kafir? Where is he?” Immediately, a man appeared, getting out of the angareb – the typical Sudanese bedstead made of sisal ropes. After the usual assalamu alaikum greeting (Peace be with you), I told him politely that I had a correction to make: “I’m not a kafir; I believe in Allah (God) who loves us all equally. I pray and ask Allah to bless you and your household”.

The man behind the counter looked into my eyes while his bearded face acquired a severe and grave tone: “Remember, khawaja (foreigner), that if you had met another Muslim instead of me, you would have certainly been kicked out of the door. However, on my part, let me tell you what is essential and sacrosanct for us who follow the Islamic religion. Allah (God) sent Muhammad to this earth. It was through this distinguished Arabic messenger that the world has known or will one day embrace the majestic Islamic religion. Since then, it became clear that all other religions, those which came before and those that may come after, are not fit for the true worship of the Almighty and All-powerful”.

Here is a human being deeply convinced of his Islamic religion, whose words contrast with my Christian faith, I thought to myself. In spite of that, I didn’t perceive in that Muslim brother a proselytising or extremist attitude. I was not only inspired to show him my respect, but also to give thanks to God for the peace and serenity I was experiencing at that moment in that place. No doubt I was in front of a good-hearted man.

“I was forgetting”, he added while reaching for a large aluminium mug at the end of the counter, “we have no bottled water; I have a zeer (an earthenware pot), which keeps the water fresh – but I also have ice, because these summer days are very hot”. He disappeared, only to emerge after some seconds with the mug almost full of water, into which he dropped two pieces of ice. He then offered it to me.

“Shukran (thanks!)”, I said as I took the mug. Then he resumed the conversation: “In the khalwa (children’s Qur’anic school), we learn things which later, through life, when we find someone who is not a Muslim, we repeat too easily and without thinking – as that word you heard from my mouth earlier, Kafir”, he said in a sort of apology. I told him not to worry because I hadn’t taken it as an offence.

“By the way, I’m sorry! I haven’t yet introduced myself: my name is Abdallah; I am from Bulbul, a village some 60 km from here. There was no hunger there; it was enough to sow and till the land during the khareef (the rainy season), and we had food for the whole family – until one day, seven years ago, the Janjaweed came. They destroyed, killed, and burned everything. Two of my children disappeared in that bloody and diabolical attack”.

Abdallah paused briefly, trying to control his emotion. After a while he continued: “I imagined my children as fugitives and then wanderers looking for bread and security, hoping for the happy occasion to meet them again. After a few months, however, we had to surrender to the sad reality that they were of this world no longer. The pain is even greater when we can’t bury our deceased ones. We, the survivors of Bulbul, came slowly, camping here and there, until we reached the large IDP camps on the outskirts of Nyala city. In the beginning, I stayed with my family in Salam, but a year later I moved to this place, where I knew most people of my clan were living. Here, it is easier to get together – to remember and relive the past”.

“Is there a purpose in remembering sad things?”, I dared to interrupt. “Yes, there is – in remembering our dead and bringing to mind the destruction, the fires, and the plunder of all our assets”, he replied. “Do you think we should forget the women and girls whom the Janjaweed abused and shot soon after, leaving them in a pool of blood? Those who forget, no longer live; they are as good as dead. On the contrary, recalling it makes us live and gain new energy to fight for life”, he asserted boldly and firmly.

Abdallah continued: “Some of my displaced friends and neighbours, whom I came to know in these years, have already lost hope of returning to their villages of origin. As for me, I’m still not convinced that I am a displaced person, and I don’t like that label applied to me. It is true that Darfur has become, on the world map, a dark spot where there’s no security; but I hope that my story will not end here”.

The loudspeakers of the nearest mosque thundered. The proclamation of the azan, the call to prayer, majestically sung by the muezzin, tears the heavens and penetrates everywhere in the space around: “Allahu Akbar (God is great)”.

It is Friday. I see some men wearing the white jalabia walking towards the temple. From the shop’s interior, a woman appears with the ibreek (a small plastic watering can); she puts it on the bottom shelf and starts clearing the counter. She seems to be a very resourceful lady, full of energy. She is accompanied by a little boy whom she assists in putting on the sirwal (the white pants they use under the jalabia) and teaches how to tie the string/cord around his waist. The small shop is closing. It is the Muslim weekly holiday.

I notice that Abdallah, having rolled up the typical long sleeves of the jalabia to the shoulders, is now doing his ablution – that is, the ritual washing before prayer. He holds the ibreek in one hand and pours water on the curved palm of the other hand which he gently lifts up a bit above the elbow. Without interrupting the ritual ablution, the faithful Muslim tells me: “My friend khawaja, I am not sending you away, but the muezzin has already called for prayer”.

I didn’t even let him finish talking, to say: “La samah Allah (May God forbid!). It should not be because of me that you arrive late to the appointment of prayer in the mosque”. Taking some coins in my hand, I continued hastily: “I don’t want to leave without settling my account.” I saw him react gently but seriously. “Do not offend me with your words”, he said, while shaking the last drops of water from his hands. “When you come again, I hope to be able to offer you not only drinking water but also lunch and more time to be together, in sha Allah (God willing)”, he concluded.

“Shukran (thank you)”, I answered gratefully. He shook my hand firmly. “Ah, before you leave, accept please my apologies for calling you khawaja (foreigner), without even asking your name”. “There’s no problem in that, not at all; we shall talk next time”, I replied.

PreviousColombia: A Young Church Among Water, Forest, War, and Coca
NextAlgeria: The Cathedral in the Desert