Mexico: “When the Moon Taught Us to Weave” 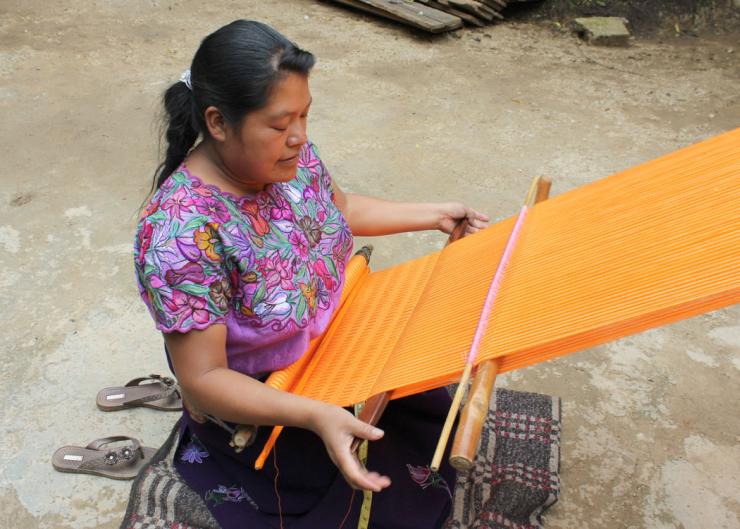 “In the beginning of the world the moon climbed into a tree. And there it began to weave and embroider” – so runs a Mexican legend.

Hands move rapidly across the loom, repeating gestures that have been performed every day from time immemorial. Doña Yolanda smiles; she learned the art of weaving from her mother, who learned it from her grandmother. The desire to create beauty on backstrap looms has not been lost over the years. Mexico has a vast heritage, an expression of the Maya and Aztec civilisations. Spinning, weaving, and hemming were skills reserved exclusively for women; garments bearing various floral, animal, and geometric designs were fashioned one thread at a time.

Fabric was, and still is, a vehicle for symbolic languages expressing the ancestral knowledge and wisdom that has been memorised, reproduced, and reinvented by women over the ages. It represents the constant rewriting of the history of their social groups, of their families, of their lives.

Every culture had a deity for the spinners, weavers and embroiderers. Weaving was much more than the mastery of a technique; it was considered a sacred gift given to women. The most representative traditional garments include the huipil, quechquémitl, cueitl, and rebozo.

Doña Yolanda explains: “Huipils are made from rectangular panels in different colours that are then joined together and hemmed by hand. There is an opening for the head and the sides are stitched, leaving holes for the arms. This is our typical costume. Everyday huipils are very basic. Then there are ceremonial huipils, which are much more elaborate, and the wedding huipil that girls begin to embroider and hem when they are still young. Then there are the mourning huipils”.

The quechquémitl covers the upper part of the body and is made from two rectangular panels that form a kind of short poncho. It is usually made from cotton, although sometimes wool or silk are used instead.

“Every indigenous group has its own characteristic elements,” says Doña Aurora, a weaver sitting next to Doña Yolanda. “These can involve the colours, embroidery or geometric shapes”.

Doña Aurora holds up a piece of cloth and continues. “The embroidery is rich in meaning; it features stories that tell of the past and of the cultural identity of this village. The colours indicate our ethnic group. They are a way of setting ourselves apart from other groups. Some ceremonial garments have a particular shape that points to the name of the woman who wove it. It is as though she put her signature to the garment.”

The cueitl is a rectangular piece of cloth worn around the hips and held in place by a tight band around the waist. Two or three horizontal strips of fabric are usually used. The length of the cloth depends on the region and ethnic group.

The rebozo (shawl) has become the symbol of Mexican national identity. It is rectangular in shape and can range from 1.5-3m in size. It can be made from cotton, wool or silk. There is a tradition of producing shawls in many parts of the country: Oaxaca, Xochistlahuaca, Guerrero, Xilotepec, Calimaya Tuxtepec and Tenancingo, Zamora, Michoacan and Acaxochitlén Tirlancingo, Hidalgo and lrapuato Moroleon, Guanajuato, Santa Maria del Rio and San Luis Potosi.

Estéher Torrez, a cultural expert in Mexico City, is convinced that this heritage is under threat. “The ancestral knowledge of the art of weaving is disappearing. On the one hand, the new generations no longer want to learn, while the introduction of commercial cloth has also taken its toll. Urgent efforts are needed to retrieve, promote, and spread technical knowledge in support of traditional weaving. The patterns and techniques for producing the raw materials, the use of natural dyes, and the creation of fabrics from all parts of Mexico must be recuperated.”

PreviousAlgeria: The Cathedral in the Desert
NextMyanmar: Thanaka, the Secret of Beauty