Myanmar: Thanaka, the Secret of Beauty 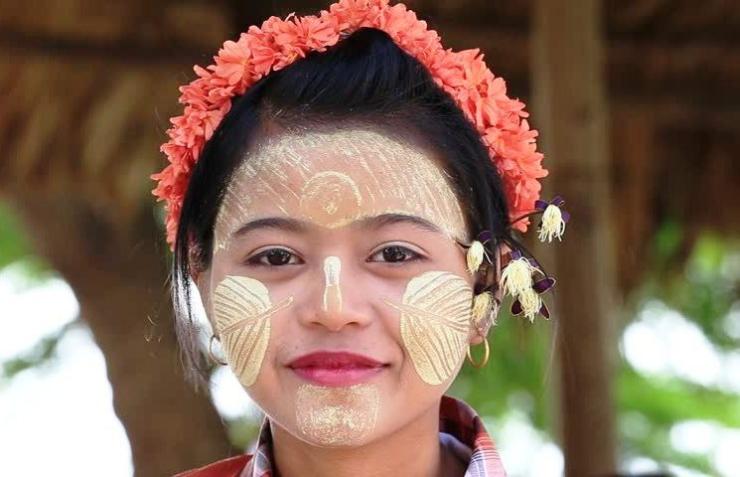 Burmese women’s and children’s use of thanaka is a unique custom. We uncover this tradition’s history and the reasons it continues to thrive today.

Burmese women feel great pride when they are asked to explain the golden paste covering their faces. The paste is a traditional skin conditioner that has been used in Burmese society for centuries and is a cherished part of national identity.

The use of fragrant thanaka is a Burmese household tradition. Every day, after taking a bath, women, children, and even some men paint thanaka on their faces. The Burmese believe thanaka bark cools their skin, tightens the pores, and controls oiliness.

Women apply this cream in various ways, from a casual spread to elaborate patterns, as a light coating or a thick mask. Especially those who work in paddy fields or toil outside for long periods use thanaka as a protective shield on their exposed faces and arms, believing it protects their skin from the unforgiving tropical sunshine.

Wearing thanaka is also a centuries-old method of female Burmese beautification. Some women writers talk up thanaka as a traditional Burmese beauty secret. “Thanaka liquid has properties that make the skin cool and smooth, with a refreshing and chilled fragrance, beautifying the users. It also cures pimples and acne,” the Burmese researcher May May Aung notes.

Thanaka is made from tree bark. Thanaka wood is found in handicrafts such as combs, boxes, and other small trinkets, and the tree’s roots are used as an “indigenous laxative”, according to May May Aung. Traditionally, Burmese women grind the bark of the thanaka tree with a little water on a flat, circular stone called a kyauk pyin. This produces a milky yellow liquid that dries quickly when applied to the skin, forming a powdery protective covering.

The history of thanaka dates from the earliest development of the country. Some believe that the legendary queen of Peikthano, an ancient Pyu city that flourished more than 2,000 years ago, loved thanaka. According to historians, the Pyu people intermarried with Sino-Tibetan migrants who later became part of the Bamar (Burman) ethnicity. The earliest written reference to thanaka in Burma is in a fourteenth-century poem written by a consort of King Razadarit (or Rajadhirat), the monarch who successfully reunited all three Mon-speaking regions of southern Burma. He ruled from 1384 to 1422 and fended off major assaults by the Burmese-speaking northern Kingdom of Ava (Innwa). According to the authoritative book Myanma Thanaka, written by Thar Hla in 1974, the revered novice monk and poet Shin Maha Ratthasara who lived from 1486 to 1529 also referred to thanaka in his work.

Further evidence of the antiquity of thanaka was uncovered following the destruction of the Shwemadaw Pagoda in Pegu, an ancient city located 76 km north-east of the Burmese capital Rangoon, in the earthquake of 1930. Among the ruins was a kyauk pyin used by Princess Razadatukalya. She was the eldest daughter of King Bayintnaung, who assembled the largest empire in the history of South-East Asia and reigned from 1551 to 1581. The valuable antique stone was later donated to the pagoda.

Nowadays, thanks to modern scientific methods, thanaka is available as either a thick cream or a powder, making it easier to use. There are at least 200 brands in Nyaungbinlay Plaza, one of the biggest consumer markets in Rangoon.

Traders who sell thanaka estimate that daily sales of the bark paste are worth many millions of kyat. They also say that many of the thanaka products sold in the market lack the official Ministry of Health stamp of approval.

Sellers claim that while user-friendly cosmetic products are more convenient, many Burmese women remain loyal to the traditional organic thanaka that has been used for generations because of concerns about the purity in the newer products.

“Organic thanaka is more expensive, but it gives you a cooling sensation and protects your skin from arid weather. Ready-made versions are cheap but I have heard they are mixed with soil, so I wouldn’t dare use them,” said Aye Mya Kyi, a retailer at Nyaungbinlay Plaza.

The scientific name of the thanaka plant is Limonia acidissima. The tall, slow-growing tree is native to South and South-East Asia and can grow on dry, rocky soil in areas with little water.

While other nations use its bark, leaves, roots, fruits, and gum for medical and other purposes, only the Burmese wear thanaka as a daily cosmetic and skin conditioner. Burmese people believe the best thanaka plants are naturally slow-growing, taking three to ten years for the trunk to reach two inches in diameter.

Due to increasing demand and a dearth of thanaka trees in natural forests, privately owned thanaka plantations and seedling-selling businesses are flourishing in the Burmese dry-zone, in villages around Yesagyo, Myaing and Shinrnataung townships in Magway Division. According to farmers, around 200 thanaka trees can grow on an acre of land with seasonal vegetables such as beans and sesame.

The thanaka tree is a perennial that is mature for market after three to seven years of growth. Expert growers say the tree needs great care when young because of its vulnerability to insect attacks. This, alongside the normal expenses of the time-consuming plantation business, makes it difficult to reap high profits from thanaka.

In 2006, thanaka was approved for export, targeted at Burmese communities living abroad.

An old Asian proverb says the world’s most beautiful women have a Thai smile, Indian eyes, and Burmese skin. Perhaps the Burmese have thanaka to thank for the glowing reputation of their complexion.

PreviousMexico: “When the Moon Taught Us to Weave”
NextBrazil: The Living Sign of Mercy