Democratic Republic of the Congo: The Smiling Faces of People 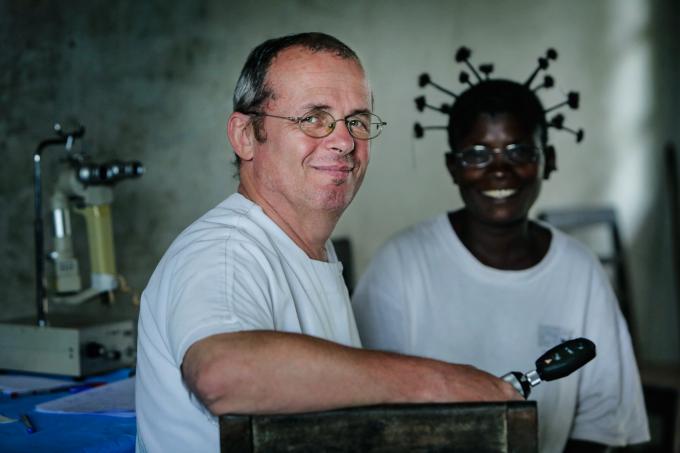 For more than twenty years now, Brother Richard Hardi, a medical ophthalmologist, has been travelling through the forest of the Congo to reach the most distant villages and restore sight to people otherwise condemned to a life of darkness.

His old four-wheel drive vehicle moves slowly along the track deep in the rain forest. Three hours ago, we left Mbuji-Mayi, the main town in the province of Eastern Kasai, in the Democratic Republic of Congo. Between one manoeuvre and the next, Richard Hardi, the only oculist in the area, says: “Even if they live in isolated places, they have the right to assistance. A small operation can make a great difference”. We eventually reach what was formerly a bridge, but the weak, wooden structure has been destroyed by the storm during the night. The road is now a river of mud and too dangerous, so we must go on foot.

The equipment has to be carried and is by no means light. The essential items are: a portable microscope, a machine for sterilising, optical instruments, generators for electrical power, a box of old spectacles, and a hand-made operating table.

“I take some care choosing the place to set up the base-camp. It is usually a village in a strategic position that can be reached by the people from smaller and more isolated communities.”

After several hours, we reach Pania, a collection of huts in the heart of the forest. Already, there are a number of people waiting. Seeing the people, the doctor smiles: “Even though they have no mobile phones, people are quickly told of my arrival by the beat of the tom-tom, the ‘bush-telegraph’ of the forest that quickly send the news from one village to another.”

Richard Hardi is a Hungarian who qualified in ophthalmology in Budapest. In 1995, he came to Zaire, as the Democratic Republic of Congo was then called. “I intended to stay only a few months,” he said, “to gain experience as a volunteer in the developing world… but I am still here.”

What made him change his mind were the thousands of people who every year lose their sight in this forgotten part of Africa. With one percent of the population blind, it is one of the countries with the highest rate of blindness in the world. The oculist adds: “The diseases that damage the eyes can be cured: they include cataracts, glaucoma, and onchocerciasis, or river blindness.”

River blindness is caused by the bite of a black fly that lives near the rivers and is found almost everywhere in the forest. It is a curable parasitic infection – if treated with the right medicine. Without treatment, however, it can cause permanent blindness. “In 80% of the cases, this disease can be avoided if treated in time,” Richard says.

There is also a cultural difficulty. “It is important to help the people understand that blindness is not a ‘contagious curse’ – a belief that makes them relegate the blind to the margins of social life.”

The work of seeing patients goes on until nightfall. Some just need medicine or a pair of glasses. Others need antibiotics, bandages, or disinfectant ointments. But the majority need urgent surgery: “We have special days for operations. In a couple of days we can do from fifty to seventy cataract operations… men, women, and children who come stumbling in the dark and go away smiling.”

Seven year-old Mbedji was one of them, having been blind in both eyes for three years due to cataracts. Her family brought the girl to Dr. Richard from their home town of Nkembe, 80 km from the temporary operating theatre at Kole. They led her by the hand for most of the way, with her grandmother taking her on her back over difficult terrain. She reached the operating theatre on the final day set aside for operations, and Doctor Richard, making an exception to the rule, operated on both her eyes – he doubted whether the family could come back another day. The operation was successful and Mbedji could see perfectly the following day. With her sight restored, she also got her life back: she is now able to play with her friends and go to school, no longer condemned to solitude and misery. Thanks to certain international organisations, treatment is given free.

“I stop work late at night. Using a paraffin lamp to light the surgery, I carry on as long as I am physically able. Tiredness is worse that the oppressive heat and swarms of mosquitoes. This is the life I have chosen, and I would not change it for anything in this world,” Richard comments.

Richard is a missionary Brother and belongs to the Community of the Beatitudes, founded in France in the 1960s. Despite all his work, Brother Richard also finds time for prayer. “My faith helps me greatly in my choice to be at the service of these people. They give meaning to my life. The encounter with the people I meet every day in my work enriches me and gives me the strength to go on. Seeing the smiling faces of people who can see again opens up for me a vast dimension of spirituality,” Brother Richard concludes.

Richard Hardi is the only ophthalmologist in a province counting more than 8 million inhabitants. He is one of only three ophthalmologists operating on children in the whole country.