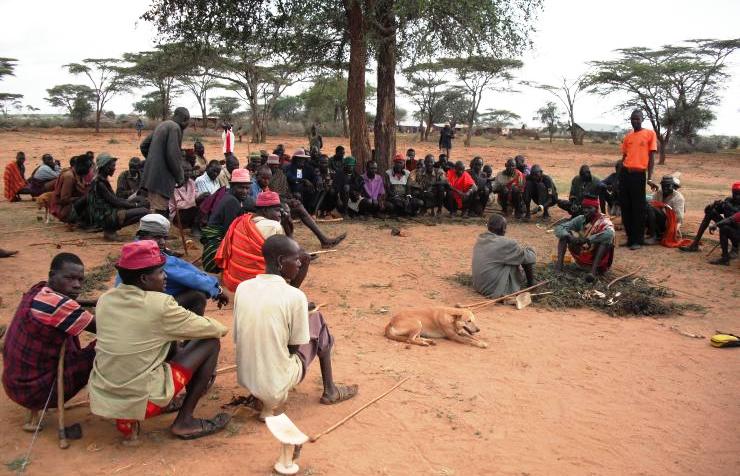 In the Karimojong group, living in north-east Uganda, time is marked by ethnic seasonal festivals. ‘Akitocol’ is one of these. It is the elders’ feast: male youth make offerings of respect to the elderly (ngikasikou) in the form of meat.

Karimojong individuals become official members and can have their say in the community after they go through an initiation ceremony (asapan). In this ethnic group there are two main classes: the senior Ngimoru (Mountains), the elder generation set; and the junior Ngigetei (Gazelles). Each class is divided into five sub-groups, which are subordinated to one another according to seniority of initiation. Members belonging to the junior generation set must make offerings to the senior group – generally meat – as a sign of respect.

Akitocol celebrations unfold once a year, between the February and May moons, at the beginning of the rainy season. The ceremony consists of young people offering to the elders the meat of three oxen and three castrated animals selected from among the biggest ones of their herds, as well as pumpkins, milk, tobacco and a pipe. The young people ask the elderly’s blessing and ask them to pray to God for their life, for an increase in cattle, for abundant rains and food, and to ward off diseases and calamities. This year, the Ngibanga, the last sub-group of the Ngimoru class, organised the Akitocol. The young Ngibanga gather secretly in the wood and, sitting under the trees, decide where and how to celebrate akitocol.

Two days before the celebration, the Ngibanga will have already invited all the elders to the banquet. On the celebration day, in the morning, young people collect the ritual materials. Those among the Ngibanga group in charge of offering animals play a prominent role in the ceremony: they kill the animals with the ritual spear-throwing, remove their skin, roast the meat, and offer it to the elderly. They collect the blood in wooden troughs and mix it with milk. While they get ready to kill the oxen, the elderly arrive. They sit in a semi-circle on their typical wooden stools under a large, wild fig tree, in order of seniority. The initiates among the Ngimoru and Ngigetei can also attend the ceremony. All the others, including the women, are not only not allowed to attend, but they are not even supposed to get close to the place where the rite is held. Once the elders have arrived and all the animals have been killed, those among the Ngibanga, making offerings, start talking with the most venerable elder.

The young Ngibangasi present the problems afflicting the tribes: the poverty they have been suffering since their cattle-herds were decimated by diseases and drought, by poor pasture conditions and smaller harvests due to drought, and by cattle-raiding perpetrated by their enemies. The young Ngibangasi beg the older for help. The elderly, in turn, promise to ward off diseases that afflict cattle, and to bring back the rain. They also guarantee that pastures will be lush again and that enemies will be defeated. At this point, the Ngibanga put down the meat of the animals they killed before the elders. That is what the Akitocol ceremony is about: the young people offering food to the elderly, asking for their blessing in return. The meat offered belongs to the elderly by right and all of it must be eaten where the celebration is held.

While the elderly are consuming the meal, the young Ngibanga leave and gather under a tree to decide who will be in charge of the next akitocol’s organisation. Meanwhile, three seniors extract the chyme from the stomach of the oxen previously killed and smear it on the forehead and on the chest of the people attending the ceremony. This ritual represents the blessing to bring health and prosperity. At this moment in the blessing ceremony, some Ngibanga go to pick up the pipe, the tobacco and the pumpkins filled with milk, which had been left aside near a bush. Then, in procession, they go toward the old ones. The young man who carries the pipe goes first, the one carrying the tobacco follows him and behind them there are other young people, each one carrying a gourd filled with milk. Once they have reached the fig tree, they put down the gifts next to the troughs filled with blood, and offer them to the old people. Those who had the honour of killing the oxen now mix the milk with blood. Some among the old ones of the group get closer, sip the drink, and bless the young men. The feast gets into full swing now. A young man lights the pipe offered to the most venerable of the elderly. Some other young people remove the animals’ skin, cut the meat into pieces and roast it. They offer the well-browned meat to the elderly who only later will invite the youth to join the banquet. At sunset the banquet is over. The old ones gather under a fig tree where they will spend the night. The youth will lay down next to them, as a sign of care and protection.

The morning after the old people drink the blood-milk mixture straight from the troughs, clicking their tongues. Then, some Ngibanga roast one ox leg and three shanks. Once they have eaten the meat, the old people shatter the bones with big stones and suck the marrow. Two young Ngibanga smear with yellowish-black ocher the foreheads and the chests of the people who attended akitocol: everyone must return to his village protected by a special blessing.

PreviousDemocratic Republic of the Congo: The Smiling Faces of People
NextEcuador: Sumak Kawsay as a Way of Life