Ecuador: Sumak Kawsay as a Way of Life 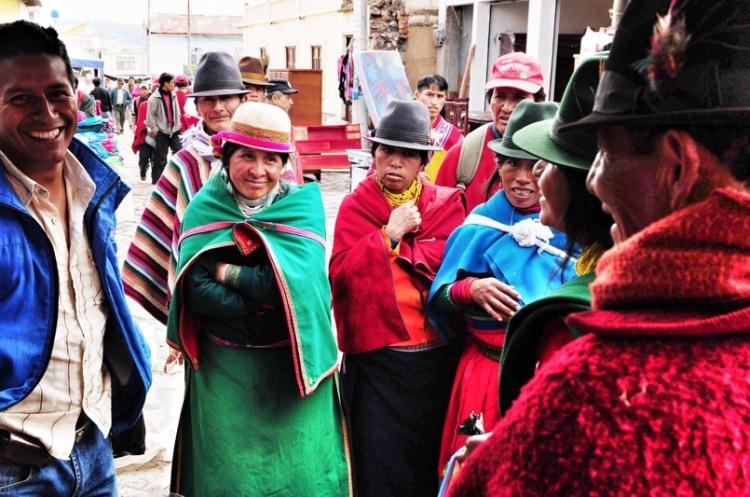 The indigenous concept of ‘good living’ can be adapted to Western culture.

Understanding the indigenous worldview involves questioning how we are traditionally taught to face life. For example, knowing how to distinguish between ‘living better’, the basis of Western development, and ‘good living’, or sumak kawsay in Kichwa.

‘Living better’ is a Western model that implies progress and amassing wealth. This varies with a group’s socio-economic status. For the poor, it means accessing a better quality of life – a just goal. However, for the elite, living better means getting more goods and power, while the middle class strives to reach the elite’s standard of living.

On the other hand, good living [Sumak Kawsay, or Sumaq Qamaña in Aymara] in the indigenous world “entails an ethical, restrained way of living. It takes from nature only what is necessary for life, without endangering [nature’s] rights, since nature is considered a living Mother,” according to Gerónimo Yantalema, a member of Ecuador’s National Assembly.

Several examples of good living practices have been implemented for decades in Ecuador, including in Salinas, a desert town in the Bolivar province in Ecuador’s central highlands.

In the 1970s, Salinas was one of hundreds of extremely poor indigenous communities. Four decades later, Salinas is thriving with community businesses run under a common brand: ‘El Salinerito’.

It started with a small-scale dairy production in the rectory and a booth at the market in the country’s capital, Quito. The idea was to produce communally, linking the factory with small indigenous and campesino milk producers. Early on, there was some support from international co-operation organisations; today, there are 22 partners in the cheese production co-operative.

‘El Salinerito’ is not only a true business consortium that produces, for example: milk, pizza, wild mushrooms, chocolates, sweets, textiles, and handicrafts. It has a small sugar mill and fish-farming activities. It also markets other agricultural produce and has established a network of solidarity economies encouraging new projects, training other communities, and taking part in financial consortiums and marketing networks.

Revenues are reinvested in new social projects that benefit the entire community. “The whole town of El Salinerito shares the production, marketing, and benefits. We started this before good living became famous, and we can say that we are practising good living now,” one of the founders and current administrator, Alonso Vargas, said.

In the central province of Cotopaxi there is another village, Tigua, which like Salinas encourages community production, but based on indigenous art and culture.

Siza Toaquiza, a young painter and popular singer who belongs to the third generation of ‘Tigua painters’, said: “My father, my grandfather, and my great-grandparents painted on sheepskin, as our ancestors did. They painted the history and traditions of the communities of Tigua. When they began to sell, all the communities began to sell as well, and now our art is known worldwide”.

Tigua is another example of communal production and closeness to mother earth. The art’s international success has not changed its traditions. On the contrary, it has prevented new generations of indigenous people from emigrating, and highlights the opportunities community living provides.

Siza Toaquiza, a 19-year-old leading figure in indigenous popular music, said: “My father, Alfredo Toaquiza, is an internationally famous indigenous painter. He is president of the Tigua Society of Artists, but still lives in town because he also works in agriculture. We produce our own food, both for the family and the community. That’s good living: taking advantage of everything the land gives us, but not letting that change who we are”.

Applying this indigenous worldview in the Western world would give primacy to the collective and solve some problems that are a result of the Western development model, such as transport.

Prioritising public transport and limiting the production of private cars would reduce pollution, save natural resources, redefine the car industry, and reconfigure road plans. It would help level the balance of payments between wealthy countries and developing ones, freeing up funds for investments in health and education. It would reduce noise, making cities more inviting.

Similarly, the communal structure that has allowed indigenous peoples to survive can be applied to the design of community neighbourhoods.

According to Javier Alvarado, head of the National Confederation of Ecuadorian Neighbourhoods (CONBADE), “government programmes should look at the neighbourhoods’ abilities to provide goods, like food and clothing for nearby schools, to manage resources such as water, and to implement community market systems”.

CONBADE has a national proposal to create community governments in urban slums, which would encourage investment in social programmes through coordination between local officials and neighbourhood representatives.

Linking technological development to benefit the human being will prevent accumulating power and capital based on knowledge appropriation and hijacking.

“Knowledge is collective and access to it is free. The idea of patent registration is alien to the indigenous world, since it involves taking something that belongs to the group,” Assemblyman Yantalema said.

These and other practical applications to life in our society involve a different mindset, because Sumak Kauwsay, rather than an economic model, is a cultural transformation. It means rethinking survival and once again embracing the communal model as a life principle.