Bangladesh: Pedalling for the Poor 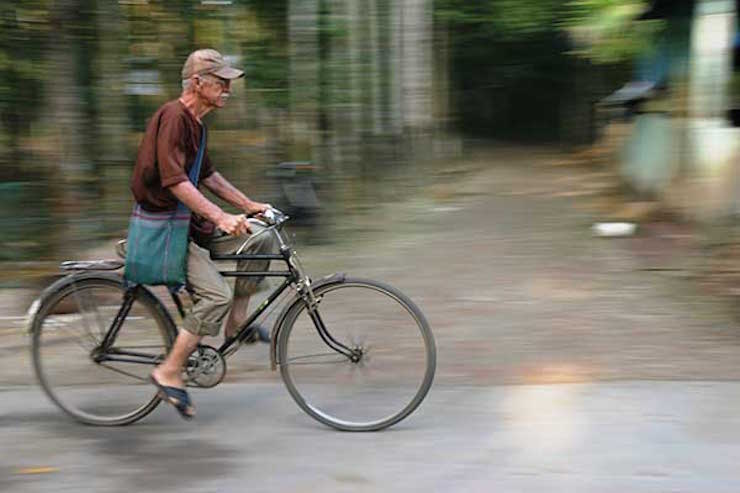 At the age of 78, Father Bob McCahillan, an American Maryknoll missionary, still rides his bicycle on the countryside roads of Bangladesh to meet and help sick people – especially children. He is a sign of Christian love among Muslims and Hindus.

Along the roads of Bangladesh he is greeted as Bob Bhai (‘Brother Bob’ – bhai is Bengali for brother). Father Bob has been serving the Bangladeshi poor for 38 years. He is an intrepid cyclist. He rides tens of kilometres every day – sometimes up to 70 – to visit the villages and meet the children most in need of medical assistance. Since he arrived in 1975 he has resided in 10 towns. Usually he stays in a town for only three years. He defines the first year as “one of suspicion, the second one of trust, and the third one of affection – when it is time to move on to another town and continue my ministry of friendship and healing among Muslims and others”.

When he arrives in a town, he rents a room until he manages to set up a makeshift hut on the outskirts. The hut is made of jute sticks over a foundation of clay soil. The roof is reinforced with a polythene sheet to protect it from the rain.

The small hut easily accommodates the few things needed by the missionary: a wooden bunk bed and a low stool, on which Father Bob sits to pray, read, or write. There is also a little shelf to keep a few essential books, a one-burner kerosene stove, and a pail for water. The leftover food supplies (rice or bread) are hung from the roof in plastic bags, to keep them away from the mice. The hut also shelters Father Bob’s bicycle during the night.

Father Bob’s day starts very early. He gets out of bed at 3.30am for a full hour of meditation, followed by daily Mass. While it is still pitch dark, he get ready and takes some breakfast, performs some chores, and sets the programme for the day. Around 6.30am, he is ready to hit the road towards the villages – to meet and help the sick, especially children, to overcome infirmities and deformities.

Many Bengali Muslims think various Christian missionary programmes exist to convert them. Therefore, Father Bob notes: “I am not a proselytiser; I am an evangeliser. The act of love is itself evangelisation, especially among people whose very strong suspicion is that a missionary comes to convert them and uses healthcare, education and social development for that purpose. We must show them complete unselfishness. We are here to show these people love and respect, and leave them in a way that will allow them to do the same while remaining Muslims. Their beliefs resonate very powerfully with what we are doing – loving”.

On Friday evening, Father Bob moves to Dhaka in the company of the sick who are due for treatment in the various hospitals, along with their relatives. The trip takes the whole night as they need to leave the bus more than once and board the ferryboats to cross the rivers. Arriving in Dhaka, almost sleepless, Father Bob has to find his way in the very noisy – even deafening – traffic confusion of bicycles (single, pulling carts and rickshaws), tricycles, cabs and baby-cabs, cars, and bigger and smaller buses that cram the densely populated city. Aggressive and reckless driving is seen everywhere.

After ensuring that the people he has brought have been admitted to hospitals for surgery as intended, he checks on the sick brought there in previous weeks or even months and still undergoing treatment. He spends part of his weekend running from hospital to hospital; meeting patients, nurses and doctors.

Life is mission and mission is life for Father Bob. Not only does he live for the poor, he lives like the poor he serves. The way he lives and what he does gives him inner peace. He doesn’t do it to be appreciated. He was called to do it – a call that matured through prayer and commitment. He is a living Gospel for those he serves. His life is a sign of God’s loving care, especially for those who are sick.

He started off his missionary life in the Philippines. After eleven years, he was classified as ‘stimulating and happy’, and he subsequently offered to work in Bangladesh. “The idea behind coming to Bangladesh was being a priest-servant”, he says. In a country prone to natural disasters – tidal waves, famines, floods, war – he wanted to make his little contribution to alleviate people’s sufferings.

The fact that Bangladesh is a Muslim country was secondary in his decision. But, soon, he did see the advantage, and he deliberately stresses it: “The fact that Bangladesh is an Islamic country is a big bonus, because in doing the one, serving the poor, we are also doing the other, serving the Muslims; and it has great meaning for them, because they have the saying that ‘by serving the poor, we serve Allah’”. Soon Father Bob will move on to a new town, and he will continue his ministry of friendship and healing among Muslims.

PreviousEcuador: Sumak Kawsay as a Way of Life
NextTanzania: The Maasai Elders