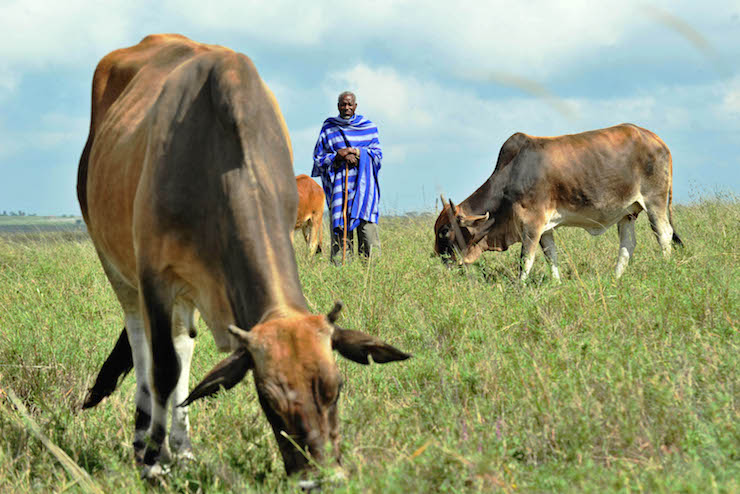 There are two important rituals which ‘aspiring elders’ must undergo before being fully recognised as ‘elders’ amongst the Maasai.

The first of these rites is called Olngesherr and is an approval of the elder status. During the ceremony, the elders take the name of a new group which permanently marks their generation. This complicated ceremony proceeds as follows: an ox without defect is killed by suffocation, its jugular is cut, and its blood is mixed with milk and honey and drunk by each elder undergoing the ritual.

Then the wives of the elders make an enclosure with animal skins. The meat of the ox is roasted within the enclosure and those taking part in the ceremony all gather in the enclosure to eat the meat. Before doing this, some parts of the meat (the breast, for example) are rubbed on the forehead as a sign of blessing. The following morning, further blessings are conferred on the elders, with sour milk placed in empty gourds that were previously washed. Each also receives a new ring made from the soft part of the breast of the slaughtered ox. As a further blessing, ritual white paint is applied by the more important elders to the faces of the new elders.

One striking part of the Olngesherr ceremony is the blessing of the herd staffs of the new elders. Their branding irons are first oiled with butter and honey before being put in the fire. Once they are hot, they are plunged into a container of cow urine; as the hot irons touch the cool liquid, a cloud of vapour rises. The elders shake their herd staffs in the vapour so that they are blessed. The ceremony is concluded in this way: the skin of the ox is ritually spread out, and an elder respected by all plants a green sprout at each entrance to the ‘manyatta’.

The second important ritual for the elder status is called Olkiteng Lorrbaa, which means ‘The Ox that wounds’. It is a ceremony of purification by means of which all the mistakes committed in the past by the elders are forgiven. Each elder must undergo this ceremony individually in order to be able, at the opportune moment, to admit his children to the status of man or woman. During the Olkiteng Lorrbaa an ox without defect is slaughtered, and its flesh is roasted and eaten.

In the evening, the elder is accompanied to the house of his mother by an elder of his age who must be ‘without defect’: he must not have killed anyone, and no brother of his in the family must have died. Joined by other elders inside the house, the elder and his companion eat a special part of the breast of the ox prepared by the elders. All the elders drink beer and honey, bless the one undergoing the ceremony, and sing all through the night. While they drink, the elders intone songs celebrating the fierce bulls, the strongest oxen, and the women they loved in their youth. The Maasai live their lives to the full, day after day, and have no regrets when they reach old age. They always say they have had the best out of life while they were young but are ready to face their future, including death.

In Maasai society, the elders are fathers, sages, medicine men, spiritual counsellors, and judges. They are proud to be the conscience of society, guardians of its laws and its spiritual traditions, and always try to observe discipline and work hard.

They give advice to the young on all sorts of topics, act as mediators in disputes, and decide on the severity of punishments. They keep constant watch to ensure that harmony between the different generations and the various clans is maintained and continued: they are really and truly the wisdom that supports the various pillars of society. It is the elders who organise and preside over religious functions and ceremonies such as the Alamal Lengipaata, the ritual undergone by boys before circumcision. While the Laibon presides at these ceremonies and helps by making amulets, it is the elders of the tribe who direct the process, give advice and see to it that every ritual procedure is correctly followed.

The Maasai elders are known for their eloquence and their love for the truth. During their meetings, sometimes a few of the elders separate themselves from the rest of the group for a private discussion called engilepata, to agree on the best way to present their views. The Maasai love speeches, and the elders know many proverbs and sayings.

Real prestige among the Maasai derives from the personality of the individual. Even if an abundance of livestock and children is important, it is the qualities of wisdom, intelligence, and modesty that give rise to true admiration. The old men acquire the status of elders when they are old enough: the older they are, the more they must be respected. The most respected elder among the Maasai is the Laibon, who unites in himself the functions of spiritual head, seer, healer, expert in rites, provider of talismans and medicine and counsellor of society, especially of the warriors in all that regards their celebrations.

Often the elders will spend the whole day under an acacia, discussing until they reach a final decision convenient to all parties. The elders make up an impartial body which directs the government business of the Maasai, administers justice, and tackles all the serious issues that allow a society to exist and develop. These activities require long discussions and each elder has the right to express his opinion with only a few failing to avail of this privilege. Tradition is their Constitution, and many elders know it well and adhere to it. Feared and respected by the younger generation, the elders look to knowledge and ability in oratory and wisdom to protect and preserve the Maasai way of life.

PreviousBangladesh: Pedalling for the Poor
NextBrazil: The Gospel of Mercy Behind Bars