The Maasai in Tanzania: Peace Ceremonies 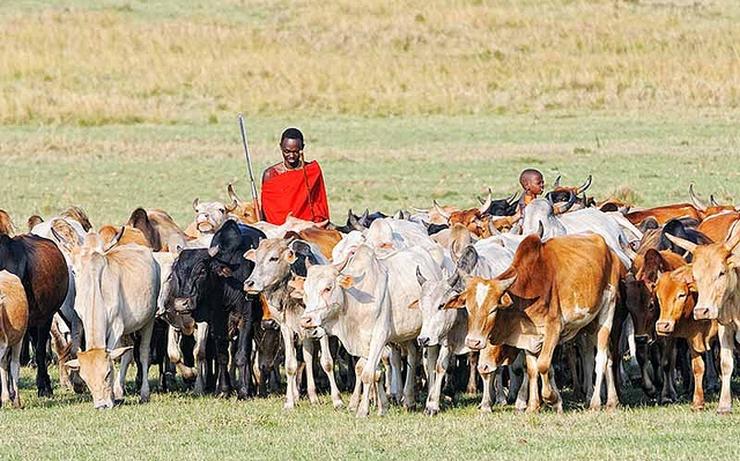 The Maasai of Kenya and Tanzania traditionally have a semi-nomadic lifestyle in the arid and semi-arid lands of Kenya and Tanzania. Their traditional pastoral lifestyle, predominately as cattle keepers, has influenced much of their economy, culture and community. For instance, during periods of drought or famine the Maasai exchange livestock and livestock products with other communities – such as the Kikuyu, Okiek or Kamba. They might for example trade butter in exchange for honey, ostrich feathers, and grain.

In periods of conflict, cows and sheep are usually used to negotiate and reconcile. Black and red coloured cows with white bellies are considered very important.

There is a Maasai proverb which says: Eeta enkoshoke enkitok Ilgilat kumok. Translated this means ‘a woman’s stomach has many sections’, and it is used to explain how the same women can give birth to both a good person as well as a bad person.

White cows are traditionally very important in the Maasai community because they are seen as guides. At times of drought, white cows are sacrificed to ask for rain. They are also involved in other important ceremonies associated with peace and prosperity.

If there is a murder, 49 cows, especially of white or light red colour, are selected to cleanse the murderer. When the murderer pays this fine, the families involved can make peace with each other. In addition, there can also be an exchange of daughters for marriage within the two families, as a seal of love and good will. If sheep are used, 249 sheep are chosen – these can be light red, black, and white in colour.

In addition to animals, the physical environment is very important to the Maasai tribes – especially when it comes to ceremonies. For instance, hills are considered to be important in ceremonies such as rain sacrifices. The Maasai believe that God lives in hills, and they therefore associate them with peace. When seeking peace and blessings, the elders always refer to the hills such as Oloolaiser, Oldoinyo oibor, and Oldoinyo keri, (Ngong Hills, Mount Kilimanjaro, and Mount Kenya respectively). Most of the sacrifices and slaughter of livestock takes place on hill slopes.

Trees are also very important to the traditional Maasai lifestyle. For example, whilst slaughtering a bull one has to choose four trees that belong either to the Olkiloriti (Acacia species), Olngosua (Acacia Egyptica), or Oseki. These trees are said to be blessed and may cleanse the wounds an individual might have caused to others. A Maasai tribesman cannot perform any ceremony, such as circumcising his children, before he slaughters a bull in sacrifice. After the ceremony, he is said to be clean and is not allowed to go to war, because as a father, he must be compassionate in nature.

Grass is also very important to the Maasai. It provides essential food for livestock but is also a ceremonial symbol of peace. To show that one has surrendered, one has to hold green grass in one’s hand. When a person does this, they will not be fought with, because they have surrendered and want peace.

Grass is also used to cover the Iturumet, the gourd, which the elder of a family, who has circumcised a son or daughter keeps at the gate of his livestock. This shows that there is joy and peace in the home or family. It is a sign that seeks blessings and prosperity from God. Where there is no peace, there is no prosperity.

When a young woman is getting married, the father traditionally blesses her with milk and green grass. He tells her to go in peace and prosper. The grass is put between her toes, as well as on her head, in a ceremony which asks that God give her peace during the journey and in her later years.

Much like grass, water is also very important to the Maasai in stopping conflict. When someone is defeated and goes into water, they will not be fought, because they have shown they want peace.

When circumcised, boys or girls who are undergoing the process are washed with well or spring water to cleanse them of their previous sins. In the absence of water, women prepare Enkare entolu, water of the axe, whereby the axe purifies the water. It is then poured onto the individual to cleanse them, so that they may live peacefully in later years.

PreviousBrazil: The Gospel of Mercy Behind Bars
NextMozambique: In the Shadow of the Baobab