The African Harp: Mystery and Mystique 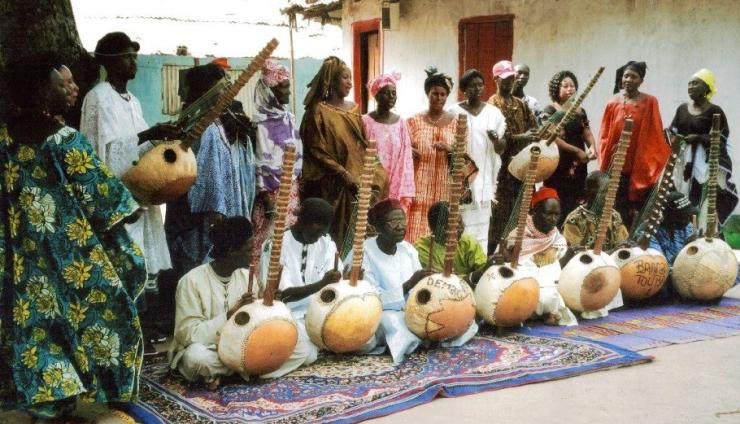 The African harp with its thousand sounds and uses takes the listener into the magical world of the music of the African continent.

Whether large or small, the African harp almost always carries within itself a fundamental paradox: It is both simple and complex. The strings of the African harp, originally intended to accompany singing, vary according to the person who makes it or the region from which it originates. For instance, in Central Africa, among the Fang of Gabon the harp may have just one string. However, the dilla harp used by the Massa of Chad has four strings while the kindé harp found in Chad has five. Among the Pongwé of Gabon the eight-stringed ouombi harp is found and finally the harp traditionally has ten strings if it is from the Isongo and Mbaka in the Congo. The single-stringed harp is used to accompany singing and also as a percussion instrument: the musician beats the rhythm on the sound-box and plucks the string at the same time.

Traditionally the harp is the instrument which accompanies the song for the healing of a sick person. A healer woman practises the abandji method that enables her to transform herself into a supernatural being to help her choose the barks and leaves that form the patients medicine. In this way, the ouombi harp is intended to guide the spirit of the woman. Of all the instruments of traditional African music, the harp is the one that brings man closest to the invisible spirit world. It is a familiar item that enjoys special consideration, not only by the lute players who make it or play it, but by the whole community in which it is used. Many harps are called sacred. They are carved with a head that represents the outline of a goddess, the same goddess to which all the songs, prayers and invocations are addressed. Seen in this way, the harp itself becomes a goddess whose praises are sung and to whom prayers are addressed.

Of all the African harps, however, that which attracts most attention is the ardin which we find almost exclusively in Mauritania. Then we have the kora, played in Mali, Senegal, Gambia and Guinea, and the zither harp called the mvet of the Fang of Cameroon and the north and south of Gabon. In the musical tradition of Gabon it is the woman who plays the ardin harp while the man plays the tidinit, a four-stringed lute with a wooden sound-box.

In Mauritania, music is practised first and foremost by the griot who by themselves a particular category, a caste of the society. The griot, here as elsewhere in western Africa, instruments are passed down from generation to generation as well as the techniques and rituals. The ardin is a harp with ten strings strung between the two sides of a wooden triangle – the strings form the third side. The base of the triangle is glued to a stretched skin which covers a sound-box formed from half a gourd. In some cases, when an ardin player sings alongside other musicians, the ardin player simply beats the rhythm with both hands without plucking the strings of the instrument.

The Kora, is one of the most beautiful musical instruments of Africa both for its appearance and for its timbre. It may be played solo, without any instrumental accompaniment or human voice. Its music is beautiful, its resonance infective and unforgettable. It often serves to accompany songs, prayers or epic stories and poems declaimed by the griot.

In Central Africa, musicians may be found who have a role that is quite similar to that of the griot of West Africa, even though their presence is less widespread in daily life. An example of these are the mvet players, also called toucheurs de citare of the Fang, in south Cameroon and north Gabon.

The mvet is a harp whose strings are strung along a raffia stalk and raised in the middle by a bridge. The sound is amplified by one or more gourds by one or more gourds fixed in place with the help of the bridge and plucked by the fingers of both hands while the player presses one of the sound-boxes to his chest to hold the harp steady. The musician is often dressed in raffia fibres. He wears necklaces, bracelets and many bird feathers. When he appears in the village square he merely indicates a dance step and all those rattles and bells he has around his ankles and arms invite the people to dance around him. Then begins the eagerly-awaited story that will go on through the night and end only at dawn.

PreviousMozambique: In the Shadow of the Baobab
NextSt Martin-in-the-Fields Church, London: ‘The violence of Peacemaking’