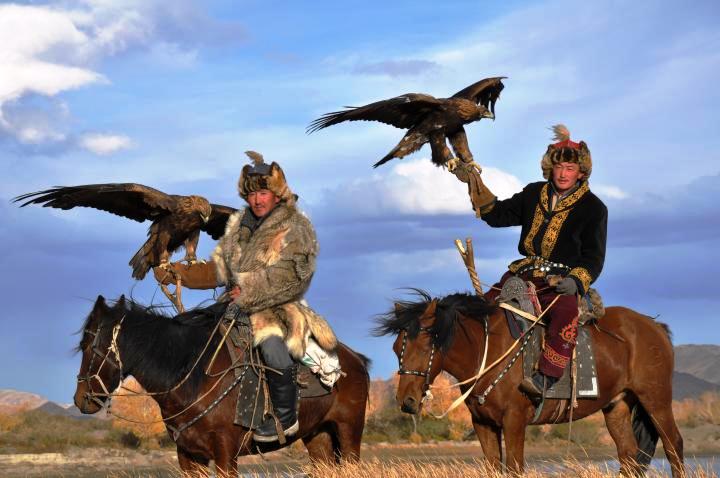 The majestic grasslands, rugged deserts, and snow-capped mountains of western Xinjiang have been home to China’s largest community of Kirghiz for centuries. A Muslim-Turkic people, China’s Kirghiz are the linguistic and ethnic brethren of the Central Asian Kirghiz who constitute the majority of the population of the bordering Kyrgyz Republic.

Herding and hunting have always been the traditional means of livelihood for the nomadic Kirghiz. In the warmer months, the Kirghiz would move their herds from one patch of land to another in the perennial hunt for fresh pasture. In winter, hunting became the main occupation. Day in, day out, hunting parties headed out into the Gobi, a barren desert of shifting sands, rugged outcrops, and low shrubs. Hunts featured a twofold attack: mounted Kirghiz men flushed out game, leaving whirlwinds of dust in their wake, while trained hawks prepared for an aerial kill. Falconry is believed to have originated in either Mesopotamia or Mongolia and China some 4,000 years ago.

Today, falconry is an essential part of Kirghiz traditions and culture. In Akqi, a frontier town near the Chinese-Kyrgyz border in the foothills of the Tianshan Mountains, almost every Kirghiz family keeps a hawk. As they watch over their grazing flocks, locals take time out to train hawks on the nearby Kokshal and Karateke Mountains and along the Toshigan River. The hawk variety on the Pamir Plateau is medium-sized and grey, with short, rounded wings. The hawk joins hounds as essential companions to local hunters.

Last summer, we went to visit Yalangqi, a village a few miles from Akqi Town. Local houses are small, detached cabins made of adobe and hay. “The design is a homage to the nomads’ traditional dwelling, the tent,” one of villagers said. He pointed out that “adobe and hay don’t support large structures, and the smaller rooms of the cabins inhibit heat loss and are more resistant to strong winds”.

In the small plaza of the village we met Makar. He and his seven brothers are said to be among the best horsemen and hunters in the region. Makar invited us to have tea at his house.

Makar’s eldest daughter Guli served us tea and cut the bread. Guli is the only one who lives with her parents. She works in the town, while her younger siblings attend a boarding school. Makar’s wife was baking Nang, the local variety of the circular flatbread found throughout the Muslim world. It is the Kirghiz people’s staple food. Villagers bake a big batch every two or three days.

Talk at the table soon drifted to falconry. Makar said that the bird of prey locals used for hunting, which we lazily call a hawk, actually has as many as 60 sub-species. The differences between them are subtle nuances, such as wrinkles on their claws, stripes on beaks and plumage, or the shape of their feather. The males are generally smaller than the females. Older birds are darker, while younger ones have white down under their wings. The birds live a long time. Their life span ranges from 40 to 60 years. Hawks nest in the mountains around Akqi. Kirghiz people climb to their nests on the rocky bluffs to capture fledglings, but take no more than two in each brood to ensure they don’t decimate the local population.

Makar explained: “Manning – accustoming a hawk to the presence of men – is a critical period in hawk training”. In his backyard is a swing-like installation hung between two trees. A recently caught wild bird is tethered to this swinging perch for seven to ten days. During this time it gradually grows used to seeing humans, and its new master often approaches the bird to build trust. “Tethering the bird to such a swaying perch for several days is done in order to prepare it for the jolts of horse riding in future hunting trips,” Makar explained further. “If it cannot perch firmly on a galloping horse, it won’t be able to pounce on its targets swiftly and precisely when instructed”. Hawks are smart and courageous; falconers should be too. Only men who can dominate a hawk earn control over them. Once a bird detects apprehension or hesitation in the trainer’s eyes, it won’t bow its head to him. To ensure a hawk remains fit, its diet must be closely monitored. The bird cannot be fed till full, or it will flee. Hunger, to some extent, keeps it mentally sharp and alert.

Kirghiz hunters have a bracket on their horse saddles on which they rest their rights arms: the hawks’ perch during the ride.

For game hawking, horses must be hardy, speedy, and agile. Horses lacking endurance don’t cut it in the rough mountainous terrain, where Kirghiz hunters roam for days at a time on each journey. Makar has 16 horses, only four of which are suitable for game hawking. During our stay in the village Makar and his brothers hunted three times. Both riders and horses were in their traditional best for the missions. Men were clad in hats rimmed with fox furs and heavy woollen overcoats woven from camel hair, and their steeds were covered in brilliantly emblazoned rugs, hand-embroidered by their owners’ wives.

Together with seven local men with five hawks, we headed across the village toward the Toshigan River valley. A dust storm obscured the skyline, and the clack of hoofs treading on pebbles on the shore echoed around the great emptiness of the barren land. Fording the river, our horses stumbled several times.

We went on with our search, and soon came across a pheasant. We spurred our horses when we were close enough, and the hawk resting on Makar’s arm shot into the air, swooped and snapped it up. In old times hunting was the main food source for nomadic Kirghiz tribes. Tribes began settling into more sedentary modes of living as modernisation and industrialisation swept the steppe lands over the last couple of decades.

Hunting these days is more about fun than survival, and trips are organised at celebratory events like weddings and family gatherings. Though hawks are no longer relied upon to bring in food, they remain close friends of the Kirghiz. By keeping falconry alive, this desert people continue to pass on their culture of respect for nature’s creatures.