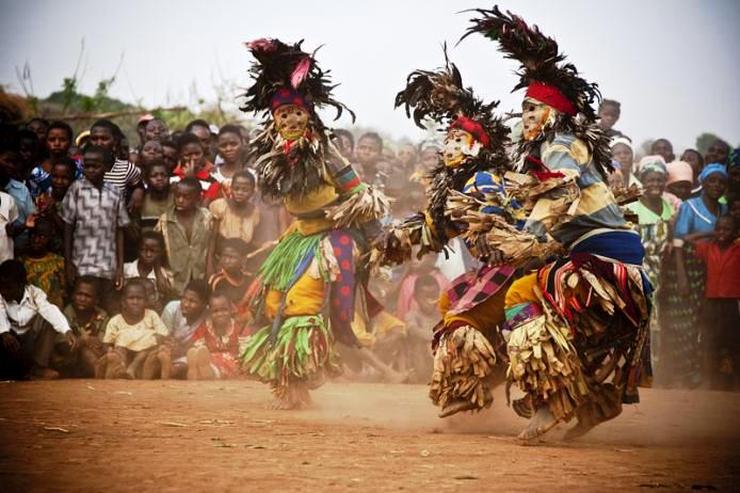 The ‘gule Wamkulu’ is both a secret cult and a ritual dance performed by people wearing character masks or disguised as animals, who represent the world of the spirits. This ritual performance, which is aimed at preserving traditional values, is practised among the Chewa people on various occasions.

Among this population, as in many African societies, the spirits of the ancestors play a key role in all aspects of the individual and collective life. This group believes in the existence of a Supreme Being, a benevolent god who created all living things and who cares about human beings. The Chewa people in Malawi live in an agriculture-based society, whose survival depends on water. That is why they regard the abundant annual rains as the main evidence of God’s care for humanity. Different names are used for God in Chewa society, but the most recurring is ‘Chiuta’, which literally means ‘the great bow’ or ‘rainbow in the sky’ – reflecting the concept of God in this community. Chiuta emerges as the Creator, the giver of rain, the source of life.

Chewa society is guided by a system of ancient rules which regulate the relationships in the community according to a hierarchy. These rules state, for example, that individuals are not allowed to speak directly to the head of the tribe. Intermediaries are in charge of communication between the people and their leader, and vice versa.

They apply the same rule to the relationship between God and men: Chiuta is not supposed to address human beings directly, nor they him. Intermediaries are needed again, and the spirits of the ancestors are best suited to this role, because as ‘spirits’ they occupy the space between Chiuta and men; and as ‘ancestors’ they are interested in the matters of the tribe.

The Chewa people believe that Chiuta has authorised the spirits of their ancestors to give the gifts of life, such as fertility and prosperity, to the tribe. The spirits of the ancestors are considered guardians of traditional customs, and can also cause misfortunes and disease, to punish those who do not behave according to traditions.

The ‘gule Wamkulu’ (‘big dance’) ritual includes songs and dances performed by masked individuals disguised as animals. It is a symbolic representation of the invisible spirit world, performed for various events such as initiation ceremonies, healing rituals, funerals, and so on.

From time to time, the spirits are believed to visit the people of the village to renew their links with them. On those occasions, they drink beer with the adults, symbolising sharing. At the end of the meeting, the spirits remind people of the values and rules of life given to them by Chiuta.

Masked dancers and other members of the ‘gule Wamkulu’ perform several songs and dances, aimed at praising the observance of traditional values and at ridiculing anybody who deviates from them. Each mask and animal figure represents a type of behaviour. For example, the yellow mask (Kuli-yere) represents the good man who behaves honestly, and who is loved by everybody. Whereas a red mask with a single horn represents men who practise witchcraft, whom everyone should avoid. A black and unattractive mask (Kwakana) reminds men that they are supposed to love others no matter what they look like, because there is something good inside everyone. The spirits encourage individuals to stay on the path marked by Chiuta. Compliance with traditional values guarantees Chiuta’s blessing and protection against all kinds of misfortunes.

The ‘gule Wamkulu’ is one of the main symbols of traditional religious and social principles among the Chewa people. This symbolic ritual therefore also represents the opposition to any change that may alter the social order given to the tribe by Chiuta through the spirits of the ancestors. The vast majority of the population does not object to this secret cult, even when it is sometimes influenced by external elements deriving from the Christian religion or Western education.

Vocation Story: Bringing Out the Best in People