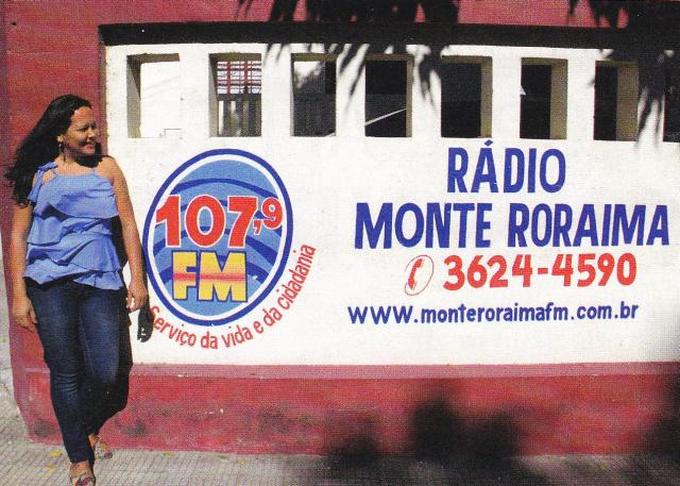 Rádio Monte Roraima aims to inform listeners in accordance with its standards of high quality, impartiality, and ethical reporting, focusing on human rights, the least fortunate, and the environment.

The daylight is so bright: perhaps because the sky is clear, or because Brazil is an equatorial country. The premises of the radio station Monte Roraima are located just a few steps away from the river Rio Branco, next to the Mother Church in Boa Vista, the capital of the Brazilian State of Roraima. The logo and name of the station are embellish a wall outside the building in pastel colours. At the entrance, which is bright and simply furnished, two placards about the station decorate the blue walls. One placard states: “Radio Monte Roraima intends to be a reference point for quality communication in the State of Roraima. It aims to contribute to social transformation through interactive programming”.

The broadcast station focuses on issues concerning social justice, the environment, human rights, and the Catholic faith. The radio’s priorities are: giving a voice to the least fortunate, providing and disseminating information, education, and entertainment, and contributing to the social, cultural, artistic and religious progress of society.

Starting up Rádio Monte Roraima was neither fast nor easy. Monsignor Mongiano, Bishop of Roraima between 1975-1996, was the first to talk about the importance of an alternative source of information through a medium of mass communication: “Over my last years in Roraima I realised that a radio broadcaster would provide the diocese with alternative information. The local media were totally in the hands of the political elite. I was nominated to set up a cultural and educational foundation, which would be in charge of the radio”.

The Giuseppe Allamano Cultural & Educational Foundation was set up in February 1991. Starting a radio station was always one of the projects of the Foundation, but Radio Monte Roraima FM 107 did not become a reality until twelve years later, on 29th December 2002. Now, Monte Roraima is a well-established radio broadcaster, its audience share on the rise. The radio is run by young journalist Janaina Souza, who greets us with a smile and says, “News, education and entertainment are the three major pillars of Radio Monte Roraima programming. The news is our strong point: the radio station broadcasts two daily news programmes – Jornal da manhã and Jornal da tarde – produced by a small team of journalists”. In addition, the radio broadcasts a national news bulletin (Jornal Brasil hoje) in partnership with Rádio Aparecida, a broadcaster that produces the news bulletin for Rede Católica de Rádio, a network of Catholic radio stations in Brazil. “Besides news, the radio also broadcasts educational, cultural and entertainment programmes. Monte Roraima is the only radio in the country that has a programme for children, Cantinho criança (‘kids’ corner’), which is broadcast on Saturdays. The programme A voz dos povos indígenas (‘the voice of indigenous peoples’) is broadcast on Mondays. Monsignor Roque Paloschi, Bishop of Roraima, presents a five-minute programme, Palavra de vida (‘word of life’), every morning from Monday to Friday.”

Disputes over the construction of a hydroelectric plant on the waters of the Branco river have been dragging on for a long time now in Roraima. The dam is called Bem Querer, which translated into English means ‘affection’ – a name that sounds ironic considering the strong opposition the project has generated among the local population. The dam is part of the Growth Acceleration Programme (PAC 2, Plano de Aceleração do Crescimento), and is supposed to be built near Caracaraí, 125 kilometres from Boa Vista, declared an archaeological site by the Institute of Historical and Artistic National Heritage (IPHAN).The construction of the plant is believed to have a potential serious impact on population, environment and climate. The protection of the environment is among the priority issues at Radio Monte Roraima.

Janaina adds: “Rio Branco is our river; we live around its waters. The dam project is a serious threat to people and the environment. This why many are joining us in the attempt to halt the project, such as the Puraké movement”.

The Radio Roraima director harshly criticises the way the project has been managed. “Everything was decided in secret, without involving the people who are likely to be directly affected by the construction of the dam. We demand transparency.”

Radio Monte Roraima is on the front line denouncing irregularities and abuses. “Our task is to give voice to those who would be most affected by the construction of the dam: the fishermen and the indigenous people.” More than once, Rádio Mount Roraima has run into problems with political authorities. “Yes, we have had some problems; it is not easy to be an independent radio. However listeners are on our side and are rewarding us; in fact the audience share is on the rise.” Freedom of speech is not always easy for Rádio Monte Roraima, but it receives high ratings.

PreviousDominican Republic: Network of Participation
NextMexico: The Wisdom of the Mask-Makers