China: The Sound Among the Mountains 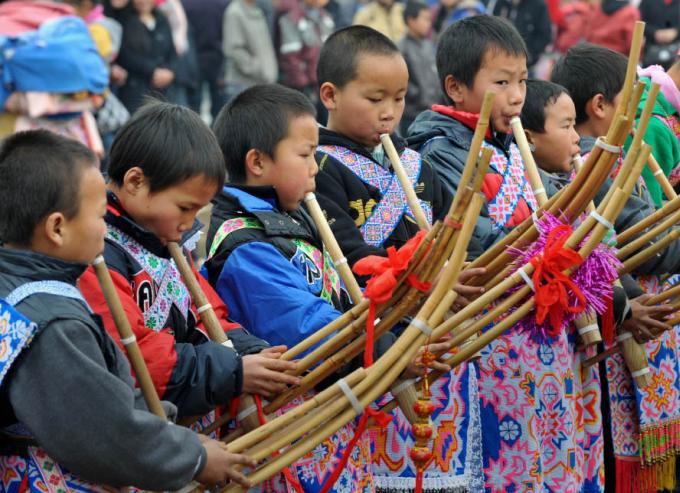 Paika is a rural community of the Miao minority in the hilly Guizhou Province of south-western China. In the local language, the name refers to this mountain village, which produces the Lusheng, a reed instrument.

The village, with no more than one hundred houses, has been known around the province for its Lusheng production over the past five generations. The Lusheng consists of a blowing tube, pipes, reeds, and resonance tubes. Its popularity is widespread among ethnic minorities in south-western China, such as within the Miao, Yno, and Dong ethnic groups. The Miao people are particularly attached to the instrument – its music is a great part of their lives. The Lusheng is played during courtship, weddings, festivals, and other significant events in Miao life. It is also the vehicle of their history, which is passed down from generation to generation through songs. This is where the saying that ‘every Miao man carries a Lusheng’ originates.

Mo Yanxue, 62, is from a Lusheng-producing family in Paika. He began to learn how to make the Lusheng with his father when he was 17 years old, and has stayed in the business since. He said to us: “At the beginning it was difficult to understand why I had to continue this tradition of my family when I had other opportunities. But little by little, I learned to love and respect this antique instrument.” Over his long career, Mo Yanxue has not only honed his skills in traditional processes, but has also developed new designs of the instrument which produce a greater range and quality of sound.

While walking through this mountain village, we come across a bridge over the crystal clear river below. The intermittent music of the Lusheng rides in the wind. These are the Lusheng creators testing and making adjustments to their latest handiwork.

We stop at Wu Yan’s craft shop. He invites us to enter and explains: “Making a Lusheng is a time-consuming process. The method consists of more than 60 steps – the most tiring is polishing bamboo, and the most essential technique that of making reeds.” With Wu Yan are his two sons and a daughter, who are responsible for making the bamboo pipes and blowing the tubes. While they do so, Wu Yan handles the core part of the process of making and, above all, tuning the reeds of the Lusheng. Wu Yan is very careful in choosing the raw material for his reeds. He collects brass gongs, breaking them up, smelting, and remolding them into strips. He said: “A good reed should vibrate 50 times with a single flick. If it falls short of this it has to be remade.” Each day, Wu Yan sits beside the window, gazes at the mountain, and polishes every reed in the traditional way. He explains: “Even what seems a simple task, like chopping the bamboo, is not that easy, as every cut has to be made with the right amount of force. Making reeds is trickier as they are very thin and easily broken.”

The traditional Lusheng has six long unwieldy pipes and features relatively rough handiwork. Thanks to recent innovations and improvements, one can also find models with 15, 20, or even 26 pipes. With more pitches and notes, these Lusheng can be used for playing more complicated melodies. Mo Yanxue explains: “Passing from six pipes to 15 or 26, we have a bigger range and produce a more sonorous tone.”

Discussing the future, Mo Yanxue smiles to us and says: “At this moment I am teaching 10 apprentices, who in turn will soon open their own work craft. Some of them will leave our region, others will go abroad. Recently, the department of culture of Macao bought some Lusheng, with the intention of teaching local students how to play it.” As his instruments are increasingly heard outside of their origins, people still catch the tones of Lusheng being played as they pass through the Paika village. The people of the village, like Mo Yanxue, continue to pass down the knowledge of Miao’s Lusheng to future generations.

PreviousMexico: The Wisdom of the Mask-Makers
NextAfrican Languages in a Time of Globalisation